Elon Musk’s SpaceX has its own town in Texas and now Tesla has an exclusive border patrol lane between the Lone Star State and Nuevo León, Mexico to cut travel time down for its suppliers.

The lane was part of a deal with Tesla when the company moved its operations from Silicon Valley to Austin, Texas on December 1, 2021. Musk said that Tesla, which has been in Silicon Valley since 2003, had also outgrown its Fremont factory.

With the carmakers exclusive border access, the trip for its suppliers is cut down to just 10 minutes – it can be more than 25 minutes during rush-hour.

And hanging above the lane, which sits in between traditional border crossing booths, is a large green sign with ‘TESLA’ shown as it does in the company’s iconic logo.

Ivan Rivas, the region’s economy minister, told Bloomberg that Nuevo León is becoming an ‘electro-mobility hub,’ and that he expects the EV industry to contribute to between five percent and seven percent of investment in the state this year.

DailyMail.com has contacted the US Customs and Border Protection and has yet to receive a response

An image of the TESLA lane, first reported on by Bloomberg, shows SUVs and not commercial trucks, which suggests other employees may also being using the special border crossing.

Musk has previously expressed interest in constructing a Tesla factory in Mexico, according to Electrek, which obtained a recording of a meeting within the company. 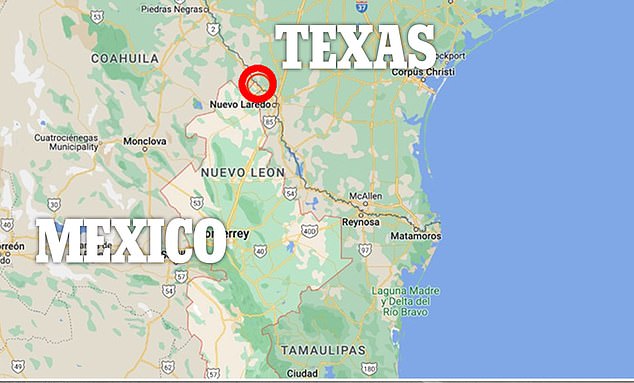 Tesla’s lane sits at border patrol between Texas and Nuevo León, Mexico to cut travel time down for its suppliers

During the meeting, Musk said that Tesla did not yet decide on a location, but is looking to build outside of the US.

‘We are looking at sites, but we are considering some sites options more broadly in North America, so including Canada and Mexico, and the US as well,’ Musk reportedly said during the June meeting.

It was also revealed this week that Musk plans on expanding the already massive Austin, Texas Gigafactory by making it double the 68 acres it currently covers.

The Gigafactory Texas expansion was first reported by Austin Business Journal and the effort is listed as a ‘production support area’ – with filings showing Tesla is working though the approval process.

Tesla reported Wednesday that it had seen higher-than-expected quarterly profits after Musk increased prices this year.

The company on Wednesday reported earnings of $2.27 per share on its $16.93 billion in revenue, a 25 percent increase from analysts’ estimated profits.

Tesla raised prices of its cars several times this year to cope with inflation and production challenges caused by COVID-19 lockdowns in China.

The earnings report comes just weeks after Musk abandoned his $44 billion takeover of Twitter, citing issues with fake accounts on the platform.

The social media giant hit the billionaire with a lawsuit and is trying to force him to make good on his April promise to buy the platform, alleging the ongoing dispute is harming its business.