By Michelle Thompson For Dailymail.Com

Sanders, 80, called on the nation’s ‘extremely wealthy’ to pony up more cash in a tweet Saturday, drawing the attention of Musk, who last week sold more than $5billion of his Tesla stake.

He did so after launching a Twitter poll that guided him toward selling $25billion in stock to fund President Joe Biden’s proposed billionaire tax.

Musk, responding to Sanders’ demands, indicated he wouldn’t draw the line there.

‘I keep forgetting that you’re still alive,’ Musk, the world’s richest man, tweeted at the senator.

Meanwhile, British investor Jeremy Grantham is sounding the alarm on the stock market, warning that Tesla’s stock is in a bubble and doomed to crash.

Democratic-socialist Sen. Bernie Sanders said on Twitter that the nation’s wealthiest people must pay their fair share of taxes 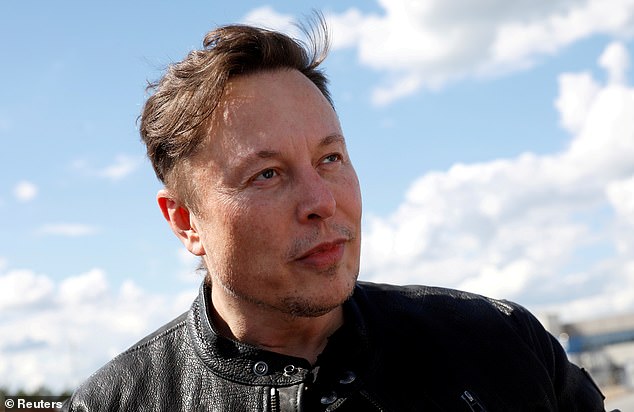 ‘I’m very grateful for Tesla as a dedicated green, that they have pioneered EVs,’ Grantham, of the firm Grantham, Mayo & van Otterloo, told Bloomberg on Friday.  ‘But now in phase two, every great automobile company are all gearing up to go electric.

‘And that owes a lot to Tesla, but now in phase two they’re going to have to have some serious competition.  And to live up to the expectations of the price will be impossible.’

Musk pawned off another $687 million worth of Tesla shares November 11 after offloading $5 billion of his stake in the company in two separate transactions earlier this week, following the CEO’s promise to sell $25 billion worth of the stock.

The string of sales came less than a week after Musk’s much-publicized Twitter poll where he asked followers if he should sell his $250 billion stake in the electric-car maker to pay for the billionaire tax.

In a November 6 post, Tesla’s top shareholder criticized the controversial new tax plan proposed by the president’s administration, saying that he does not earn a salary from the company and his only source of income is stocks, and that the only way for him to pay taxes would be to sell some of his stake. 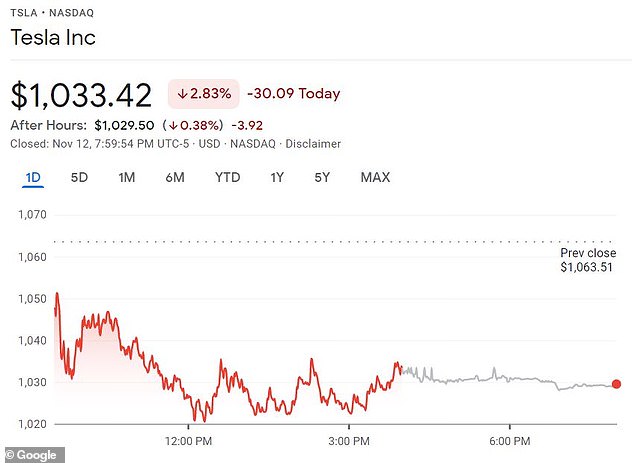 Tesla stocks, reflected above at the close of trading Friday, are likely to crash, a financial expert says

Musk, 50, who founded the car company in 2003, then declared to his 63.1 million followers that he would sell 10 percent of his shares – which would equate to roughly $25 billion – if they approved the move.

‘Much is made lately of unrealized gains being a means of tax avoidance, so I propose selling 10% of my Tesla stock,’ Musk, 50, wrote in the November 6 post.

The exec then implored his 63.1 million followers: ‘Do you support this?’

They did – with more than 2 million of the 3.5 million social media users surveyed voting that he should, spurring the CEO’s massive sell-off.

As of Friday, though, Musk’s lightning-quick liquidation equates to just $5.8 billion – well short of the exec’s promised $25 billion.