Tesco adds to festive cheer on High Street as sales jump 7.2% but Asos and Halfords lose out

Tesco boss Ken Murphy said shoppers are ‘cautiously optimistic’ about 2023 as it celebrated a bumper Christmas.

The UK’s biggest grocer said sales jumped 7.2 per cent in the six weeks to January 7.

Marks and Spencer also toasted a successful Christmas as shoppers brushed off the economic gloom.

Sales up: Tesco, the UK’s biggest grocer, is celebrating a bumper Christmas as it revealed sales jumped 7.2% in the six weeks to January 7

The pair are just the latest to report bumper festive figures following the likes of Next, Sainsbury’s, JD Sports, Aldi and Lidl.

AJ Bell investment director Russ Mould said: ‘It feels like retailers are doing better than feared, with some notable exceptions.’

The UK’s grocers were boosted by families celebrating their first restriction-free Christmas since the pandemic struck.

And fashion firms, such as Next, JD and Primark, benefited from a drop in online shopping as customers flocked back to stores. But in a sign some firms lost out, some retailers unveiled falling sales.

N Brown, the online retailer behind Simply Be and JD Williams, saw sales dip 7.6 per cent in the final quarter of 2022.

And online wine retailer Virgin Wines posted a profit warning after what boss Jay Wright called a ‘disappointing’ end to the year. Shares crashed 24.1 per cent, or 17.5p, to 55p.

Halfords crashed 18.7 per cent after a shortage of mechanics and weak demand for tyres hit its autocentres while bike sales remained subdued.

Shore Capital retail analyst Clive Black said: ‘There are going to be losers.’ He added: ‘In terms of Christmas in the UK, people have been much more careful with how they spent.

But on the back of that, they have not been together for three years so in terms of the retail spending cake, the supermarkets are the big winners. The money people had available, they decided to eat and drink.

‘Online has really suffered and the pure-play online retailers have been exposed.’ Tesco said it snapped up shoppers from its traditional rivals, stemming losses as some customers switched to Aldi and Lidl.

It was engaged in a fierce price war with the German discounters, and said it put on its ‘most competitive’ offering, with more than 600 products included in its Aldi price match campaign.

The supermarket, which controls a mammoth 27.5 per cent of the sector, said it would hit its target, with profit for the year to the middle of April of between £2.4billion and £2.5billion.

Tesco shares rose by 0.9 per cent, or 2.3p, to 246p. Boss Murphy said: ‘In terms of trends for 2023 we’re seeing customers express sentiments of cautious optimism.

‘Customers are weathering the storm, we’re in a full employment market, I think the sense is that maybe the recession will be a little shallower than maybe people were thinking, so there’s a little bit of cautious optimism.’

Sales are Rosie at M&S too 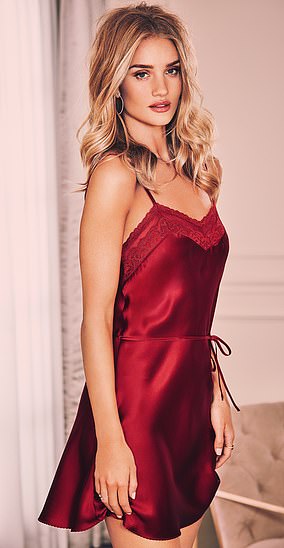 Marks & Spencer reported strong Christmas trading as shoppers snapped up its food and its market share in clothing and home rose to a seven-year high.

The retailer said food sales jumped 10.2 per cent in the last three months of the year, marking a second successive year of record food sales.

It came as shoppers flocked to stores to stock up for family gatherings after three Christmases blighted by Covid.

And after years of struggling with declining sales in its clothing and home arm, it gained its biggest share of the market since 2015.

The retailer, which works with supermodel Rosie Huntington-Whiteley, bucked fears shoppers would cut spending on new outfits and home goods, with sales jumping 8.8 per cent from a year earlier.

M&S said it saw a ‘particularly strong’ performance in menswear, with sales of formal clothes jumping 40 per cent.

This outperformance was driven by M&S doing what it does best; exceptional product at value you can trust.’

It doubled down on its profit forecast of around £500million for the year to April.

Shares rose 1.3 per cent, or 1.9p, to 145.3p as it warned of ‘clear macro-economic headwinds ahead and underlying cost pressures’.

Interactive Investor investment head Victoria Scholar said: ‘After a difficult year, M&S has been picking up lately, rallying by more than 20 per cent over the last month.’