Manager of the £23billion Fundsmith Equity Fund Terry Smith has urged his tech holdings to stop ‘behaving as though money is free’ in 2023 as the global economy weakens.

The Fundsmith CEO said in his annual investors letter on Tuesday that the tech sector faces ‘fundamental headwinds’ amid rising interest rates and slowing revenue growth, and should abandon ‘less promising’ projects outside of their core business.

Like many big name fund managers, Smith endured a torrid 2022 in which portfolio holdings like Meta, Amazon and Microsoft contributed to his strategy underperforming the wider market.

He highlighted Meta – the tech star formerly known as Facebook – and its expensive foray into the metaverse, along with Google-parent Alphabet’s large bets on new ventures, but said it was clear that some of these big spenders were reining things in. 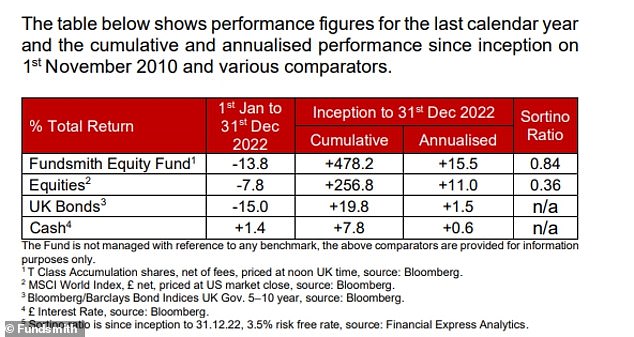 Fundsmith Equity was down 13.8% in 2022 but its long-term returns are strong

Fundsmith Equity, which invests 20.7 per cent of its portfolio in stocks classified as technology, lost 13.8 per cent in 2022 compared to a 7.8 per cent decline for the MSCI World index.

This was a rare period of poor performance for the fund that has delivered a cumulative return of 478 per cent to investors, averaging 15.5 per cent a year, since its launch in 2010.

Smith, who added Apple to the Fundsmith portfolio in November, told investors: ‘As well as the lower valuations caused by higher rates, technology stocks are facing some fundamental headwinds.

‘A slowdown in the growth of tech spending is hardly surprising after the massive growth caused by digitalisation during the pandemic.

‘Moreover, the cyclicality of tech spending and online advertising is probably about to become evident as the economy slows and maybe falls into recession.’

With interest rates yet to peak and the economy set to weaken further, 2023 is set to be another tough year for the tech industry, which typically thrives at times of strong growth and low interest rates.

Fundsmith’s worst performers in 2022 were led by Meta, formerly known as Facebook

Smith is estimated to have pocketed up to £190million last year from his broader investment business.

He said: ‘However, there may be a silver lining in this cloud (no pun intended) as this pressure on revenue growth may cause some of the tech companies we invest in to stop behaving as though money is free and halt some of the less promising projects outside their core business.’

He highlighted Google-owner Alphabet’s ‘hugely loss-making other bets’, warning the search engine and advertising-focused group that ‘lighting does not strike twice’.

Smith added: ‘Amazon…has already withdrawn from food delivery and technical education in India (who knew?). It has a highly successful ecommerce and cloud computing business on which to focus.

‘Meta [is] stopping or cutting spending on the metaverse. Without that spend we would own a leading communications and digital advertising business on a single-figure Price/Earnings ratio.’

More broadly, Smith acknowledged his fund’s poor performance in 2022, which he said gives ‘credence to those who suffer from triskaidekaphobia’ – the fear of the number 13.

However, he added, ‘unless you restricted your equity investments to the energy sector you were almost certain to have experienced a drop in value’.

Smith blamed a poor 2022 on the end of the ‘easy money’ environment of the post-2008 era ‘of large fiscal deficits, where government spending significantly exceeds revenues, and low interest rates’.

He said: ‘Attempts to suppress volatility will only exacerbate it in the long term. If you count the current events, we have now had three economic and financial crises this century and it is still in its first quarter.

‘This final round of easy money post the pandemic led to all the usual poor investments which people make when they are led to assume that money is endlessly available and costs zero to borrow or raise.

‘We can see the unwinding of these unwise investments, for example, in the collapse of FTX, the cryptocurrency ‘exchange’ (sic) and the meltdown in the share prices of those tech companies with no profits, cash flows or even revenues.

‘It is inevitable that when interest rates rise, as they have now to combat inflation, longer-dated bonds fall more than short-dated ones, and so it is with equities with more highly rated shares — which are discounting earnings or cash flow further into the future — suffering 5 more in the downturn than lowly rated or so-called value stocks.

‘This effect can be seen in the bottom five detractors from the fund’s performance in 2022:’ 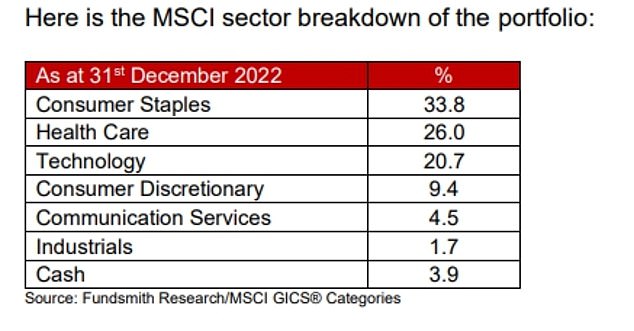