Veteran investor Terry Smith has snapped up Apple for Fundsmith Equity as part of the fund’s wider pivot towards big tech.

The tech-heavy Nasdaq index is down 35 per cent over the year-to-date.

Smith said Apple now held a small position in the portfolio, while also adding elevator company Otis after ditching its Finnish rival Kone over the summer.

The drop in tech valuations has created an attractive entry point for Smith to open the holding in Apple, completing a full swoop on the biggest US tech names.

Fundsmith Equity’s holdings in tech stocks, which now constitute 26 per cent of the fund, have largely followed the sector’s downward trend.

During October, Meta led the fund’s biggest fallers as the stock price fell by around 30 per cent and is now down 74 per cent over the year-to-date.

Apple has fared better than other big tech names in the latest earnings season, in large part because of strong Mac sales linked to new product launches.

Its latest results showed some slowing growth and weakness in its service businesses, but signalled that demand for computers and phones remains strong. 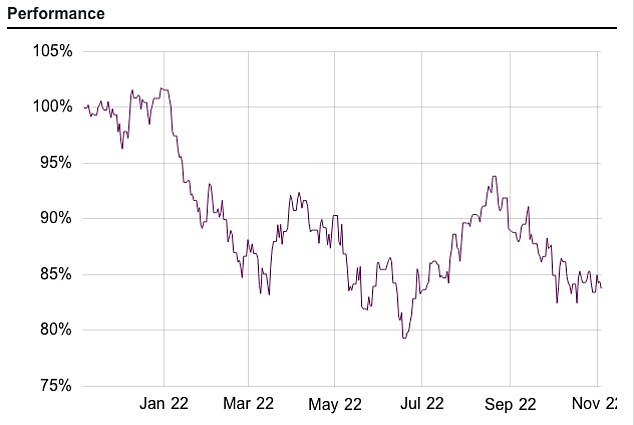 While Apple experienced a 7 per cent bounce following its earnings, it remains down 24 per cent over the year-to-date.

Smith is not a dedicated tech investor but pledges to buy ‘good companies’ – those that can sustain a high return, whose ‘advantages are difficult to replicate’ and those which don’t require significant leverage to generate returns.

The fund’s best-performing holdings were in the healthcare and pharmaceutical sectors, with Stryker, IDEXX and Novo Nordisk among the five best performing holdings. Visa and Adobe also performed well, despite the wider tech rout.

Fundsmith Equity was flat in October, underperforming the MSCI World index which gained 3.9 per cent over the month and is down 16.4 per cent since January.

In September, Smith shocked the investment industry by announcing plans to close his emerging markets fund.

He shuttered the £325million Fundsmith Emerging Equities Trust (FEET) as its performance was not living up to expectations.

He said at the time: ‘Whilst FEET has made a positive return since launch in 2014 it has fallen below our expectations and, unlike other fund managers who might seek to hold on to the fund for the sake of the fee income, we feel it would be in the best interests of shareholders to receive their investment back in cash through a liquidation of the portfolio and wind-up of the company.’