Dashcam footage has captured the moment a van swerved across a dual carriageway and flipped onto its roof after trying to overtake.

The footage, filmed at around 9am on June 1, shows the white van suddenly veering across both lanes of Churchill Way South in Salisbury.

After overtaking the vehicle filming, the van smacks into the central reservation and ricochets onto its side before turning upside down.

Debris flies from the white van as it spins to a halt, and a wheel can be seen travelling down the road as the filmer’s car pulls over.

The dashcam clip, filmed at around 9am on June 1, shows the white van overturn, sending debris flying across the road in Salisbury 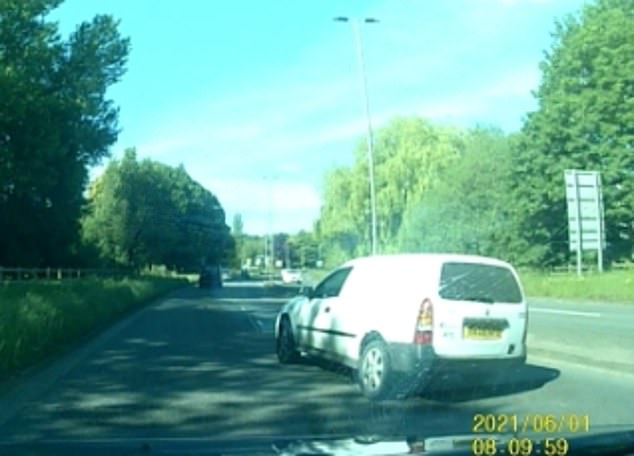 The passenger in the car said his wife, who was driving, told him the van driver had been ‘gesticulating and waving his fist and arms about’ while behind them.

The witness, who asked not to be named, told MailOnline: ‘At the next roundabout where we turned right, he was delayed by traffic.

‘Once he was able he then came zooming up behind us and tried to cut us up.’

Paramedics had treated the motorist at the scene and he was taken to hospital for further treatment.

Police said his injuries were not believed to be ‘life-changing or life-threatening.’ 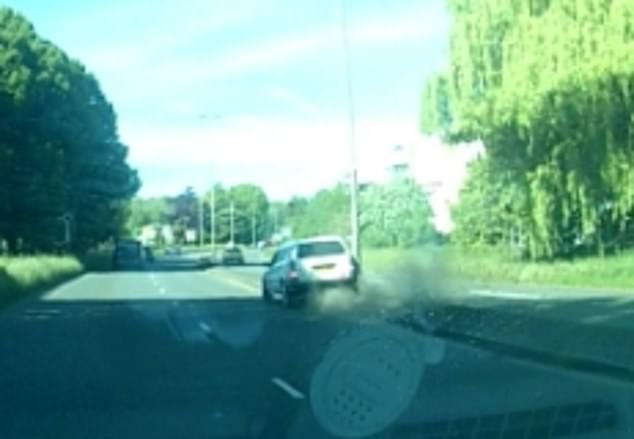 The witness said he went to help the man following the crash.

He said: ‘By the time I had got there, a van driver had stopped and was helping the [man] out of his van by the driver’s side window. His head was quite badly cut.

‘I did manage to ask him if he was OK, which he replied that he was. He kept muttering about what a … stupid thing to do.

‘As he was OK and by then a lot of people were around him I went back to our car and told my wife to drive on. I must admit I did not have a lot of sympathy for him.’

A Wiltshire Police spokesman said: ‘At around 9.05am we received a report about a single-vehicle road traffic collision on Churchill Way South, in Salisbury.

‘It involved a white van and paramedics are treating the male driver, who has suffered back and head injuries, which are not believed to be life-changing or life-threatening.’