A young man who ‘tombstoned’ from a sea stack in Devon sparked a coastguard rescue incident after plummeting into the water from the jagged cliff and injuring his leg.

Several emergency services teams were sent out to Imperial Hotel by the Peaked Tor Cove beach in Torquay on Saturday at around 3.30pm after a man sustained leg injuries from jumping in the sea from a height.

At around 2pm, a group of 12 teenagers were filmed jumping one after another from the vertical rock column.

The clip shows a large group of youngsters standing on the edge of the cliff before plummeting below.

Locals have called for railings or safe platforms to be put up on the notorious Torquay rocks to prevent further, more serious injuries happening in future.

A witness who took the video, told DevonLive: ‘It looked very dangerous. The noise when they hit the water was very loud. And some of them looked very close to the rocks on the way down.’

A Maritime and Coastguard Agency spokesperson said of the incident: ‘At approximately 3.30pm today, HM Coastguard’s Torbay and Berryhead Coastguard Rescue Teams, Torbay RNLI lifeboat, South West Ambulance Service, and HART were sent to assist a casualty with a suspected leg injury on the coast of Torquay.

‘The casualty was brought from a less accessible part of the beach by the lifeboat and passed into the care of the ambulance service.’ 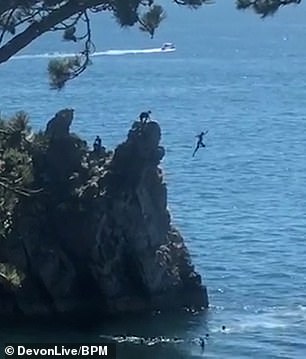 Several emergency services teams were sent out to Peaked Tor Cove beach in Torquay on Saturday at around 3.30pm after a man sustained leg injuries from jumping in the sea from a height. Less than two hours later, teenagers were filmed (pictured) tombstoning

A spokesperson for HM Coastguard Area Commander for South Devon & South-East Cornwall Coastline confirmed on Twitter that the tombstoning teenagers and the injured casualty were linked.

On Twitter, he said: ‘A young man [was] evacuated from Imperial Ledge following an injury sustained whilst tombstoning this afternoon.’

While some local Torquay people have argued that railings should prevent more incidents like that of Saturday at Peaked Tor Cove, some said the teenagers should be left to ‘have fun’ while young.

A Facebook user said that barriers being erected ‘don’t make a difference’ as people will ‘still jump off the railings’.

One also added: ‘Put rails up and spoil our coasts for silly idiots… I don’t think so!’

Another said: ‘If people want to be stupid enough to put their own lives at risk, even though there is enough warning signs of the dangers, then that’s their own responsibility and we shouldn’t waste resources on rescuing them.’

On the other hand, one person suggested: ‘Perhaps they should build a proper safe diving board in a safe area where there’s no hidden rocks or obstructions and only open when there are lifeguards to supervise. 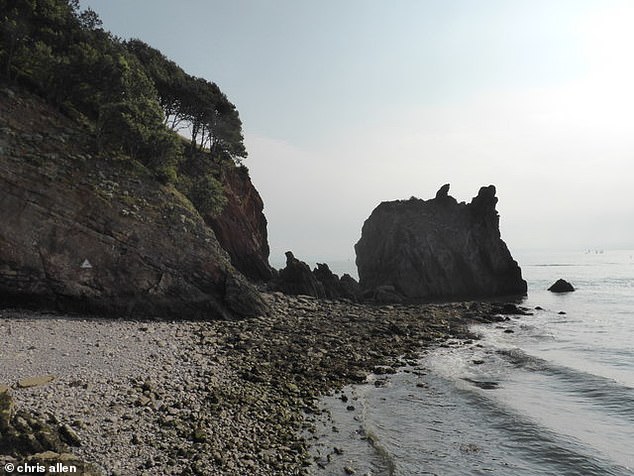 A spokesperson for HM Coastguard Area Commander for South Devon & South-East Cornwall Coastline confirmed on Twitter that the tombstoning teenagers and the injured casualty were linked (pictured, file photo of Peaked Tor Cove

‘Perhaps voluntarily or a small fee for users. It might reduce tomb-stoning.’

The Coastguard recently issued a warning labelling tombstoning a potentially deadly activity that ‘ruins lives’ after a man was seriously injured during a Torquay cliff fall in 2019.

The man was spotted floating face down by two young men, who pulled him out before he was airlifted to Derriford Hospital in Plymouth.

A woman was left wheelchair-bound after tombstoning from 50ft high Devil’s Bridge in Kirkby Lonsdale, Cumbria, into the River Lune last July.

Libbey Sinden, 22, ‘burst’ her spine on impact, had to learn to walk again and was in a wheelchair for four months afterwards. In only her swimwear she ‘nervously’ peered down before the major fall and said hitting the water was ‘like hitting a brick wall’.

In only her swimwear she ‘nervously’ peered down before the major fall and said hitting the water was ‘like hitting a brick wall’.

The woman from Preston, Lancashire had her fall captured on video where she also appears to struggle in the water calling out: ‘I hurt my back’.

Ms Sinden, a healthcare worker, dragged herself to the edge of the water where she could do nothing but lie down in pain for three and a half hours while the fire service, an ambulance and mountain rescue were called to help her.

She was rushed off for a six-hour operation on her spine at Preston Royal Hospital.

Ms Sinden now begs others not to copy her as she warns of the dangers that jumping off bridges and cliffs into water could ‘change their entire life’.