Terrified passengers aboard a Spirit Airlines flight from Tampa are safe after one of the plane’s brakes overheated and briefly caught fire upon landing in Atlanta on Sunday, causing chaos onboard, video circulating on social media shows.

The brakes in the landing gear of Spirit Airlines flight 383 from Tampa ignited upon landing, officials at Hartsfield-Jackson Atlanta International Airport wrote in a tweet about the incident.

Atlanta firefighters put out the fire and the plane was towed to the gate for panicking passengers to disembark, airport officials said.

Spirit Airlines said one of the brakes on the plane overheated.

No passengers were injured and no deaths were reported, the airline publicly shared.

Spirit Airlines Flight 383 from Tampa, Florida to Atlanta, Georgia, caught fire when it landed at Hartfield-Jackson Airport on Sunday, with smoke coming from under the aircraft. One of the plane’s breaking wheels caught fire

‘The aircraft was towed to the gate where guests safely deplaned without any injuries. Thank you to the Atlanta first responders for immediately meeting the aircraft,’ a statement from the airline read.

‘The plane will be temporarily removed from service for maintenance,’ it added.

Footage from inside the plane shows worried passengers getting up from their seats and looking outside portholes, observing continuous smoke into the air coming from underneath the aircraft.

Stewards can then be heard telling passengers to remain calm and to leave the middle aisle clear in case of evacuation. 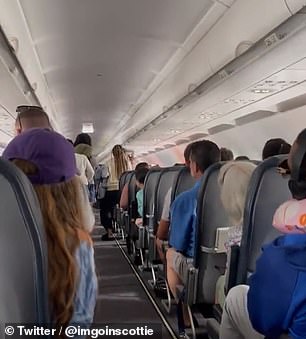 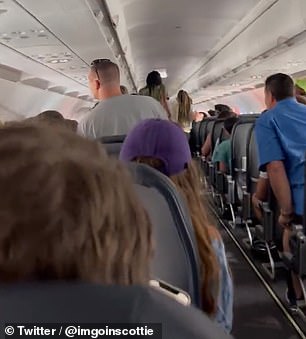 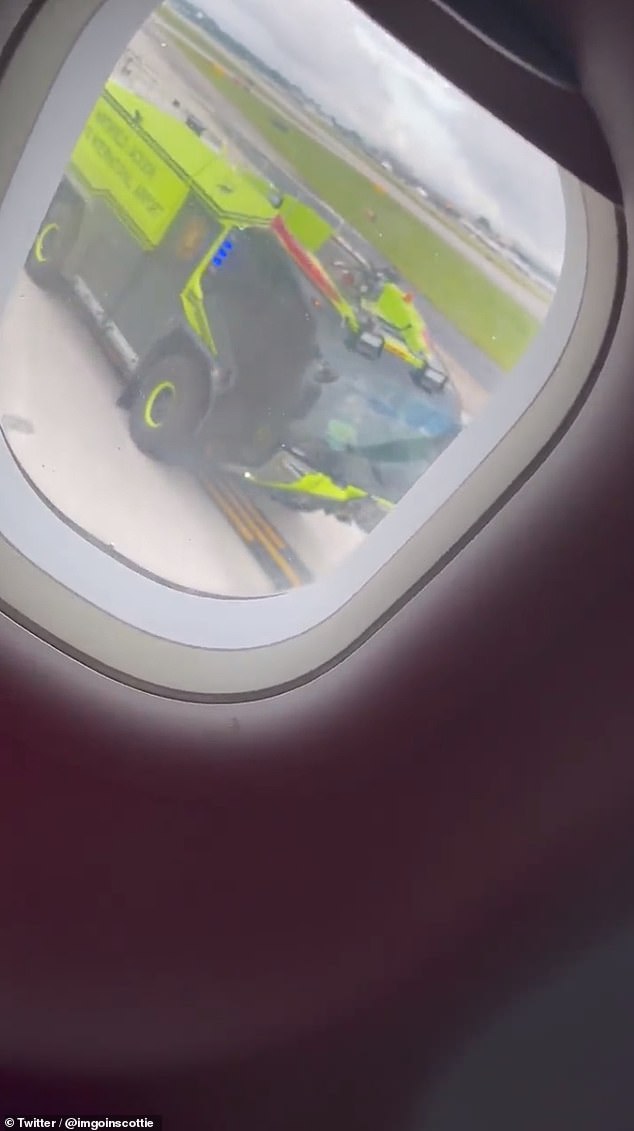 The plane managed to succesfully get to one of Atlanta airport’s gates, disembarking passengers without reporting any deaths or injuries

Scottie Nelms, a passenger on the plane told FOX 5 that the flight was uneventful until after landing and passengers heard a weird noise from the left side of the plane.’

Nobody knew what it was until we stopped completely in the middle of the landing strip,’ Nelms told FOX 5.

‘We saw a flame coming from the engine and people and myself started freaking out.’

Tires on planes are supposedly changed on aveage every 120 to 400 landings, according to German aviation company Hydro Aero.

Aircraft tires are wholistically built to resist wide ranging temperatures that go from minus 60 degrees Celsius (140F) at an altitude of 10,000 meters (32808 ft) to boiling hot when landing in some of the world’s hottest areas.

And even though the chance of a plane catching fire is slim, blazing incidents on aircrafts aren’t uncommon. Plane fires occur, on average, every 10 or 11 days in the U.S., according to Consumer Reports.