A protective mother bear jumped out and attacked a car to stop her cub being run over by an Uber during a night-time drive.

A flash of the large animals eyes can be seen in the distance as the car veers onto the other side of the road in Komsomolsk-on-Amur, Russia, to avoid it but the startled creature still launches an attack on the car.

The bear makes a quick run at it and stands on its hind legs with its front feet on the bonnet, stopping the car dead and scaring the surprised Uber driver inside.

The mother bear begins running at the Uber in Komsomolsk-on-Amur, Russia and jumps up at the bonnet bringing it to a complete stop earlier this week 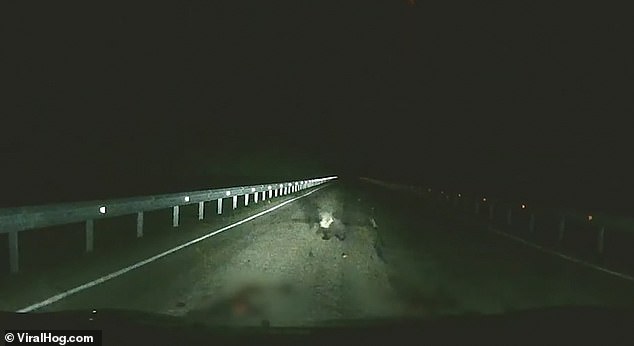 She and her cub then make a run for it across the other side of the road to safety and the driver continues on his drive.

When they get out to inspect the damage there are clear outlines of the bear’s paw prints and scuffs on the bonnet.

They told Viral Hog: ‘I thought that it would cross the road and would not touch me but it attacked the car. 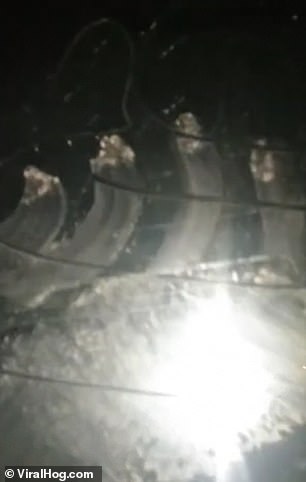 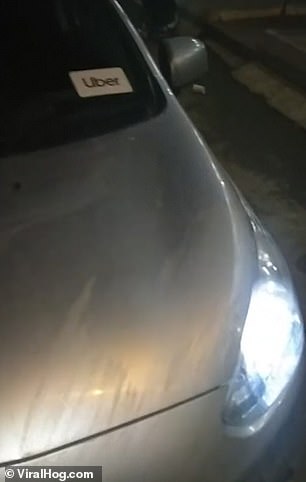 The outline of the bear’s paw was clearly visible on the front of the car, the bonnet was scuffed and the number plate was damaged

It is not clear what kind of bear attacked the car earlier this week but brown and Himalayans are commonly found in the area.

Bears have been known to cause problems in the town in the past, including one brown bear which dug into a grave and stole the recently buried corpse of a man.

The bear was found and shot, but the body has not been found.