A couple who ‘snake proofed’ their home and unintentionally trapped a massive 2.5m python in the process got the fright of their lives when it broke through the plaster and fell onto their driveway.

Luke Huntley, who runs Snake Catcher Noosa, shared the story to Facebook on Friday after the couple from Pomona in Queensland’s Noosa Hinterland called him about their reptile problem.

Mr Huntley said the couple sealed up a hole in their roof after watching a python slither out of the spot.

But a few days later, the couple heard heavy sliding noises in the roof and thought there must be another snake inside.

A couple who snake-proofed their home in Pomona, Queensland after seeing a snake leave its roof, were shocked when they witnessed a trapped python break through the seal days later

Mr Huntley told Daily Mail Australia the couple called him to visit the property once they heard the chilling noises.

Before the snake catcher made it to their house, a carpet python which was around 2.5metres long pushed its way through the seal and found its way out.

‘It would’ve been going around [the roof] for weeks trying to find a weak point, and it found that little weak point and pushed its body out,’ Mr Huntley said.

The home owners were stunned by the encounter and let the python glide its way back into nearby bushland once it managed to break free from the roof entirely.

‘They weren’t too bothered by the snake but more the damage she caused,’ Mr Huntley jokingly said.

Mr Huntley urged people to snake-proof their roofs during the middle of summer when temperatures are high and snakes won’t want to seek shelter in warm areas.

‘Contrary to what people think, snakes don’t actually like incredibly hot days when it’s just sun and 35 degrees,’ he said.

‘So my advice to people who are wanting to snake-proof their roof, wait until the middle of summer when it’s absolutely boiling, and there’s going to be nothing in the roof and then seal it.

‘Then when it comes to late Autumn leading into winter when the snakes are starting to go back into roofs, it’s not going to be able to find its way in.’ 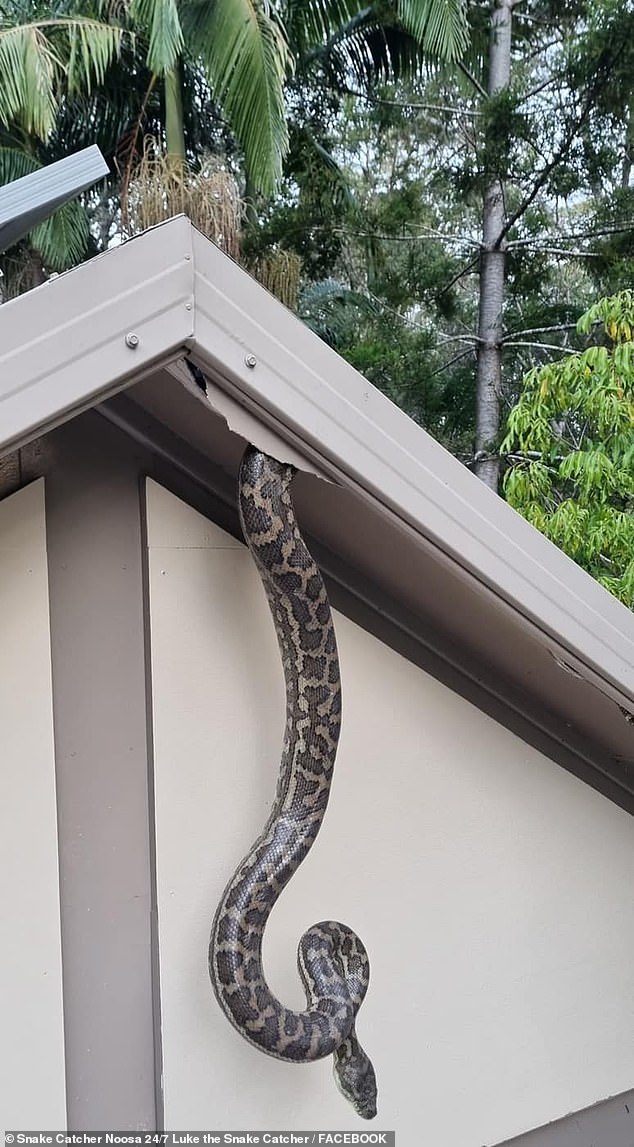