By Rita Sobot For Mailonline

This is the terrifying moment onlookers screamed in horror as a gigantic piece of cliff crashed on to a beach and into the sea just feet away from holiday caravans in the Canary Islands.

A major emergency has been declared on La Gomera amid fears that campers could be trapped under the rubble which plunged onto the beach and created a massive cloud of smoke visible for miles around.

The dramatic incident happened late on Saturday afternoon on the Argaga beach in the popular resort of Valle Gran Rey and was watched by families enjoying drinks in a bar on the sea-shore.

Footage captures the moment the huge chunk of cliff gave way, catapulting massive rocks towards a number of caravans parked on the beach and generating a massive roar. 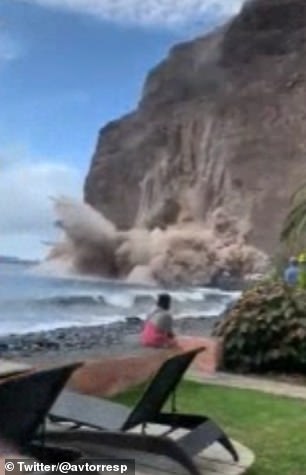 Several people recorded amateur videos from both the beach bar and nearby port, and onlookers can be heard gasping in horror.

The tons of falling cliff can be seen cascading towards the parked caravans and nearly engulfing them.

Reports suggest there had been some walkers in the area where there are warning signs about possible danger from collapses.

The emergency services rushed to the scene and dogs are being used to sniff out anyone who might have been trapped.

The beach has been closed down as there are huge cracks in the cliffs and experts fear more of it could fall. Reports suggest several vehicles were buried, but as yet, there are no reports that anyone is missing. 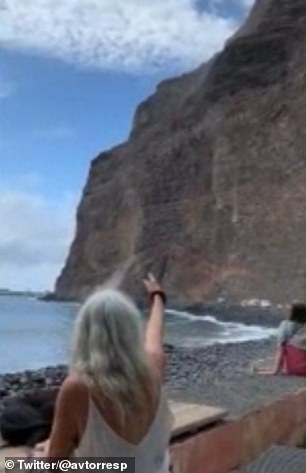 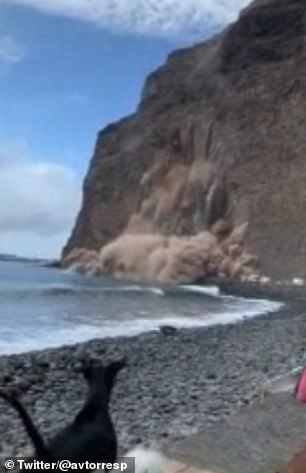 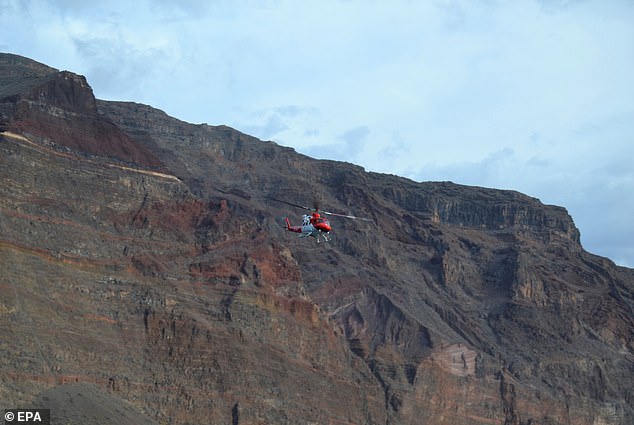 The emergency operation will continue overnight and local residents are being asked to account for all members of their families.

The president of La Gomera’s island government, Casimiro Curbelo, said they were ‘optimistic’ there would be no victims because moments before the collapse, there were small landslides in the area that caused people who were there to move away.

Helicopters were brought in and five caravaners were evacuated because they were stranded.

Firefighters, the Red Cross, Civil Protection volunteers, the police, Civil Guard and mountain rescue were all brought in.

Other emergency workers from neighbouring islands, including Tenerife, have been sent over to La Gomera, together with earth-moving material.