EXPRESS INFORMER > News & Politics > Terminally ill mum, 27, reveals she is trolled for ‘looking too good to have cancer’

A terminally ill mother revealed she is bullied online trolls who accuse her of faking her cancer diagnosis because she ‘looks too good to be dying’.

Jemma McGowan, 27, from from Omagh, Northern Ireland, was diagnosed with stage 4 ovarian cancer in February 2021, and dcotors predicted she would not live beyond May 2022.

The married mum-of-three, who doesn’t leave the house without a full face of make-up and a long wig, says she receives at least one nasty comment every single week.

Despite sharing photos of hospital visits to her followers on Instagram, Jemma is regularly accused of lying about her diagnosis by strangers online.

But Jemma says she’s too busy finding ways to prolong her life, so she can see her children Sadie, five, Louis, two, and Betty, one, grow up, to let it bother her.

Jemma McGowan, 27, from from Omagh, Northern Ireland, who will appear on Stacey Dooley’s documentary series later this month, says she is regularly accused of lying about her cancer diagnosis by strangers online 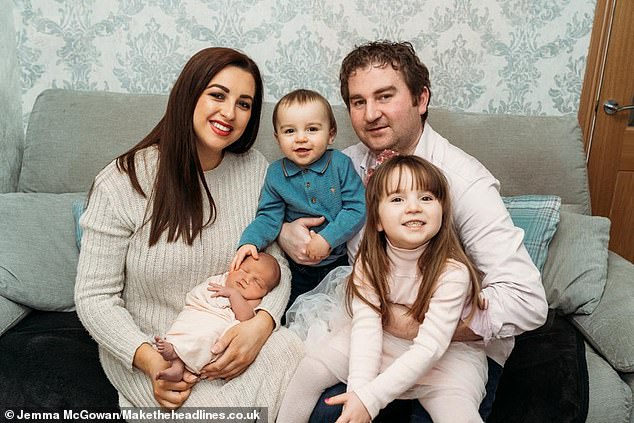 Jemma was told that her cancer had returned shortly after giving birth to her third child. She is pictured with her husband Clive, son, Louis, and daughter, Sadie, just after her youngest daughter Betty was born in 2021

‘I get sent at least one nasty comment per week on social media,’ she said.

‘I regularly get told that I’m faking having cancer. And there’s someone else who keeps telling me that I don’t have terminal cancer as I look too good to be ill.

‘I don’t really get upset or let it get to me as what they’re saying isn’t true. Strangers don’t know what they’re talking about. I feel like writing back “What more proof do you want? Do you want my blood? If I could give it to you I would!”

Jemma was first diagnosed with ovarian cancer in 2016, aged 22, while six weeks pregnant with her second child with her now husband Clive, 40, who she married in 2018.

Terminally ill mother Jemma McGowan, 27, from from Omagh, Northern Ireland revealed she is bullied online trolls who accuse her of faking her cancer diagnosis because she ‘looks too good to be dying’ 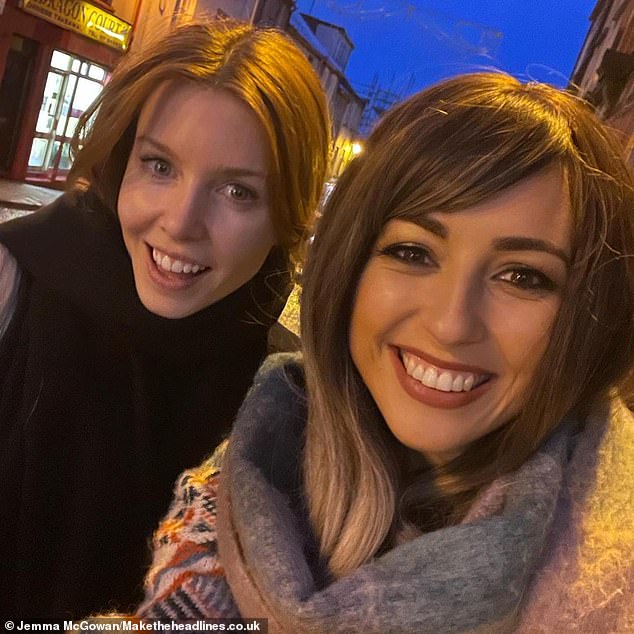 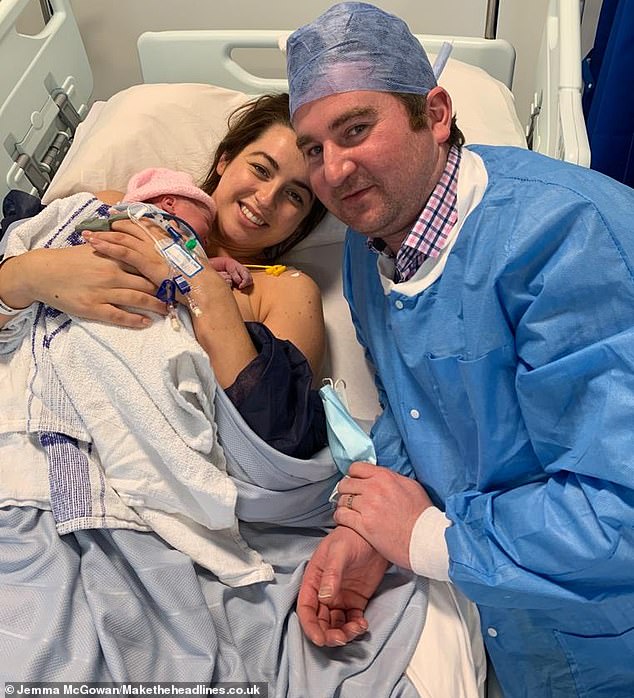 Just 24 hours after giving birth to daughter Betty in January 2021, Jemma was told that her cancer had returned – this time with a tumour in her left lung and multiple tumours in her pelvic and pubic bones

Petrified, she underwent surgery in hospital to have it removed, and was told by doctors it wouldn’t come back.

‘I had a really bad pain on my left side. I went to the GP and he thought I was having an ectopic pregnancy and sent me straight to A&E,’ she said.

‘They told me the baby was fine but I needed keyhole surgery to remove a fibroid on my ovary when I was 17 weeks pregnant.

‘They discovered it was cancer, but had said it was low grade stage 1, so I put it behind me and continued on with my life.’

Jemma didn’t experience any further symptoms over the next four years. But while she was 36 weeks pregnant with her third child, Jemma discovered a lump on her body in January 2021.

She questioned it with her midwife, and was fast tracked for an MRI scan and admitted to hospital to receive steroid treatment to get her baby ready for an early planned C section, which took place just weeks later. 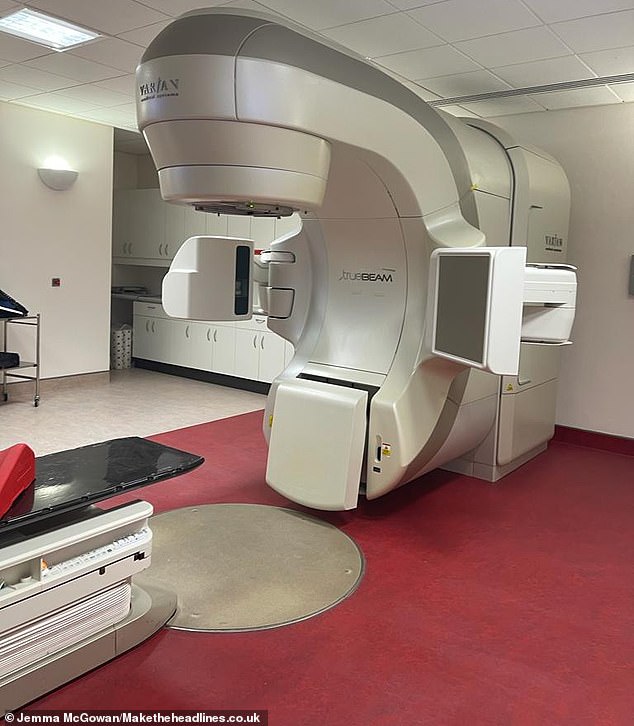 Jemma started chemotherapy when Betty was just two-weeks-old. Pictured, a photograph taken by Jemma in hospital 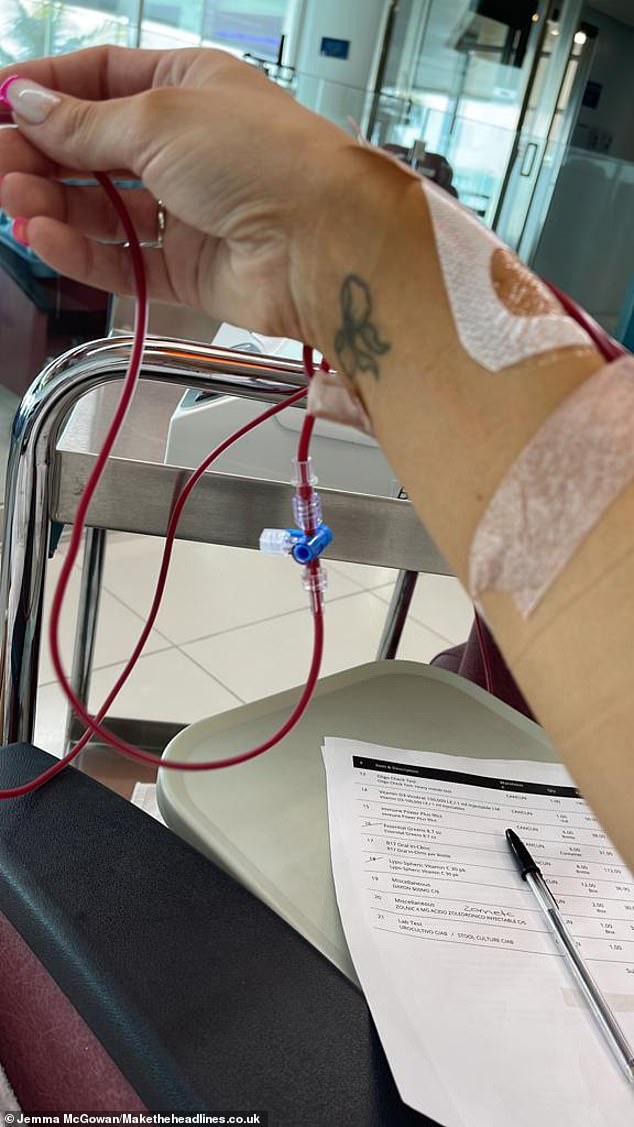 Jemma underwent extensive treatment shortly after her daughter Betty was born. She is pictured in hospital 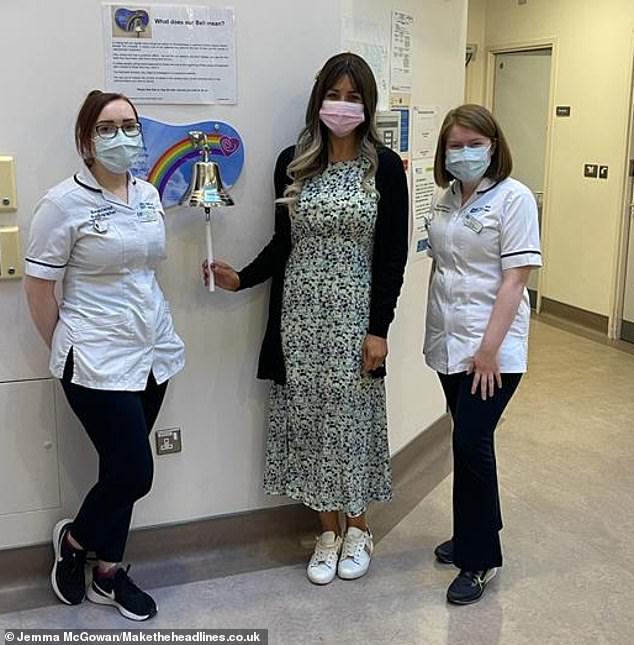 Jemma went through three rounds of two different types of chemotherapy in Belfast, resulting in her hair falling out, as well as vomiting. She is pictured after finishing radiotherapy at Belfast City Hospital in October 2021

WHAT IS OVARIAN CANCER AND WHAT ARE ITS SYMPTOMS?

Ovarian cancer is a cancer of the ovaries, which are part of the female reproductive system that contain their eggs. There are two ovaries and both are attached to the womb. Cancer on the ovaries can spread to the nearby bowel and bladder.

It is the eighth most common cancer among women, and is most common in women who have had the menopause but it can affect women of any age.

About 66 per cent of ovarian cancer cases are diagnosed in the more advanced stages of the disease.

At the time of diagnosis, 60 per cent of ovarian cancers will have already spread to other parts of the body, bringing the five-year survival rate down to 30 per cent from 90 per cent in the earliest stage.

It’s diagnosed so late because its location in the pelvis means the symptoms can be vague and difficult to recognise, particularly early on.

They’re often the same as symptoms of less serious conditions, such as irritable bowel syndrome (IBS) or pre-menstrual syndrome (PMS).

The most common symptoms of ovarian cancer are:

See your GP if:

You have other symptoms of ovarian cancer that won’t go away – especially if you’re over 50 or have a family history of ovarian or breast cancer, as you may be at a higher risk

Just 24 hours after giving birth, Jemma was told that her cancer had returned – this time with a tumour in her left lung and multiple tumours in her pelvic and pubic bones.

Jemma said: ‘The words that stand out to me were: incurable, aggressive and acting unusually.

‘I started chemotherapy when Betty was just two-weeks-old but I was not prepared to give up and tell my babies that I’m going to die. I knew then I was going to fight this.’

Jemma went through three rounds of two different types of chemotherapy in Belfast, resulting in her hair falling out, as well as vomiting.

Then in May 2021, the oncologist team discovered three new tumours growing in Jemma’s body, and they explained that as the chemo wasn’t working, they wouldn’t be able to continue with her treatment.

They advised her to ‘get her affairs’ in order, giving her a prognosis of just 3-15 months to live.

But motivated by the desire to be a mummy to her children for as long as possible, Jemma refused to accept the diagnosis. 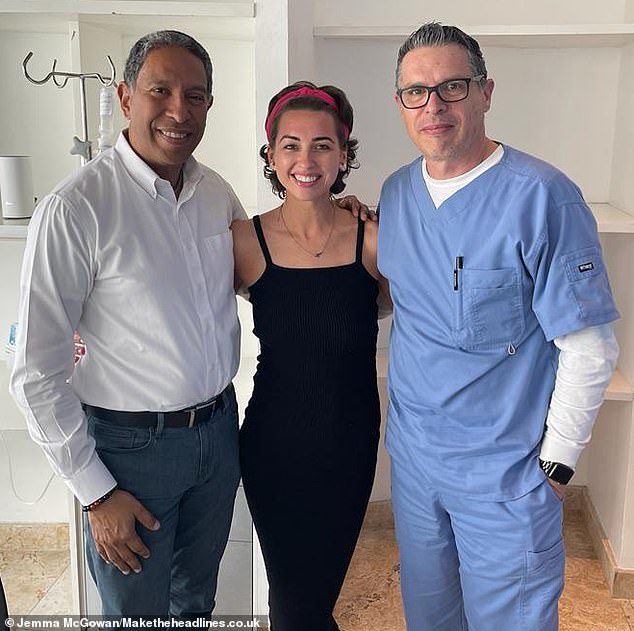 Jemma has started to research alternative and holistic treatment for cancer. She is pictured with doctors at the Hope4Cancer treatment centre in Mexico

‘Chemotherapy made me very ill. It nearly killed me twice. And my tumours were growing when doctors said that it was unethical to continue,’ she said.

‘They eventually offered five rounds of pain management radiotherapy, but the side affects included never having sex again, needing a bladder bag, a bile bag and major surgery.

‘Why would I put myself through five rounds for pain relief when my pain is generally not that bad? Plus, I’m not giving up on my sex life, I’ve given up on everything else, I need something!

‘I fought for high dose radiotherapy and I eventually won 20 rounds. I want to see my children grow up.

‘I’m not asking to be a granny, I just want to be mummy. I don’t want forever, I just want more time, so why wouldn’t I give everything a go?’

Jemma started to research alternative and holistic treatment for cancer. She also decided to document her journey on Instagram. 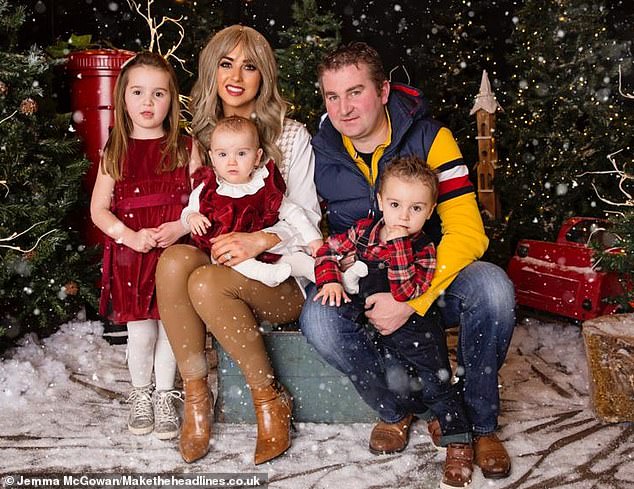 Aged 22, Jemma was first diagnosed with ovarian cancer in 2016, while six weeks pregnant with her second child with her now husband Clive, 40, who she married in 2018. The family are pictured last Christmas 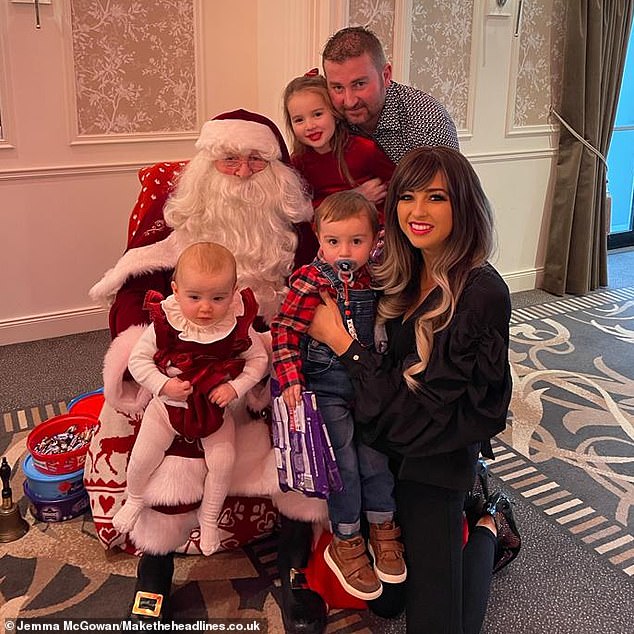 Jemma says she’s too busy finding ways to prolong her life, so she can see her children Sadie, five, Louis, two, and Betty, one, grow up, to let trolls bother her. The family are pictured during the christmas period last year

She also found a controversial clinic in Mexico that offered alternative therapies for cancer but the trip would set the couple back £90,000.

Jemma, who was running her business selling used cars, launched a GoFundMe page and publicised it on social media.

Family, friends and strangers rallied round, raising more than £170,000 to date. It was enough for Jemma to book the trip.

‘Clive and I flew out to Mexico in June 2021, where the doctors there set me up with a protocol and, in my case, it’s all natural supplements,’ Jemma said.

‘I take a lot of repurposed drugs and medicines that aren’t passed by FDA so they aren’t approved or available in this country, and are in clinical trials,’ explained Jemma.

‘I get medication from Mexico every six months, and then medication from London every eight weeks. It costs me about £2,500 every month. The fundraising is quite literally a lifeline.

‘I recently got back from going to Mexico for the second time and it’s given me a re-boost and encouraged me to keep on track. I don’t see dying in May as an option.

‘My diet is also very strict – I have no sugar, no white carbs, no cow’s dairy and no meat protein. I do a lot of juicing and a lot of fasting.’

Jemma now feels like she is on the right path and is adamant that she is able to ‘heal herself’ and prolong her life.

But she’s not in denial of the inevitable.

Appearing in a new documentary with Stacey Dooley called Stacey Dooley Sleeps Over which airs on W on April 19, Jemma breaks down in tears as she reveals she’s creating memory boxes for her three children. 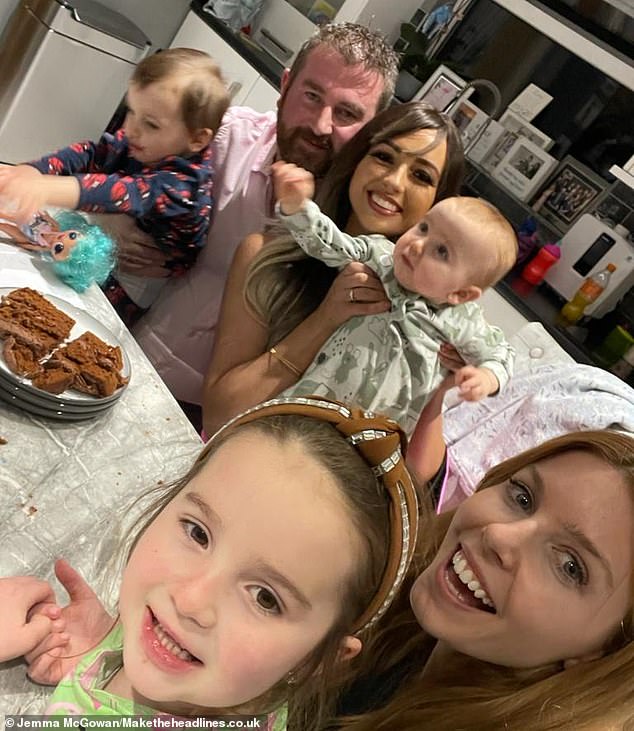 Jemma, pictured with husband Clive, their children and host Stacey Dooley, breaks down in tears as she reveals she’s creating memory boxes for her three children 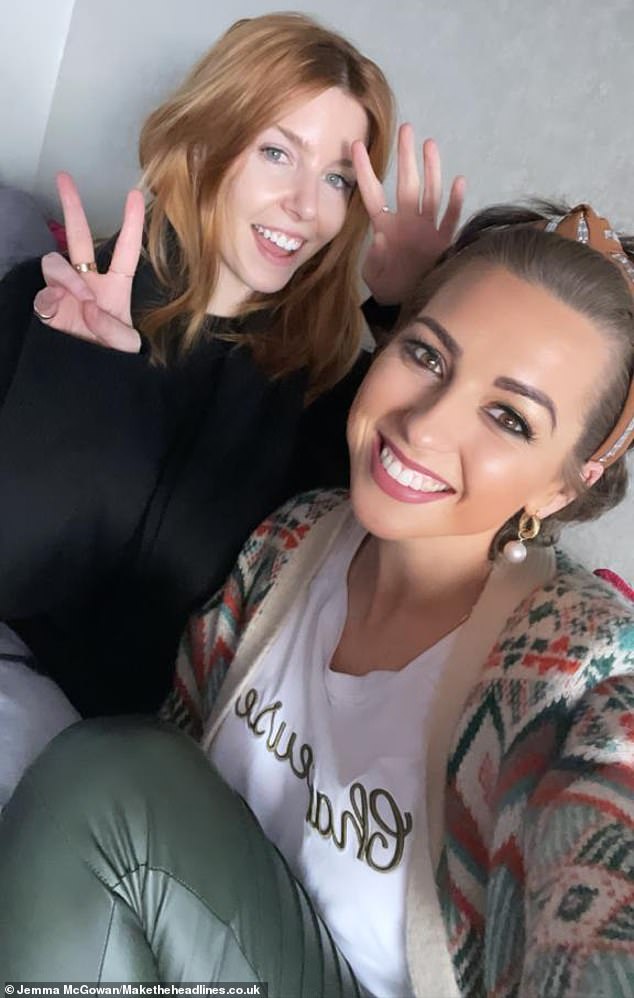 Jemma,pictured with presenter Stacey Dooley, has launched a GoFundMe page to aid research into her illness and help provide her with life-saving medication

She has also bought future gifts for them to open on big milestones such as their 18th birthdays, passing their driving tests and their wedding days.

‘I want them to remember me and know that I was thinking about them. Clive doesn’t really want to talk about it, but he’s not much of a talker!’ Jemma said.

‘Every time I approach the subject with him, he changes the subject. But I’ve told him to promise that my kids will never call another woman mummy.’

Amazingly, with her positive outlook, Jemma feels like she has been given a gift.

‘None of us knows what tomorrow brings. I feel like I have been given something special as I know there’s a big possibility that my days are numbered,’ she said.

‘Someone once said to me that you could go out tomorrow and get killed in a car accident. I have something special, I know our fate so I can cherish what I have left and have time to prepare.’

Stacey Dooley Sleeps Over: Mum Fighting the Clock in which Stacey Dooley spends 72 hours as a house guest with Jemma will be airing on Monday 25th April at 10pm on W.