Real Housewives Of New Jersey star Teresa Giudice had the time of her life during her honeymoon in Greece and Italy with new husband Luis Ruelas, 48.

The 50-year-old reality TV diva loved the vacation so much, she shared several photos.

The Bravo beauty could be seen in her blue Fendi two piece as she kissed Ruelas on the lips while on the beach in Calilo, Mykonos.

Bikini babe on the beach: Real Housewives Of New Jersey star Teresa Giudice had the time of her life during her honeymoon in Greece with new husband Luis Ruelas, 48, and is still posting flashback photos on Instagram 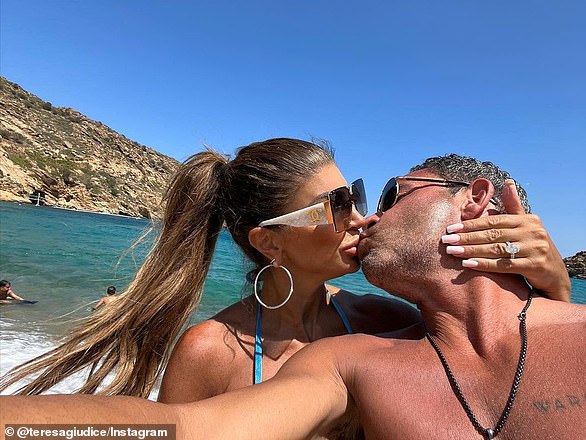 ‘Calilo the island of Love ❤️ # my husband,’ wrote the ex-wife of Joe Giudice in her caption for her 2.3million Instagram followers.

In another post, Teresa can be seen beaming as she receives kisses from Luis while modeling a plunging silk cream and gold cocktail dress that she paired with large hoop earrings as well as cute pink kitten heels.

The stars have been generous with sharing their images from the romantic getaway.

All last week both Teresa and Luis posted images from the Mediterranean holiday on their Insta Stories. 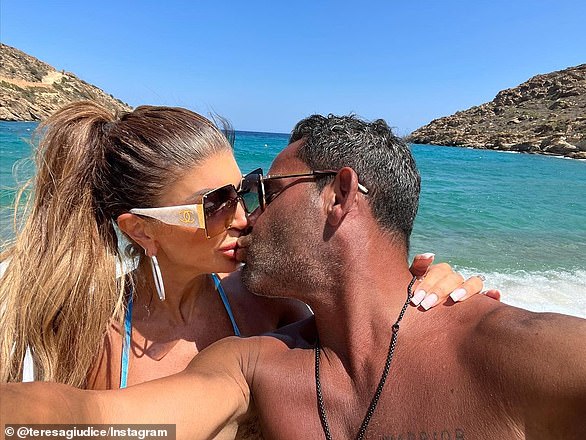 Happy wife, happy life: ‘Calilo the island of Love ❤️ # my husband,’ wrote the ex-wife of Joe Giudice in her caption for her 2.3million Instagram followers The good life: She not only had on a Fendi bikini top, she also wore oversized Chanel sunglasses Her backside: This image was taken from the back as she sat on a Calilo towel; she was also flashing her diamond eternity wedding band

One of her best posts was from Thursday where she had on a two piece as she posed next to her shirtless husband.

The TV star looked toned while both held wine glasses while on the island of Mykonos in mid August.

‘Alemagou Beach Club,’ she wrote in her caption calling the location ‘paradise’ before saying Luis was ‘my love.’ 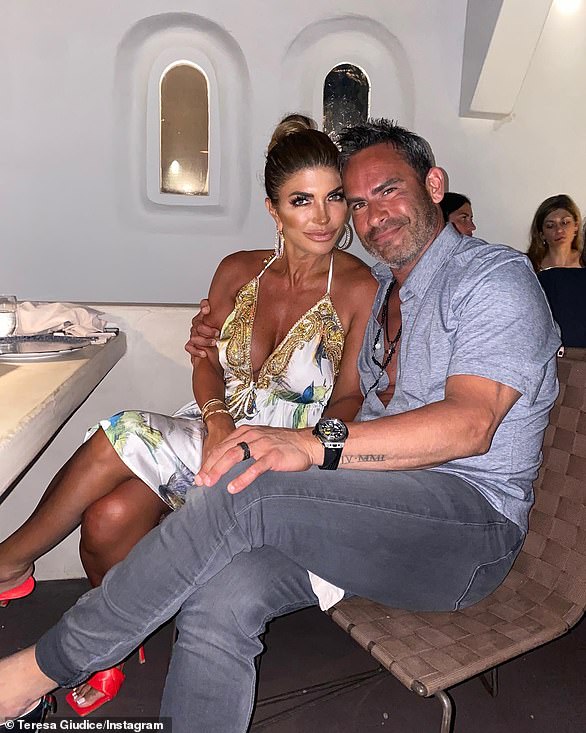 Taking a break from her bikini: In another post, Teresa can be seen beaming as she receives kisses from Luis while modeling a plunging silk cream and gold cocktail dress that she paired with large hoop earrings as well as cute pink kitten heels

The Bravo standout was seen in a turquoise string bikini with a triangle top and tiny briefs as she added sunglasses and jewelry.

Giudice leaned into her husband who wore blue shorts and no shirt.

They were both holding glasses of white wine as they stood in a cabana that had a primitive looking frame with a carpet on the platform. Chairs and a wood swing were nearby. 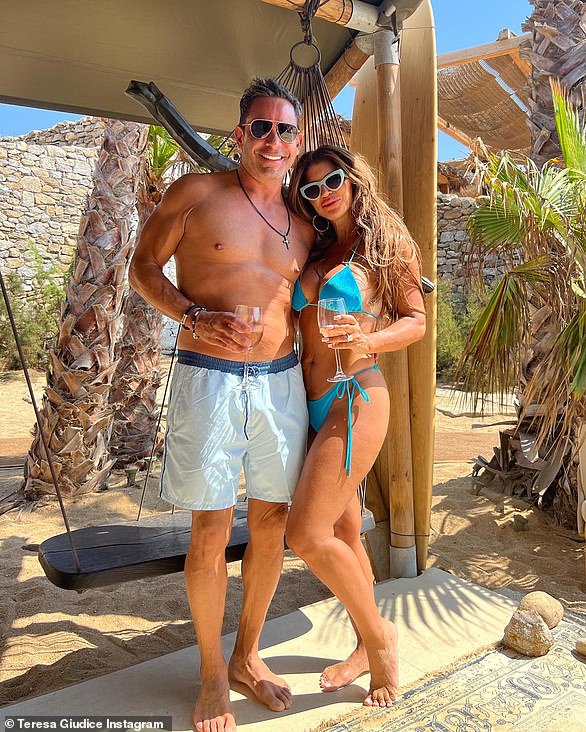 On the beach: One of her best posts was from Thursday where she had on a two piece as she posed next to her shirtless husband. The TV star looked toned while both held wine glasses while on the island of Mykonos in mid August 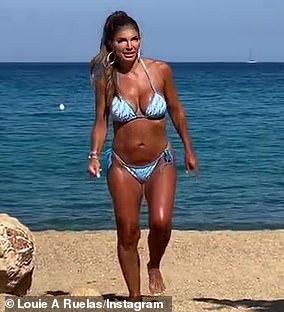 New Jersey in the Mediterranean: The star was seen in a blue Fendi bikini as she walked up the beach in Mykonos; the clip was filmed by husband Luis. On the right she was seen blowing a kiss to her spouse 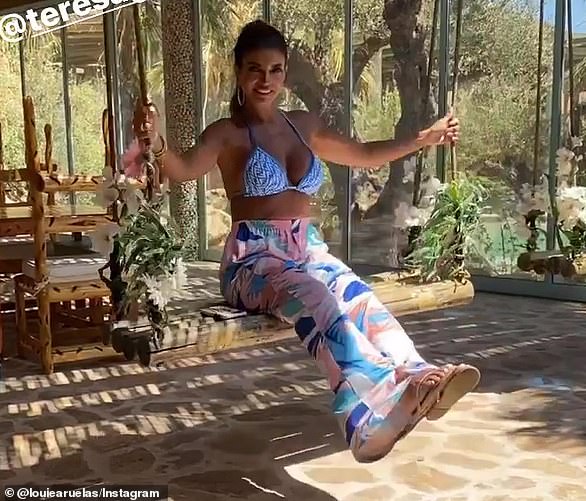 In the swing: And he also shared this image of his new wife in a bikini top and slacks while on a swing at their hotel

This comes a week after they made out on the beach in Mykonos, Greece as seen in photos obtained exclusively by DailyMail.com.

This comes after they spent time in Positano and Capri in Italy.

The duo were seen on a speed boat as they stopped by the ‘Cave Of Love’ which is better known as the Blue Grotto as they sipped white wine. 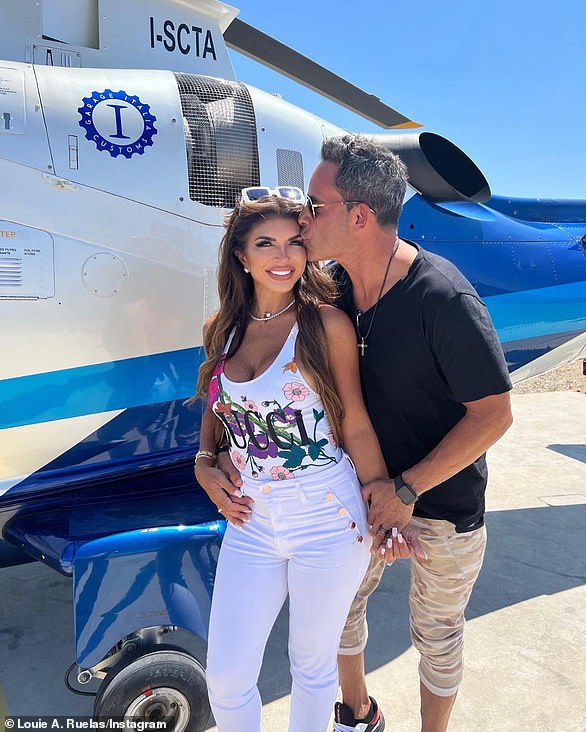 Landing in Greece: The beauty had on a white Gucci tank top and jeans in this post

And they took their speedboat to nearby Sorrento, which is known for its impressive resorts and beaches. Giudice wore a cute pink and green mini dress that was also strapless. She added large gold hoop earrings and had on pretty pink makeup.

Over a week ago DailyMail.com was there to witness the queen of reality TV – appropriately wearing a crown and dripping with jewelry – as she nervously held a piece of card from which she read the vows she had written herself.

Giudice and Ruelas, tied the knot two weeks ago at the Park Chateau Estate & Gardens in East Brunswick, New Jersey in front of 220 guests. Pink for wine time: And she had on this plunging blush dress in satin for a cocktail Bikini days: She wore a yellow and white two piece while in Capri in Italy 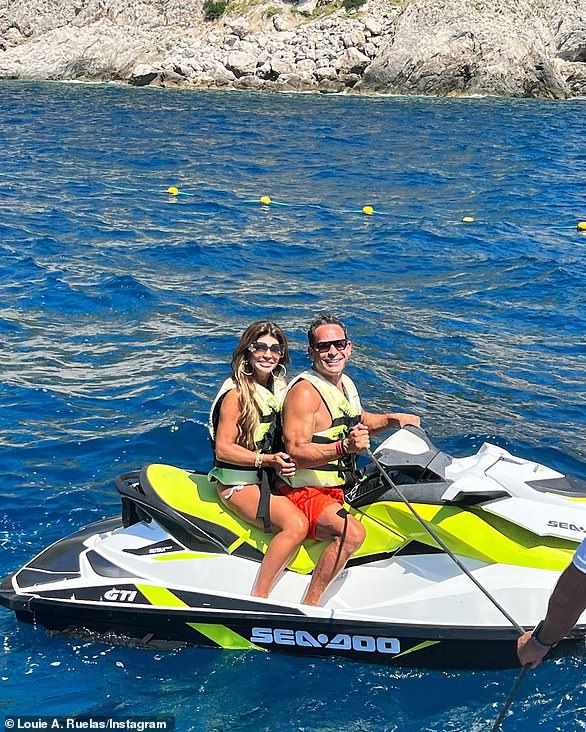 Time to jet ski: And she wore her hoops for a day on the water too 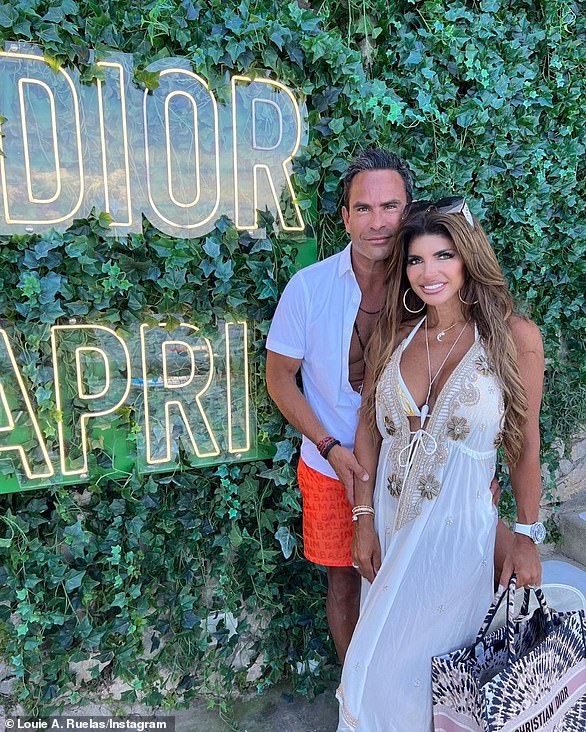 When in Capri: And while on the island she looked chic in a white sheer dress

Ruelas’ two sons, David and Nicholas, also stood by their father’s side.

DailyMail.com was the first to break the news that the New Jersey lovebirds would be celebrating their first week as man and wife in Greece. 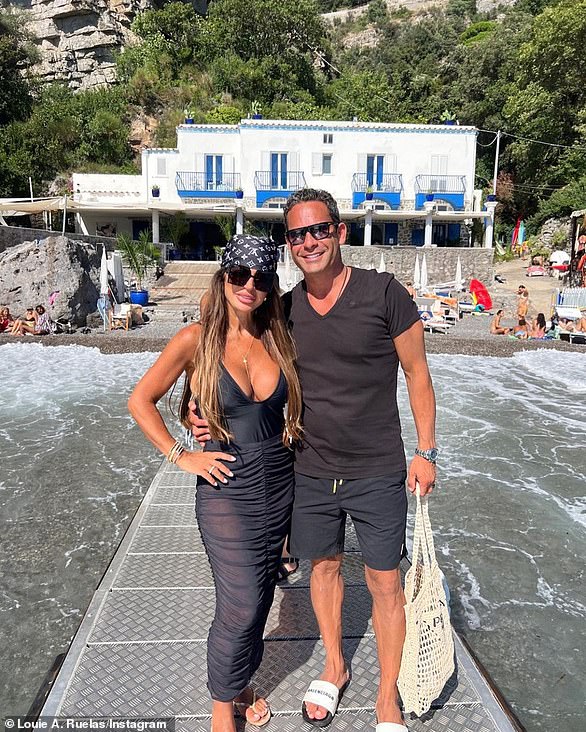 Back in black: Teresa brought some NYC glam to the shores in this black dress 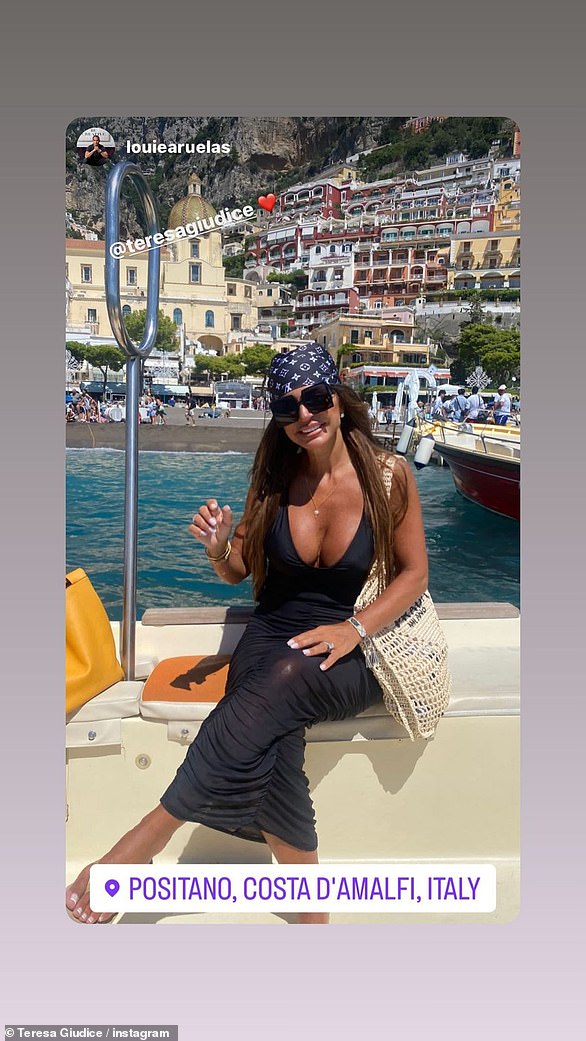 When in Positano: She had on a black and white Louis Vuitton scarf on her head 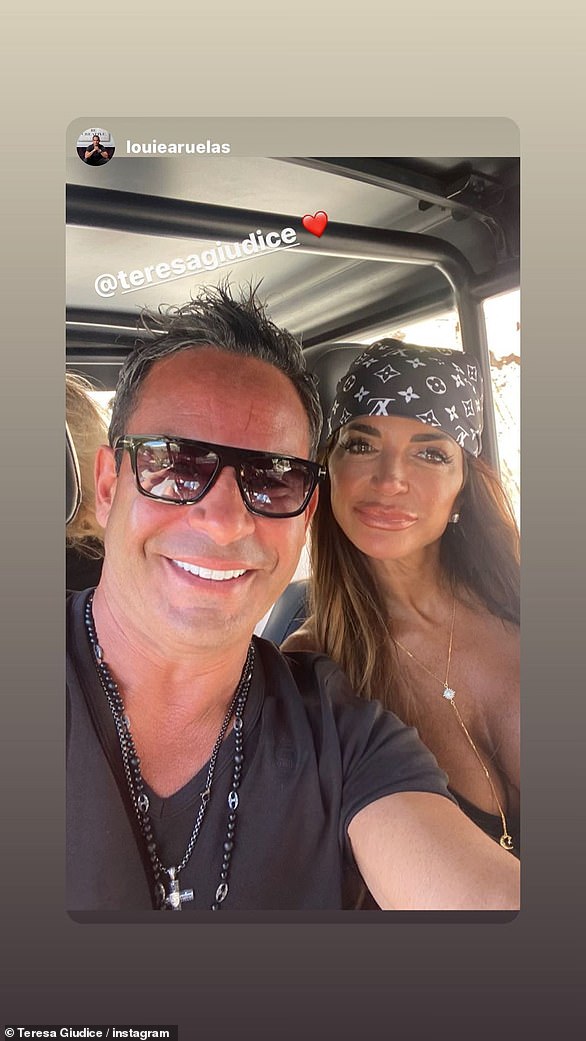 He likes to match his lady love: he wore a black T-shirt with sunglasses

A source informed DailyMail.com that the lovebirds are honeymooning in Greece because the country holds special meaning to them.

‘It’s a very special place for them, and they’re looking forward to celebrating their love for one another after the big bash,’ the source explained.

The destination is where the TV personality accepted her man’s proposal under a firework-lit night sky after a year of dating as a single violinist played nearby.

‘You are amazing in so many ways one thing I admire about you is what a great Dad you are. I am so lucky to have found you thank you for coming into my life,’ she continued.