An hour’s drive north, past the painted storefronts of Norfolk’s boutique towns, lie the undulating wheat fields of Lincolnshire.

The county, butted by the North Sea, has long been overshadowed by its cooler neighbour. While it may not have as much allure as Wells-next-the-Sea or the regal attraction of Holkham, this quiet corner of England has its own fair share of charm.

In the north-east of the county, the Wolds have been designated an Area of Natural Beauty and remain just as the 19th Century landscape painter Peter de Wint captured them. Famous not just because of the extraordinary wide expanse of idyllic countryside – a popular haunt for well-informed ramblers – but also because this is the birthplace of Alfred, Lord Tennyson.

‘Silent woody places’: The Lincolnshire Wolds that inspired Tennyson, who was born in the county of Lincolnshire

The ‘whispering leaves, the gushing stream’ and the ‘silent woody places’ of Lincolnshire are the vistas woven into much of Tennyson’s poetry. Visitors can experience these by walking in his footsteps on a Tennyson Trail, from the hamlet of Bag Enderby and passing through Somersby, where he was born.

To the south, the Edwardian town of Woodhall Spa has the charisma of more established holiday havens of Dorset and Cornwall. As well as the eccentric ‘Britain’s smallest shoe shop’ (it really is very tiny), the thriving high street has a fine selection of independent shops and bijou restaurants.

Check out the Book Fayre for an interesting edit of new and antique books, Molly & Me for French influenced homeware buys and the village Deli for just-baked bread and local produce.

Behind the high street, the Tea House In The Woods is a delightful throwback to the past. 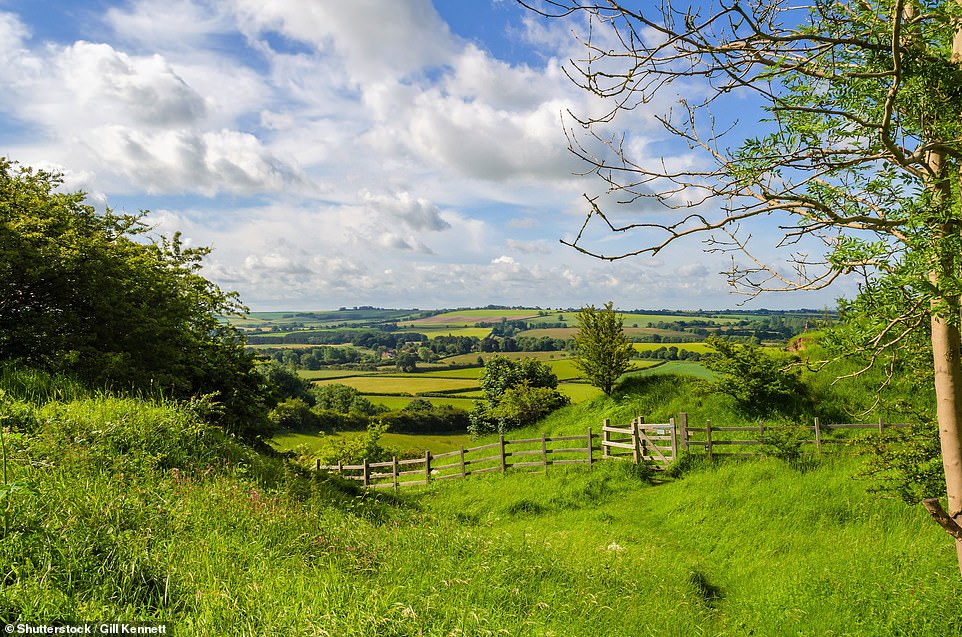 The Wolds in Lincolnshire, pictured, are a designated Area of Outstanding Natural Beauty, an extraordinary wide expanse of idyllic countryside

It dates back to 1913 and offers traditional afternoon tea, as well as lunch and dinner, in a pretty, rustic setting.

Nearby, the Kinema In The Woods, which opened in 1922, is another gem for those after a touch of retro entertainment. It is the only fully functioning cinema in the UK to still use back projection and one of the few to have a resident organist to play during ‘intervals’.

Shaking things up in the area is the nearby Bainland Lodge Park, a resort offering luxury lodges, safari-style tents, family-friendly homes and romantic cabins, all set within 45 acres of parkland. For the perfect retreat a deux, book one of the lakeside wooden shepherd’s huts.

Inside there’s a snug bedroom and a cosy living space with woodburner and hip, industrial lighting. Spend evenings lounging on the deck or steaming in the hot tub, watching the fireflies light up over the water.

Recently opened, the English Country Villa and the English Garden Villa each sleep up to 24 guests and are just the thing for multi-generational stays. Each has a Mediterranean inside-outside style, based around a U-shaped design, inspired by Roman villas and their courtyards.

The different wings mean you can always find a quiet spot, while the central, open-plan living areas dining spaces and outdoor areas, with hot tubs and firepits, bring everyone together. 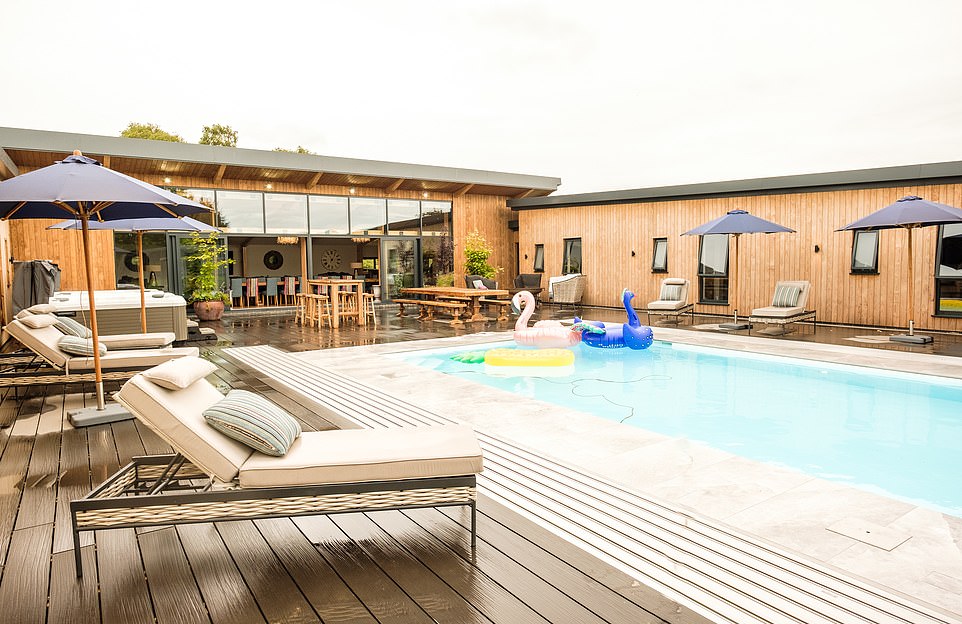 The English Garden Villa at Bainland Lodge Park, which has a heated swimming pool surrounded by potted olive trees and rattan furniture

A highlight is the fact that each villa has a heated swimming pool surrounded by potted olive trees and rattan furniture.

Having inherited the former caravan park from his father, owner Simon Craddock has been reinventing the offering at Bainland over the past ten years and he now has plans to open a farm shop, bike store and an interiors emporium, from which you can order any of the accessories or furniture you like from your home-from-home. It’s due to open by next summer.

‘Space and privacy are key for our guests and we focus on that. This is a place for mental, as well as physical, relaxation, albeit you will also find super-fast broadband, hot tubs and a prosecco van!

‘In the future, I like the idea of offering mindful spa experiences, but for now guests can get that from all the gorgeous nature we are immersed in.’

It’s true that once you’ve checked in, you can immediately switch off here – most of the accommodation looks out across a series of scenic lakes, and the area is trimmed with wild flowers and alive with bees and blue dragonflies. 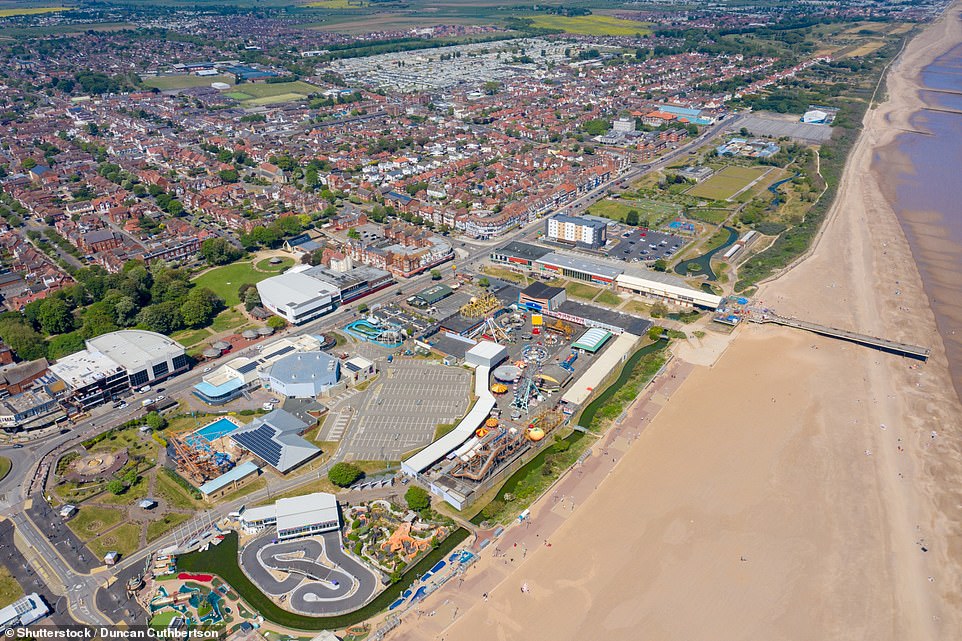 A 30-minute drive along the coast from Bainland Lodge Park is the seaside town of Skegness, pictured, with its fairground rides and slot machines 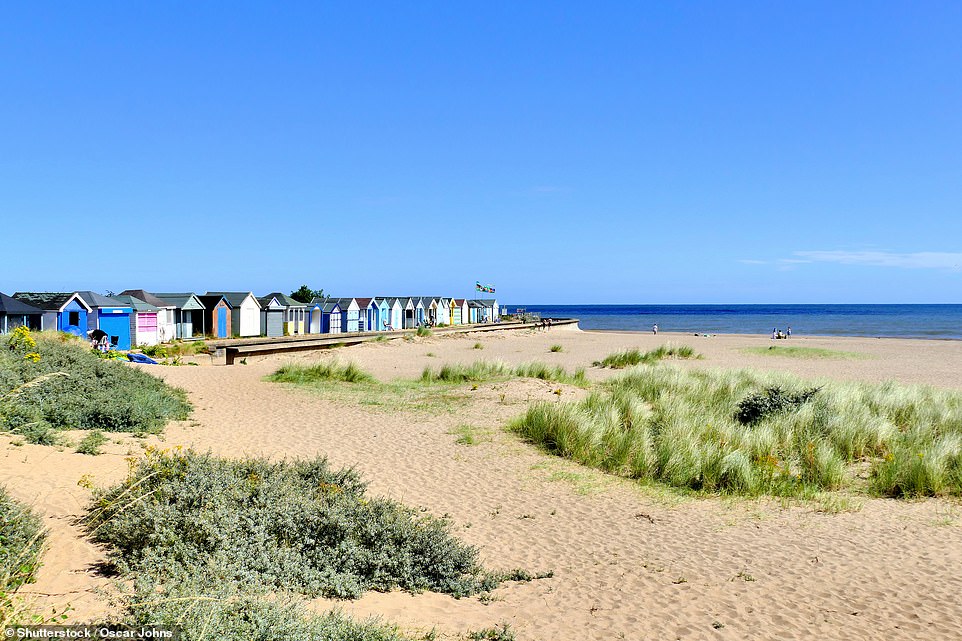 The beautiful beach at Chapel Point in Lincolnshire. Nearby is the new North Sea Observatory – the UK’s only purpose-built marine observatory

The English Country Villa and English Garden Villa start from £4,299 for up to 24 guests for a minimum three-night stay (bainland.co.uk).

By next year, Simon hopes the lakes will be ready to allow for wild swimming. In the meantime, garden designer Jody Ligerd is working on the continued rewilding of the park, adding more trees, encouraging the growth of indigenous plants and creating further water features.

Leave the serenity behind and in a 30-minute drive along the coast you’ll come to the seaside town of Skegness, with its fairground rides and slot machines.

It’s also worth looking beyond the traditional attractions and head to Huttoft Beach. Shielded by dunes and billowing grasses, this is a favourite with locals and firmly off the tourist trail.

Anderby Creek Beach is another little-known coastal spot. From here you can take a 40-minute walk to the new North Sea Observatory, at Chapel Point.

The UK’s only purpose-built marine observatory, you can learn more about the region’s natural history as well as grab a bite to eat in the Seascape cafe.

For birdwatching, Frampton Marsh Nature Reserve is the place to spot migrating flocks of whooper swan and pink-footed geese.

The quaint market town of Alford is also picturesque, with its working windmill, manor house and 14th Century church. 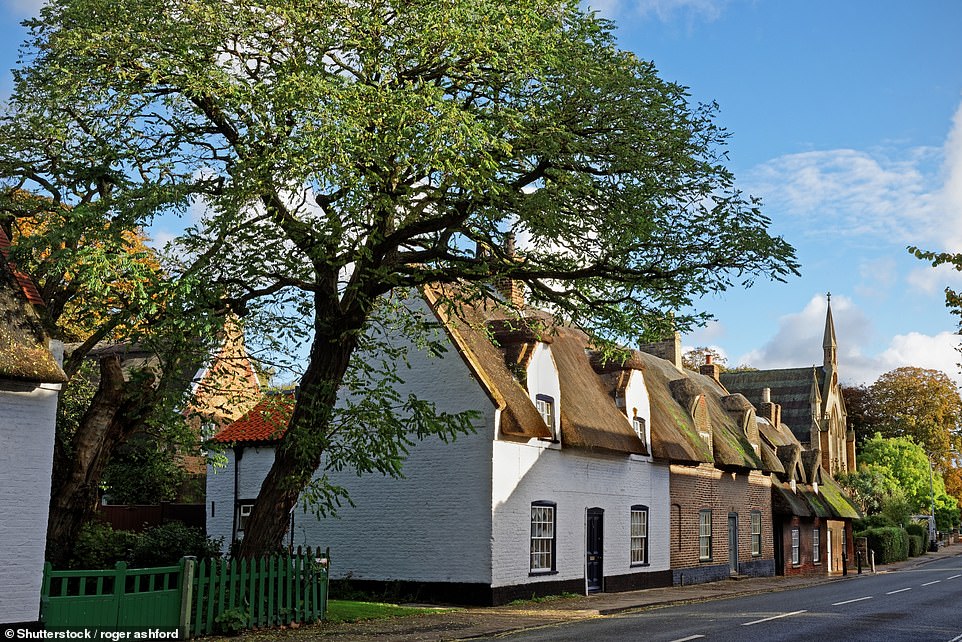 The quaint picturesque market town of Alford, which boasts a manor house and a 14th Century church 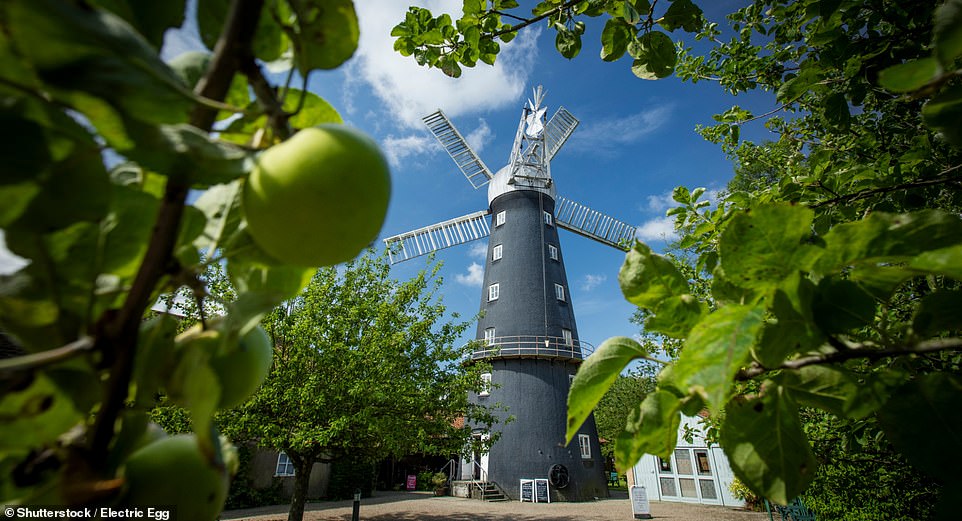 Alford boasts a working windmill with five sails. It is open as a tourist attraction

‘Lincolnshire is all about the big, open skies, the simple life and the fact that little has changed here,’ says Simon. ‘People don’t tend to move away, so it’s very family oriented and friendly.

‘It still has that magical, undiscovered quality that many other holiday destinations have lost.’

He’s right, and you can’t help but wonder how long it will stay like that.