The state government is recommending hospitals and health care providers to reserve their supply of the effective Covid treatment for unvaccinated people, and to deny it to the vaccinated, reported The Tennessean.

The move comes after the federal government began limiting shipments of the treatments to each state after a few southern states with low vaccination rates began to drain the national supply.

Denying the drug to vaccinated people and prioritizing the more vulnerable unvaccinated population is recommended by the National Institutes of Health (NIH) as access to treatment becomes more scarce.

Tennessee hospitals are being instructed to deny vaccinated Covid patients monoclonal antibody treatments, and to instead reserve resources for the unvaccinated. Pictured: Doctors remove gear after checking on a Covid patient in Memphis, Tennessee, May 2020 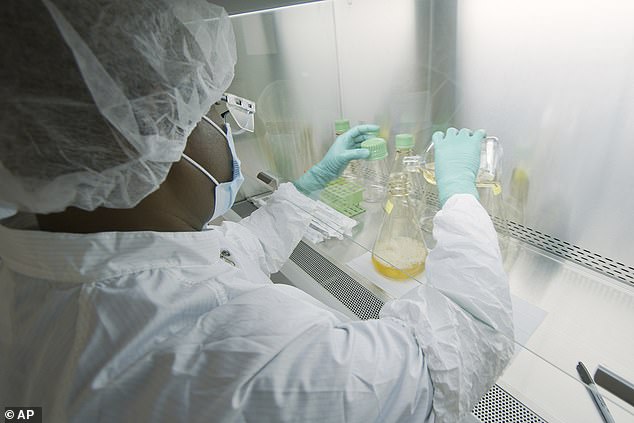 Monoclonal antibody treatments are the most effective against Covid. They provide the body with additional antibodies to fight the virus. Pictured: An Eli Lilly researcher tests Covid antibodies in an Indianapolis, Indiana, lab, May 2020

‘But the doctor in me thinks about all these “what ifs?” What if there is a super-high-risk older person but they are not technically considered immunocompromised? Do they not get it? But a 22-year-old unvaccinated person with asthma – they get it?’

According to NIH recommendations, a unvaccinated or ‘incompletely vaccinated’ person, and those who are fully vaccinated but immunocompromised, should be prioritized for the treatment if there are logistical constraints or shortages.

‘Our recommendation to monoclonal antibody providers or individual facilities across the state is if they need to prioritize distribution of the treatment, the NIH guidelines are the recommended approach for that prioritization, including prioritizing those who are most likely to be hospitalized,’ the health commissioner’s office told DailyMail.com.

‘Ultimately, this comes down to providers’ clinical judgment to ensure those most at risk are receiving this treatment.’

Some physicians agree that prioritizing the unvaccinated, who are significantly more likely to be hospitalized or die from the virus, is the right decision despite the potential negative optics.

‘If we had enough to give this to every single person at risk of hospitalization, that would be ideal,’ Dr Karen Bloch, medical director of the antibody infusion clinic at Vanderbilt University in Nashville, told The Tennessean.

‘But with this limited resource, identifying those at most risk makes sense. Taking out the politics, the unvaccinated fit into that category.’

The federal government began to ration the distribution of monoclonal antibodies earlier this month.

Officials from the Department of Health and Human Services (HHS) said that seven southern states along the Gulf Coast had been utilizing 70 percent of the nation’s supply, and they feared a shortage in case other parts of the nation needed resources.

Some states have been prioritizing the distribution of monoclonal antibodies over that of the Covid vaccines.

Many conservatives around the nation, even those who are skeptical of the Covid vaccines, are touting the treatment despite the fact that it is also relatively new – only being developed last year.

The drug is known as one of the most effective treatments against the virus, and works by providing a person lab-made antibodies that fight the virus, similar to those that someone who receives a vaccine will naturally generate.

Distribution of the drug is intensive and costly, however.

Tennessee is on the tail end of the state’s summer COVID-19 surge, with new daily cases cutting in half from 8,000 a day to around 4,000 a day over the last month

The Volunteer State’s COVID-19 vaccine roll out reached its highest point in early April, with more than70,000 people getting jabbed every day. After reaching a low below 10,000 a day in early July, around 16,000 people are getting the shots every day in late September

A person receiving monoclonal antibodies takes up a hospital bed for at least 90 minutes, requires the attention of medical staff – which is limited amid a massive nationwide Covid surge – and costs more than 100 times what it costs to give someone the vaccine.

Many southern states are leaning into monoclonal antibodies as the primary way to fight the pandemic, though.

Republican lawmakers from the state, including Sen Marco Rubio and Sen Rick Scott are calling for the HHS to reverse the decision and allow Florida to continue ordering an unlimited amount of the drug.

And in Alabama, health officials – who confirmed the state was one of the sevens states = have also expanded monoclonal antibody treatment sites as only 41 percent of the state is fully vaccinated.

In Tennessee, only 44 percent of residents are fully vaccinated, and the rollout of the shots has caused some political turmoil.

In June, state republicans attempted to dissolve the entire Tennessee Department of Health, claiming that pictures on the department website showing a teen with a band-aid on their shoulder was proof that the agency was attempting to vaccinate children without their parents knowledge and undermine parental consent.

In July, that state’s top vaccine official was pushed into resignation after she distributed a memo alerting some vaccine providers that they could give minors the shot without their parents permission. 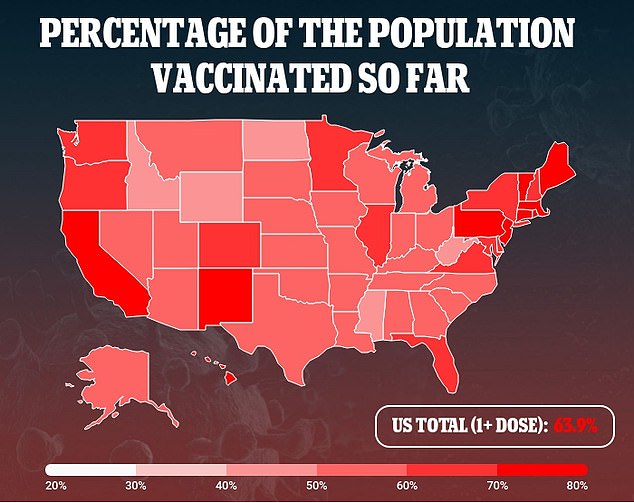 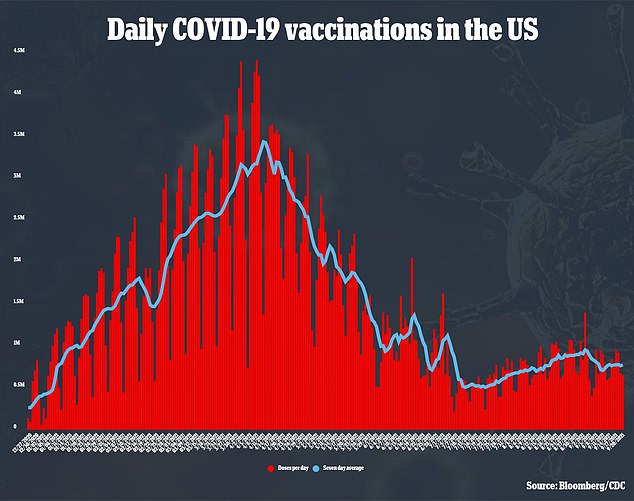 Days later, the state halted all vaccine outreach to minors of any kind – including vaccines that are not for Covid – and stopped using sites like schools as vaccine clinics.

The state’s vaccine roll out reached its highest point in early April, when around 70,000 people were getting jabbed every day.

It hit a low in July, when under 10,000 people were getting the shots daily.

Currently, around 16,000 people are receiving the shots in the state every day.

The state appears to be on the backside of a summer COVID-19 surge, recording less than 4,000 cases every day, less than half of the over 8,000 a day in late August.

The state does not report COVID-19 numbers daily, however.