Minnesota and Tennessee have now both reported cases of unexplained hepatitis, with one registering a liver transplant — as global death toll rose to at least four including a fatality in America.

Minnesota has spotted two cases, doctors said, including a baby who needed a liver transplant and a second patient still in hospital awaiting a transplant. Tennessee doctors also say they have spotted at least two cases.

It takes the U.S. total to at least 31 cases across 11 states, with five children having received liver transplants and one death confirmed in Wisconsin.

Indonesia is now probing three deaths from a mysterious hepatitis which, if confirmed, would bring the global total to at least four. It would also be the second country in the world to report fatalities from the disease.

Tests are underway to confirm the cause of death, although Indonesia has not officially logged any cases of hepatitis since the outbreak began.

It is not clear what is causing the spate of illnesses, although experts have linked it to adenovirus — which normally triggers the common cold — and even suggested lockdowns could be responsible.

More than 200 child hepatitis cases of unknown origin have been confirmed worldwide in the mystery outbreak – which experts say is just the ‘tip of the iceberg’. Most are in the UK and U.S., which have a stronger surveillance system.

The above map shows the states that have reported confirmed or suspected cases of hepatitis. Over the weekend Tennessee and Minnesota were added to the list. Minnesota still has a patient in hospital who is awaiting a liver transplant 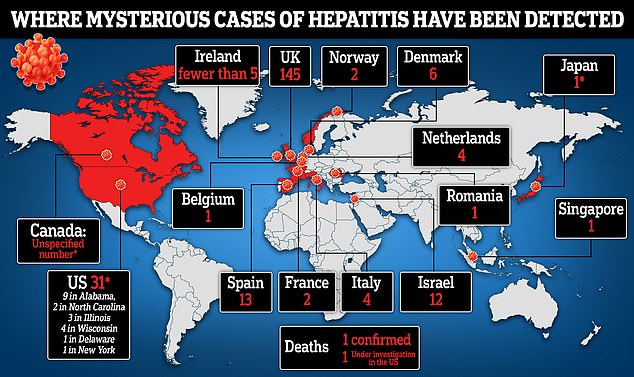 More than 200 children have been sickened by the condition across the world in up to 14 countries since last October *cases in Canada, Japan and Wisconsin, Illinois and New York are still yet to be confirmed 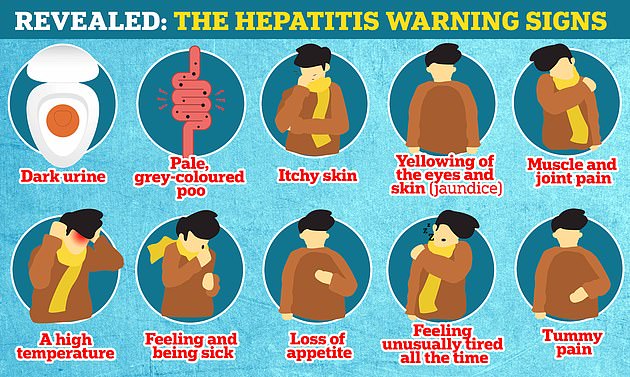 Last week the U.S. became the first country in the world to declare a fatality from the disease in a child in Wisconsin.

The World Health Organization has confirmed one death, although they did not reveal the location. Indonesia is looking into three deaths.

At least 18 youngsters have required liver transplants so far.

Cases are of an ‘unknown origin’ and are also severe, according to the World Health Organization. It has caused at least one death and 18 liver transplants.

How widespread are cases?

The inflammatory liver condition has been spotted in more than 200 children aged between one month and 16 years old.

*cases in Canada, Japan, and Illinois, Wisconsin and New York are still yet to be confirmed

None of the cases have been caused by any of the five typical strains of the virus — hepatitis A, B, C, D and E — leaving experts baffled by the outbreak.

Some children have tested positive for adenovirus, which usually causes cold, while other have been infected with Covid — but no clear theme has emerged.

The UKHSA ruled out the Covid vaccine as a possible cause, with none of the British cases so far having been vaccinated because of their age.

Hepatitis often has no noticeable symptoms — but they can include dark urine, pale grey-coloured faeces, itchy skin and the yellowing of the eyes and skin.

Infected people can also suffer muscle and joint pain, a high temperature, feeling and being sick and being unusually tired all of the time.

Treatment depends on severity, with some patients able to fight off the illness on their own.

In more dangerous cases where the liver fails, children can be put into induced comas to deal with brain swelling caused by ammonia build-up.

A liver transplant may be necessary if the liver has become damaged to self-repair, although this is incredibly rare.

Doctors in Minnesota and Tennessee have not revealed the ages of their patients.

But in Minnesota one child is still in hospital, pediatric gastroenterologist at M Health Fairview hospital Dr Heli Bhatt said.

She told KSTP.com: ‘I pray for that kid to turn around, which they might, but some of those indicators do say that it is severe and so we have evaluated this patient for transplant.’

Doctors at the hospital also revealed they had another patient with unexplained hepatitis who needed a liver transplant.

The Minnesota Department of Health told DailyMail.com it was now following up on ‘several cases’ of the illness.

In Tennessee, Dr Saeed Mohammad, also a pediatric gastroenterologist at Monroe Carell Jr. Children’s Hospital, told Fox17 at least two cases had been recorded in the state so far.

They have both tested positive for adenovirus, which can trigger the common cold.

The state’s Department of Health said it is not collecting information on the hepatitis outbreak.

U.S. health chiefs believe the adenovirus may be behind the sudden spate of hepatitis cases.

But some experts suggest the illness could also be triggered by weakened immunity among children due to lockdowns.

They are also looking into whether a new Covid variant or previous Covid infection could be behind the uptick in cases.

None of the U.S. patients have tested positive for the hepatitis viruses.

Indonesia’s Ministry of Health on Monday urged parents to be on the look out for symptoms of the illness, which include jaundice — yellowing of the skin and whites of eyes — as well as abdominal pain, vomiting, diarrhea and dark-colored urine.

It has instructed people to seek medical advice if their child developed symptoms and encouraged its population to maintain good hand hygiene, ensure food is clean and cooked well and avoid contact with unwell people.

Officials are investigating the cause and looking into the epidemiology of the outbreak, the ministry said.

U.S. health chiefs believe adenovirus may be behind the sudden onset hepatitis cases.

It found this week that none of the nine children in Alabama, where the outbreak began, had tested positive for Covid.

Scientists have previously suggested cases could be just the ‘tip of the iceberg’, with more likely to be out there than have been spotted so far.

Professor Alastair Sutcliffe, a leading paediatrician at University College London, told MailOnline that health chiefs may not know the cause until later this summer.

He said: ‘With modern methods, informatics, advanced computing, real time PCR and whole genome screening, I would think finding the cause with some reasonable reliability will take three months.’

Professor Sutcliffe said discovering the cause could be slowed by red tape across international boundaries, with difficulties in transporting biomaterials across countries.

Parental consent, data protection and laws regulating the use of human tissue in the UK could all act to slow research, he said.

Searching for an unknown cause is especially hard because cases may have multiple factors behind them that are not consistent across all illnesses.

UK health officials have ruled out the Covid vaccine as a possible cause, with none of the ill British children having been vaccinated because of their young age.

Liver experts described the spate of cases as ‘concerning’ but said parents should not worry about the illness affecting their children.

European Centre for Disease Prevention and Control (ECDC) official said the disease was ‘quite rare’ but judged the risk to children as ‘high’ because of the potential impact.

The risk for European children cannot be accurately assessed as the evidence for transmission between humans was unclear and cases in the European Union were ‘sporadic with an unclear trend’, it said.

But given the unknown causes of the disease and the potential severity of the illness caused, the ECDC said the outbreak ‘constitutes a public health event of concern’.

The surge in hepatitis cases was first recorded in Scotland on March 31, with one child in January being hospitalised with the condition. The Scottish case was dated back to January.