A man who suffered horrific burns in a gas explosion has said justice has not been served – after a building firm boss was cleared of breaching health and safety laws.

Kyle Roe, then 19, was almost killed in the blast and still lives with daily pain – both physical and mental.

He had just returned to his newly-refurbished flat in Chippenham, Wiltshire, from his job at a supermarket when the explosion took place in 2017.

Unbeknown to him the flat had filled with gas and when he turned a light on it exploded.

Roderick Standing, 63, had been charged with health and safety breaches while the flat was being converted in 2014.

He was alleged to have failed in his duty as an employer to conduct refurbishment work – in a way that did not expose others to health and safety risks.

But magistrates said they could not be sure to ‘the criminal standard’ if builders from his firm had carried out work on the heating system and cleared him earlier this week. 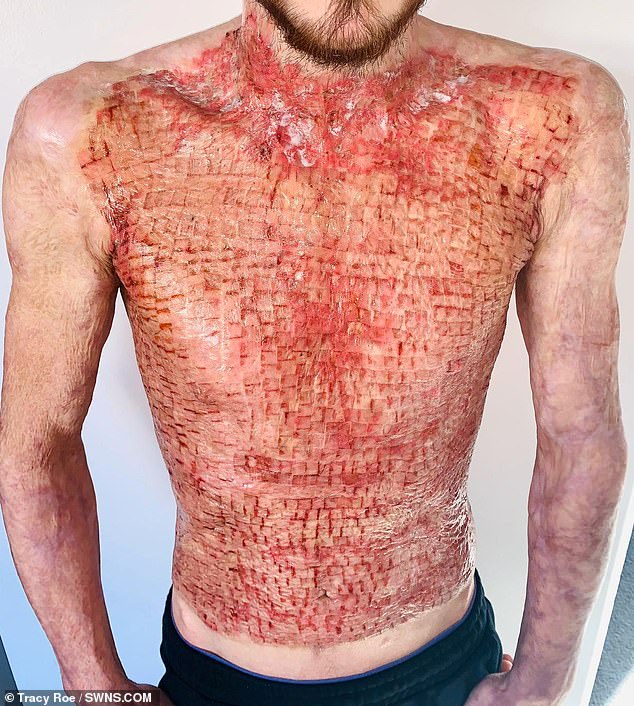 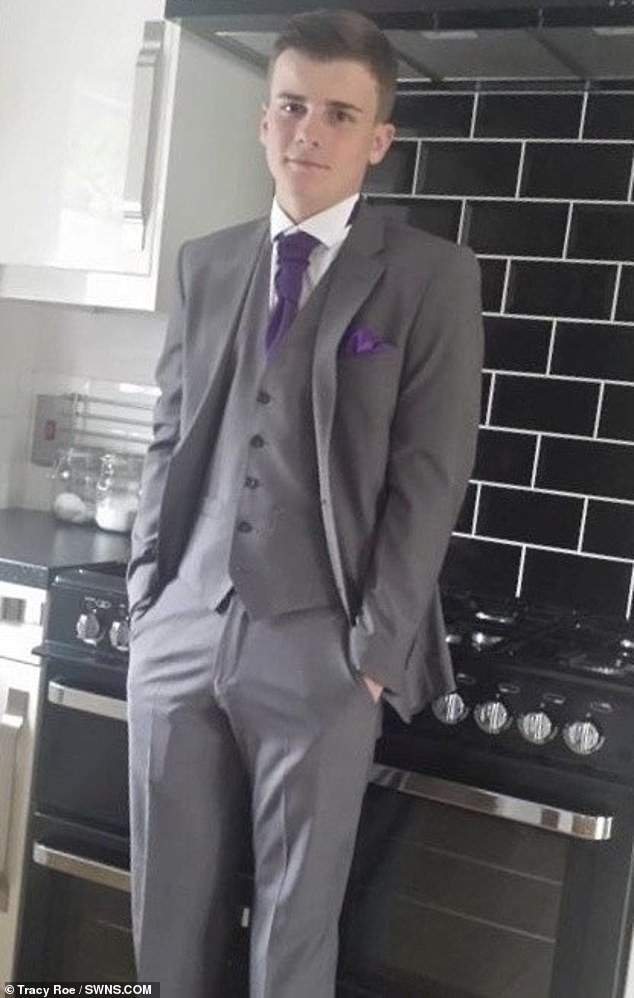 Kyle Roe, pictured before the explosion, has hit out a court’s ruling that the company who worked on his flat in 2014 is not guilty of health and safety breaches after his flat exploded when he turned on a light switch in 2017 because of a build up of natural gas inside 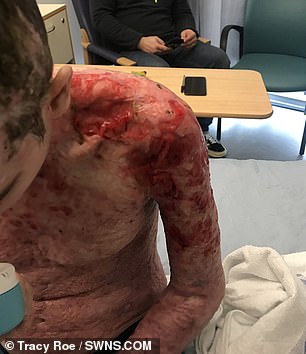 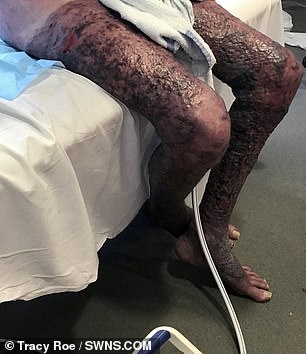 Health and safety officials said the explosion was caused by an uncapped gas pipe behind the wall of another flat.

Kyle suffered 87 per cent burns and was placed in an induced coma after being rushed to a specialist unit at a hospital in Swansea, Wales.

Shocking pictures show the extent of Kyle’s injuries at various stages of his rehabilitation, covered in plaster and in a wheelchair.

Qualified surveyor Mr Standing’s former company had been hired to convert the upper storeys of the building into flats.

Gutted Kyle, now 22, has hit out at the verdict – stating that he just wants someone to be held responsible.

He said: ‘I am utterly devastated. I have suffered injuries that should have killed me and was only given a per cent chance of survival. I lived but there are days when I wish I had not.

‘I have to fight every day with the pain and the trauma of what I endured on October 18, 2017. How is this fair?

‘All I ever wanted was for justice and for someone to be held responsible for what happened to me.

‘The true Kyle Roe died in that explosion and what is left is only a part of me – I can’t be who I was or do the things I want to do. There are days I wish I had died.’ 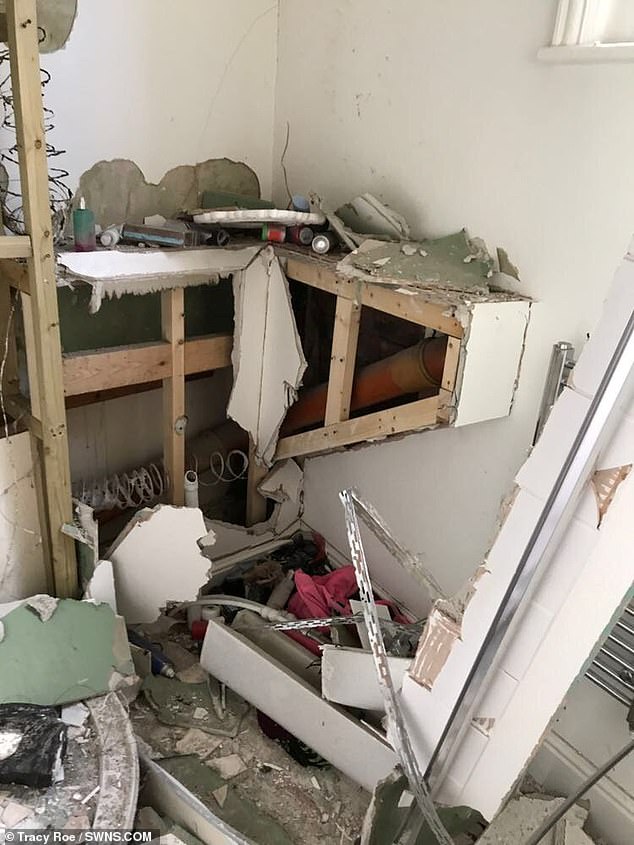 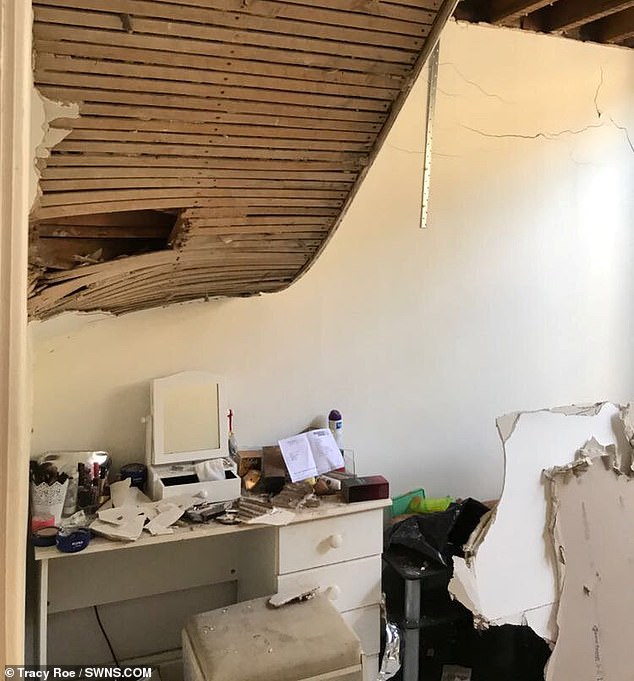 The explosion was caused by an unsealed gas pipe which had been left after works were carried out to convert the building into flats in 2014, a court heard, but a company that worked on the project was found not guilty of health and safety breaches at Salisbury magistrates

Kyle had just returned home from a shift at Morrisons when he flipped the light of his flat on – sparking the explosion.

He was rushed to Southmead Hospital in Bristol but, such was the severity of his injuries, a decision was made to transfer him to a facility across the river Severn.

He remained in a coma until the middle of December 2017 and was not discharged from the ICU until January 26, 2018.

Remarkably he pulled through – but has since had to endure countless treatments and operations. 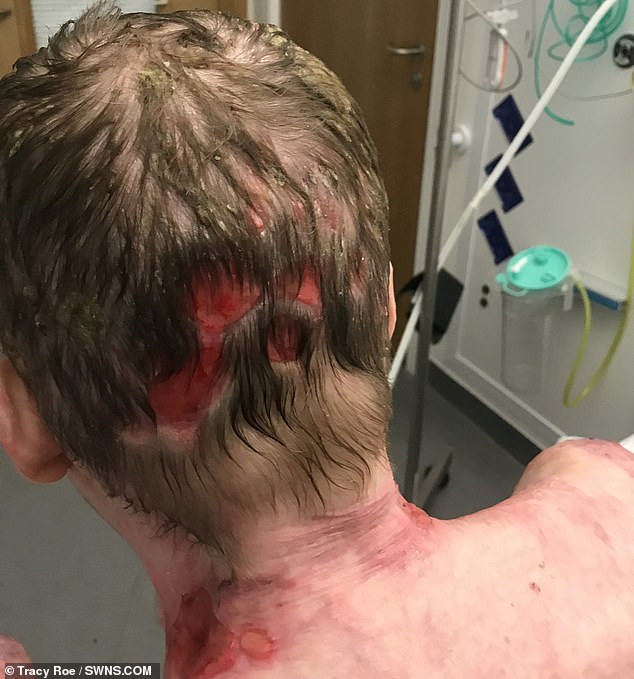 Photos show the horrific injuries Kyle, who was 19 at the time, suffered during the explosion 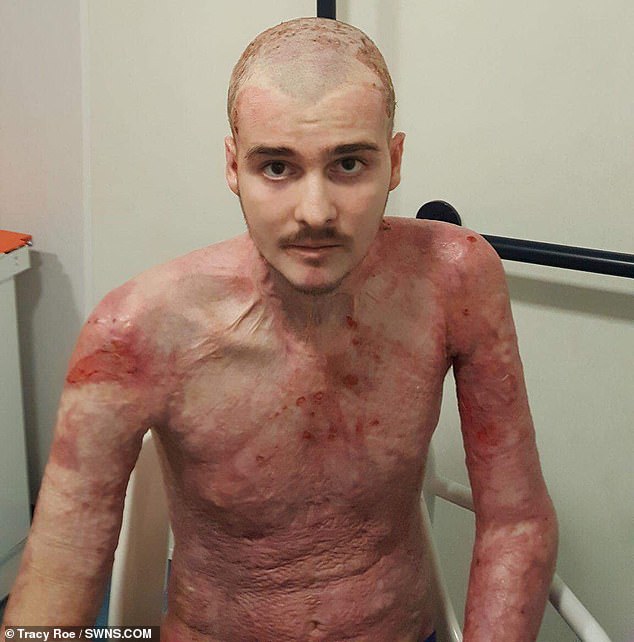 His family have supported him all the way – and agree that the court case didn’t end the way they wanted.

His mother Tracy, 48, said: ‘This explosion has changed Kyle’s life and ultimately inflicted the most severe injuries which he has for the rest of his life.

‘In addition, the rollercoaster and aftermath of this incident has impacted our entire family and our closest of friends.

‘We have to endure this everyday and see our Kyle in pain.

‘The criminal case had to prove guilty without a doubt to impose the correct sentence and as we heard, sadly, the judge felt the doubt lies with whoever cut the gas. 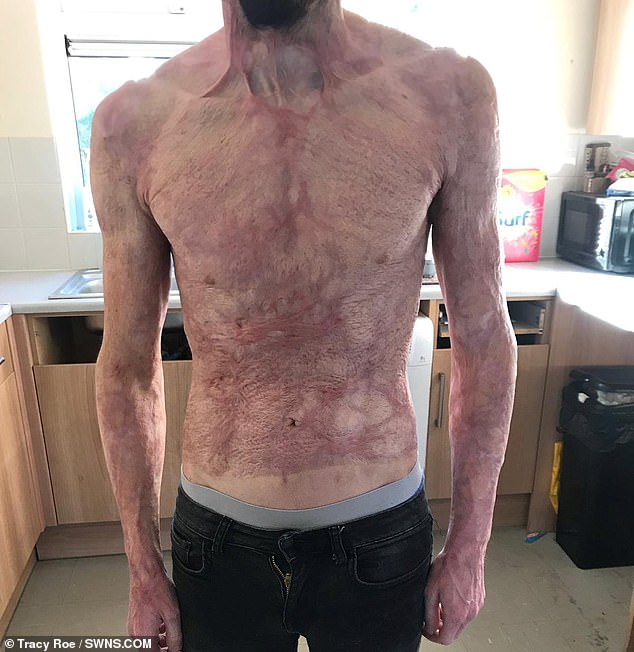 ‘Even though the judge ruled there was doubt does not mean each of these individuals are not accountable.

‘Our son did nothing wrong and for him, there has been no justice.

‘Those responsible have to live with the fact that – as a result of the negligence during that renovation – a young, 19-year-old man, son, brother, fiancé and father with his whole life ahead of him now has to face ongoing pain and agony as a result of his injuries.

‘Justice has not been served.’

The HSE also brought a prosecution against real estate firm Prestige EA Ltd for breaches regarding asbestos in the building.

The company, now liquidated, admitted the charge and was fined £2,000 and ordered to pay £3,120 in court costs for failing to obtain the relevant survey.

Kyle has also filed a multi-million pound lawsuit against the landlord of his former building for damages in the High Court. His family say this case is ‘ongoing’.

Standing was charged with an offence under sections three and 33 of the Health and Safety at Work Act, namely being an employer failed to conduct an undertaking in a way that persons not in his employment who may have been affected thereby were not exposed to risks to their health and safety.