Making money from your investments this year is going to be a challenge. Certainly, the portents are not good. Persistent inflation, recession and continued geopolitical tensions, could all weigh heavily on stock markets as corporate earnings are squeezed.

Yet it’s often when things look at their bleakest that stock markets pleasantly surprise. Unlike us mere mortals, they have a canny knack of looking beyond the summit of the next hill – they see tides turning before anyone else. The economic news may well be wretched, but that doesn’t mean the markets will perform dreadfully too.

Of course, investing in equities is a long-term journey that truly only enriches if investors see it as part of their life’s journey. It’s why I have always urged investors to cut out the white noise, eschew greed and invest small amounts on a regular basis. Drip, drip rather than gung-ho. Boring over speculative.

New Year bargains? Investors could make some impressive returns this year if they are prepared to be brave and pick some seriously undervalued assets, says Jeff Prestridge

But I have a savvy feeling that shrewd investors could make some impressive returns this year if they are prepared to be brave and pick some seriously undervalued assets. Probably, the strategy will take longer than a year to reap its full rewards, but that’s fine.

My starting point is the investment trust universe. Investment trusts are stock market-listed investment vehicles that anyone can buy through an online platform – think AJ Bell, Hargreaves Lansdown and Interactive Investor.

Trusts issue a fixed number of shares that investors can buy in the open market. These shares tend to rise and fall according to the value of the underlying assets – typically, stakes in listed companies.

Like any other listed UK company, an investment trust will always have a share price for buyers and sellers. This means investors are rarely prevented from getting their money out in an emergency.

But more excitingly, the share price of an investment trust does not always truly reflect the value of the assets that lie under its bonnet.

This means that investors can occasionally buy trust shares at a seriously discounted price. Now is such a time. They’re dirt cheap.

A disconnect between the share price and the value of a trust’s assets can occur for a number of reasons. A trust might be investing in a sector or a market that is very much out of favour. Or the investment managers might be making a pig’s ear of things, disappointing investors in the process.

All these reasons can fuel a situation where there is a dearth of buyers and an overflow of sellers.

The normal economics of supply and demand apply, meaning that the share price falls, causing it to stand at a discount to the value of the underlying assets. In other words, it doesn’t reflect the true worth of the trust’s assets.

In recent months, as the economic backdrop has become more challenging, discounts – double-digit discounts – have emerged on a number of trust sectors and individual trusts.

They include commercial property, always the first asset class to come under pressure when economic conditions turn for the worse as commercial buildings lose tenants and find new ones harder to find.

They also include some private equity trusts as a result of the fact that analysts start to question the value put on the assets held – most of which are unlisted. 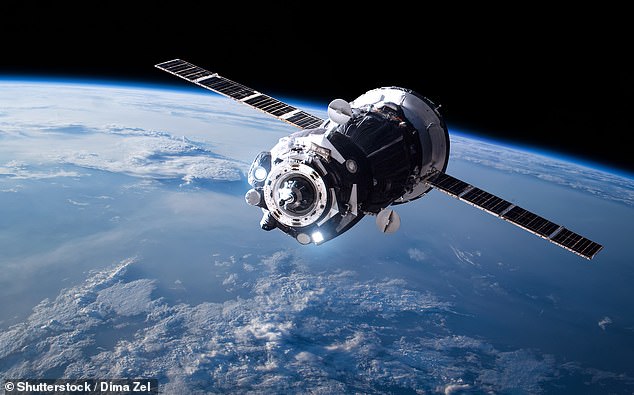 Discounts have also appeared on smaller companies trusts and some emerging markets funds as investors have fled these sectors in favour of safer homes. This is often referred to as a ‘flight to quality’.

Although a trust standing at a discount represents a bargain, it is only of value to an investor if the trust goes on to deliver stellar investment returns.

The icing on the cake is the eradication of the discount and the resulting delivery of a performance kicker.

All potentially exciting. So how can investors benefit from such double-digit investment trust discounts in the year ahead?

We have put together a portfolio, comprising ten trusts whose shares currently stand at a discount to their asset value of at least 10 per cent (see table below). Trusts all with the potential to deliver exciting returns.

Diversification is the name of the game, so all ten trusts are run by different investment groups, comprising big brands (the likes of Abrdn, Allianz, Franklin Templeton, Invesco and Schroder) and lesser known ones (for example, Aberforth and Herald).

All ten have investment mandates that do not overlap, so they complement rather than replicate – and the trusts each comprise a portfolio of holdings (another source of diversification).

The funds, all with at least £100million of assets under their belt, fall into two camps. There are the growth-orientated trusts with portfolios skewed towards specific sectors such as space technology, the economic powerhouse that is India, small listed companies and unlisted ones.

All four trusts within this growth camp have recorded losses this year ranging from 9.4 per cent (Aberdeen New India) through to 56.6 per cent (Seraphim Space).

In the case of both Augmentum Fintech and Seraphim Space, the chasm between the share price and assets of these trusts is vast (more later).

Complementing these are six trusts, all with an income bent even though some of the areas they invest in – for example, Vietnam, Asia and emerging markets more generally – are not renowned for dividend payments.

The dividend universe is broadening beyond the shores of the UK and US. In this income camp are also trusts with a focus on the UK stock market, whether it is smaller companies (Aberforth Smaller Companies) or mid-cap stocks (Schroder UK Mid Cap).

Brunner, a global trust with 45 per cent of its assets in the United States, makes up the set. Five of the six trusts have lost investors money this year.

Their share price discounts are not as dramatic as those for some of the growth funds, a reflection in part of the comforting income stream they provide shareholders with through thick and thin.

In fact, Brunner has a remarkable record of 50 years of annual dividend increases.

Only six other investment trusts have longer success rates. 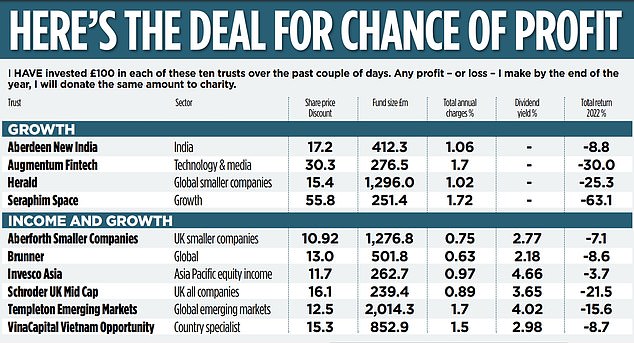 SO WHAT DO THE EXPERTS SAY?

Buying an investment trust that stands at a discount may represent a bargain, but this counts for nothing if the fund does not go on to deliver stellar returns.

All ten trust picks have the potential to generate positive returns over the next 12 months, although, of course, ‘potential’ does not always translate into reality.

The riskiest trusts – as reflected in their huge share price discounts – are Augmentum Fintech and Seraphim Space, both investing in unlisted companies.

Augmentum Fintech invests in private fintech companies and is led by Tim Levene, an entrepreneur who co-founded juice bar Crussh.

Levene says there is a ‘world of difference between investing in listed equities and high growth early start companies – apples and pears’. He is not surprised, therefore, that some of the investment trusts with unquoted portfolios that haven’t succeeded – the most high profile being Woodford Patient Capital – have been run by ‘public stock pickers’.

He adds: ‘As a manager of such a trust, you need a tight portfolio [the trust has stakes in 24 companies] and you must actively engage with the businesses you take a stake in. Absolute involvement is key.’

It means that Levene sits on the board of many of the companies the trust is invested in – the likes of financial services company Zopa, small business mobile bank Tide and mobile money account provider Monese.

Levene is refreshingly honest about the trust’s approach. ‘We’re in the business of taking risks, so the trust is not for widows and orphans. We will occasionally make mistakes, but the hope is that the winners will exceed the losers.’

Its biggest success so far has been investment platform Interactive Investor which was bought by investment house Abrdn last year, generating a tidy profit for the trust.

Levene believes the value of the trust’s assets are ‘robust’ (intimating they are not likely to be written down) and that the portfolio is ‘performing’. The share price, he says, has been impacted by the difficult economic backdrop. 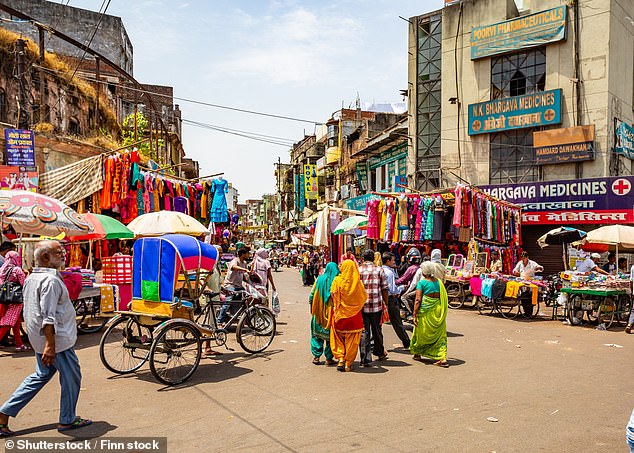 Asset manager GQG Partners, based in the United States, is a big fan of India on the back of the country’s sustainable economic growth

Although the price of the trust’s assets could be adjusted downwards, a research note just published from investment analyst Edison ends on a positive. It says: ‘Investor sentiment towards early-stage companies could remain fragile for some time yet.

‘However, for those investors with the appropriate appetite to risk and investment time horizon, Seraphim Space may be attractive at these levels.’

Although Seraphim may not come good immediately, news that regulatory clearance has been given for Richard Branson’s Virgin Orbit to send the first satellite into space from British Soil is a boost for the space technology sector.

Space analyst Euroconsult believes 18,500 satellites weighing less than 500kg will be launched into low-Earth orbit over the next decade.

Other equity sectors that the portfolio is exposed to have their advocates. Charles Montanaro, founder of Montanaro Asset Management, believes the current bear market in UK smaller companies – some 12 months old – could be ‘over possibly by the end of the first quarter of this year’.

On the UK stock market generally, James de Uphaugh, manager of investment trust Edinburgh, says that if the economic news becomes less bad, ‘then we are in the foothills of a renaissance of UK equities’.

Meanwhile, wealth manager WH Ireland likes Asia as an investment market, reckoning it has ‘some great companies’ while the region’s economies ‘have not been blighted by inflation to nearly the same extent as their Western counterparts’. As sentiment improves, it says ‘Asian assets should be set fair’.

Both the economies of India and Vietnam are in growth mode. Asset manager GQG Partners, based in the United States, is a big fan of India on the back of the country’s sustainable economic growth. (It’s less keen on China).