Four British teenage girls have been kept in solitary confinement in an Italian hotel turned coronavirus detention centre for almost one month.

Rachel Goldsmith, Lily Griffin, LilyRose Wallace, and Millie Acers, who are all 18, had been on holiday in Sicily before they tested positive for the virus in September.

The school friends were placed in separate rooms at the hotel which is surrounded by armed police and the army.

The teens, who were educated at the £18,000-a-year James Allen Girls’ School in Dulwich, south London, are now missing the start of university courses, exams and their jobs.

Rachel Goldsmith, Lily Griffin and LilyRose Wallace, all 18, and Millie Acers, 19, were on holiday in Sicily (pictured) when they tested positive for the virus on September 15

Under Italian health laws they must test negative for the coronavirus twice before they can be freed.

Millie, who is studying English at Durham, was able to leave on Sunday after two negative results, but Rachel, Lily and LilyRose tested positive for the third time this week.

Rachel, who is applying to study history and politics at university next year, said: ‘It’s been really challenging mentally, being completely alone.

‘The only contact that we have are with people wearing hazmat suits and they can’t really speak English, so I feel isolated. It’s just lonely being here.’ 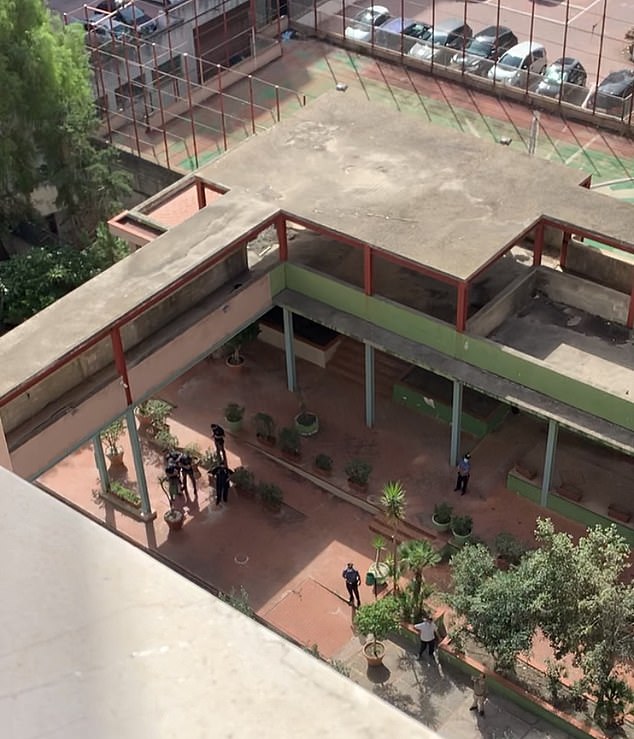 The view from the hotel where the girls are being held, they are not able to communicate with each other from their separate rooms

LilyRose, who is working in a café and hoping to apply to drama school, added: ‘I feel frightened. We’re all struggling now because it’s been a long time. The conditions aren’t great but what’s really bad is the communication – not knowing when we’re going to leave, what’s going on, and when our tests are going to be.

‘The thought of not knowing when I’m coming home is the most difficult, especially at this point knowing that there’s no point us being here. We know we’re no longer contagious, it’s been a very long time since we had the virus.

‘It’s really scary. We’re young but there are lots of adults here and you can hear them crying at night and shouting and you think if adults aren’t coping well, what’ll happen to us if we’re here for a long time?’

The four friends, who are all from south London, arrived in Palermo, the Sicilian capital, on September 8 for a one week holiday after a disrupted final year at school. 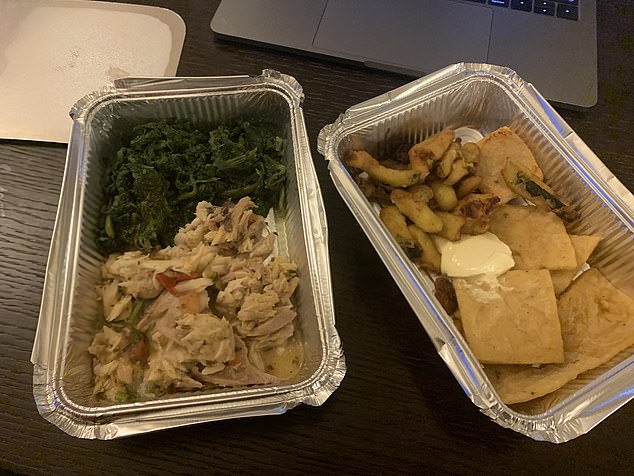 But LilyRose and Rachel started having mild symptoms, including losing their sense of taste and smell. They notified the landlady of the apartment they were staying in and all four began self-isolating.

The group tested positive for Covid-19 on September 15 – the day they were due to fly home – and were taken by ambulance to the San Paolo Palace Hotel.

They are now appealing to the British government for help, amid fears they could be stuck there for several more weeks.

Lily, who is studying medicine at Imperial, said: ‘We feel let down by the British government because we did everything we could to protect Italians – we got tested, we didn’t get on that plane home, we wore masks everywhere and now the government and the consulate are doing nothing to get us out of this situation.

‘I’ve now missed the start of university. For this first week I can catch up on everything online but next week I start missing skills session, it’s a medical course so you can’t do it all remotely.

‘I can’t study on the WIFI of the hotel either because it just doesn’t reach my room so I’ve had to buy extra data and that’s already cost me about £80 I think.’

The teenagers also feel let down by the food and the cleanliness of the hotel, and have safety concerns due to a series of disturbances.

‘The food is so oily, it’s the oiliest thing I’ve ever had and most of it is just cooked vegetables bathed in oil and salt. They gave us an omelette once and it tasted like the sea, it was horrible.

‘For us vegetarians the other day we had sweet potato but it tasted like pickle.’

Rachel added: ‘It’s actually quite scary. There are lots of people shouting and there’s a woman on our corridor who’s always crying and shouting at the doctors. She once threatened: ‘If you touch me, I’ll kill you.’

‘And then and there are people throwing things out of their window. So the army and the police gather around and start shouting up.

‘On one of the days they didn’t bring our dinner up for two or three hours because of all the disturbances.’

Their parents are also worried about the physical and mental health of their daughters.

Rachel’s mother Margaret Goldsmith, 49, a stay at home mother-of-three, said: ‘They’re completely isolated and the rooms are stripped down to basics so they have no laundry facility.

‘They’ve had no sunshine as they’re not allowed outside at all.

‘I’ve had to send my daughter vitamin D because they’re not given any fresh fruit or fresh salad and they don’t even have a balcony they can go out on. Mentally, it has been really, really tough for them.’

LilyRose’s mother, Beverly Wallace, a musician, added: ‘There are public order issues almost every day. I’ve managed to get through to reception and they told me once that there was an incident in the hotel, that the staff couldn’t leave their rooms, the girls would be fed at some point that evening, but it currently wasn’t safe to get food to them.

‘Lily had her most recent test on Monday at 11:30pm at night. Somebody knocks on her door full hazmat suit, full face mask – how is it acceptable to knock on an 18 year old’s door at 11.30 at night and do that swab test?

‘And also it’s really invasive, it’s not like the British tests. They don’t do the throat, they go up the nose so far that the whole stick goes up your nose, so it kind of goes to the back of your throat.

‘Lily says you almost pass out it’s that painful, it’s that much of a shock. And actually, this time the person felt sorry for her. They actually reached out and touched her because I think they felt she was literally going to faint, because it’s such an aggressive way of testing.’

Mrs Wallace said that the girls just wanted to have a holiday after the ‘worst summer you can imagine’.

She said: ‘We’re not saying the girl shouldn’t have declared that they felt unwell or had the loss of sense of taste and smell. They all feel they did the right thing. And they would do it again because they wouldn’t want to put anybody at risk. But 14 days in quarantine was what they were expecting. They had no clue it was an indeterminable indefinite stay, which was based on science that’s just wrong and the rest of Europe doesn’t respect.’

The teens’ plight mirrors that of Will Castle, 22, Rhys James, 23, Quinn Paczesny, 20, who have been kept in quarantine in Florence since August.

They keep testing positive but doctors have told them they are unlikely to be infectious and that the tests are probably detecting dead coronavirus cells that are left in their systems.