The LAPD have released footage showing the moment a teenager was shot dead by an officer outside of his home and his screaming mother while he wielded a toy rifle.

Cops arrived at 19-year-old Luis Herrera’s home in south Los Angeles on September 17 after he himself called 911 to allege that his father had been abusing him and his mother. That call later proved to be untrue.

Body cam footage shows the moment that two uniformed officers approached the home. Before they got to the door, Herrera appeared while holding what looked like a black rifle.

The officers retreated to the side of the house and sought cover amid trash cans. They can be heard yelling: ‘Put that down, put that down,’ and ‘let go of that gun.’

After ignoring the officers’ multiple commands to drop the apparent weapon, the officers begin shooting Herrera. The video shows the teen fall the ground and drop the weapon.

He appears to be still moving in the video, but is incapacitated.

Upon further inspection, the rifle in question turned out to be an Airsoft gun, a BB-style toy that fires plastic projectiles.

As the officers approach the home, 19-year-old Luis Herrera can be seen emerging from the front of the house clutching what appeared to be a large black rifle 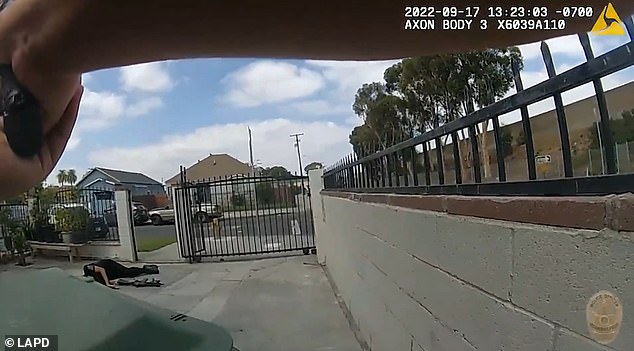 As he lay on the ground, the officers continued to demand that he drop the gun 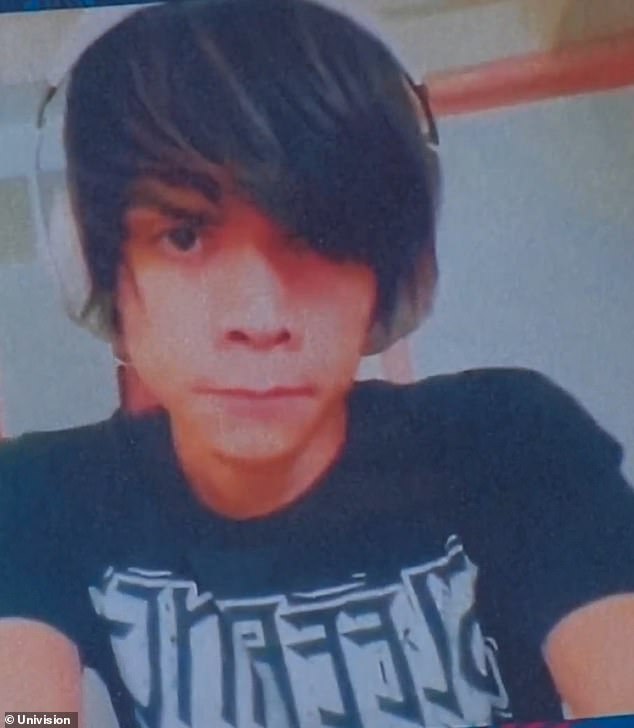 Teenage victim Luis Herrera, shown here in a Univision news broadcast, was armed with two Airsoft style guns when he was shot dead 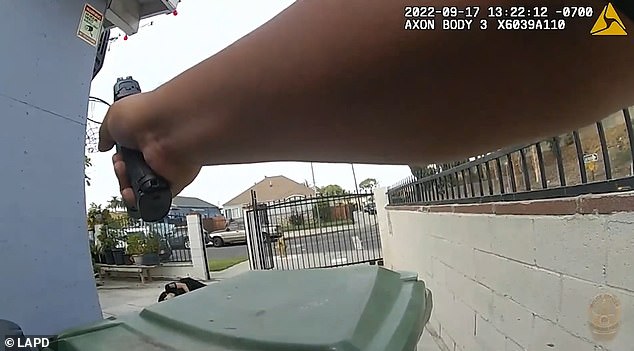 Behind the garbage cans the officers opened fire on Herrera, hitting him six times, the victim’s father said

As Herrera lay mortally wounded, officers placed him in handcuffs 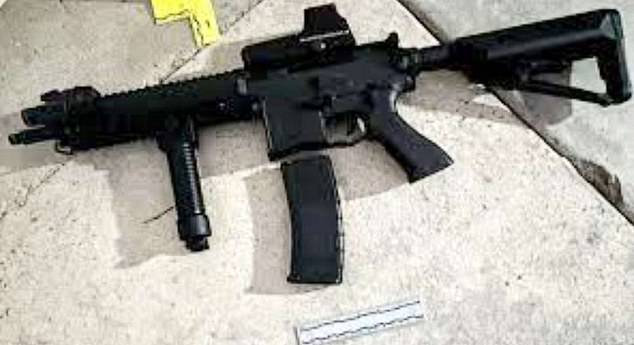 The Airsoft rifle that was wielded by Herrera, many prominent gun manufacturers allow Airsoft to use their designs in their toys

In the 911 call, Herrera told an operator: ‘My dad is drunk, and he started beating on my mom, and I tried to get involved, and now he attacked me.’

The new video released by the LAPD also shows security footage from Herrera’s backyard. That footage shows his family’s reaction to the shooting.

The video is presented by LAPD spokesperson Captain Kelly Muniz. Muniz describes the events, saying: ‘He did not comply with officers commands and shouldered the rifle and pointed directly at the officers resulting in an officer-involved shooting.’

Video also shows the officer approaching Herrera’s bloodied body after the shooting and handcuffing him.

When they roll him over, a pistol can be seen under his body surrounded by blood. Investigators have said that it was also an Airsoft gun.

A woman can be heard yelling in the aftermath of the shooting: ‘It’s a toy. Why did they assault him?’ The same woman yells repeatedly throughout the video: ‘That’s my son.’ 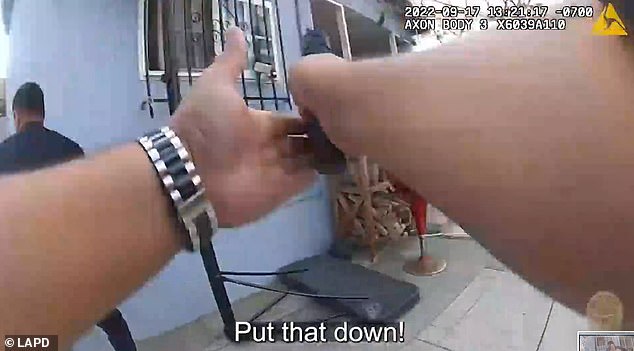 The officers quickly drew their weapons, demanded that Herrera drop the gun and ran for cover at the side of the home 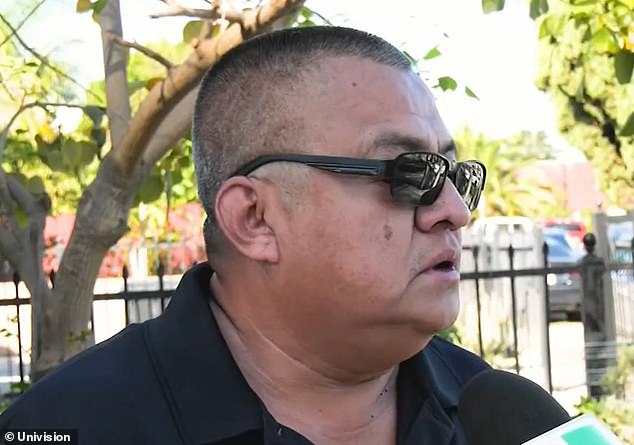 The teen’s father, Vicente Herrera, shown here, described the teen’s behavior as very unusual on the day that he was shot

Herrera’s father, Vicente Herrera, also emerges and told officers that the rifle was a toy. The officers tell him to go back in the house.

Vincent told the Los Angeles Times the day after his son’s death that the fight began when the teen hit a dog. His father said: ‘He hit my dog and we argued — I said the dog is like a little kid, don’t hit it.’

He went on to describe his son as a quiet and immature, saying that he enjoyed playing video games. Herrera was due to turn 20 two days before the shooting.

Vicente admitted that the argument he had with his son was out of character.

He said: ‘I don’t know what happened in his mind.’

At the time, Vicente alleged that the responding officers had not commanded his son to drop the gun. He also said that his son was shot six times.

Paramedics with the Los Angeles Fire Department determined that Herrera died at the scene after being shot in the chest.

The police officer who fired the fatal shots has been named as Police Officer II Luis Navarrete. No officers were injured in the shooting.

He has been placed on administrative leave pending an investigation by the LAPD’s Force Investigation Division.

Muniz says in the video: ‘We also do not draw any conclusions about whether the officers acted consistent with our policies and the law until all the facts are known and the investigation is complete.’

Airsoft guns have long been a concern for law enforcement officers due to their apparent authenticity. Major firearms manufacturers such as Glock and Barretta allow their designs to be replicated for Airsoft versions.

In 2019, three Democratic senators sent letters to the Consumer Product Safety Commission demanding that stricter rules be adopted regarding the sale of the toys.

There are no federal laws or regulations regarding the sale of the toys, according to the Trace.

Since 2014, Google has banned the advertising of Airsoft guns on their platform while in 2018, Walmart ceased selling the toys.