A teenager told he’d never walk again after snapping his shin in a freak sledging accident has taken his first steps.

Ben Thompson, 19, begged doctors to ‘chop his leg off’ after hitting a metal sign while sliding down a snowy hill in Burton-Upon-Trent, Staffordshire, in November.

The horror accident saw his shin bone snap and puncture the muscle and artery in his calf, completely destroying the nerve system in his leg.

He was told he might lose his leg during surgery at Queen’s Hospital Burton — and even after the surgery was a success, medics told him he might never walk again.

Mr Thompson’s leg continued to expand because of infections in the weeks after his operation and doctors had to give him a skin graft.

The ex-warehouse worker asked doctors to cut off his leg because of the unbearable pain — which felt worse because he was not on the ‘right medication’.

Five months later, Mr Thompson has started to walk again, although he will remain on pain meds for the foreseeable. 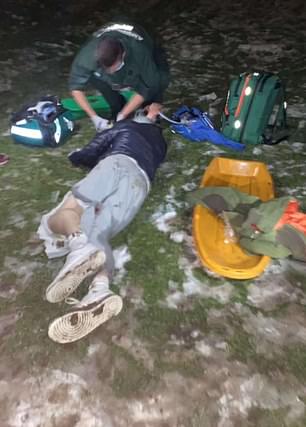 Ben Thompson (left), 19, smashed into a metal pole while sliding down a hill on a plastic sledge in Burton Upon Trent, Staffordshire, in November last year (right) 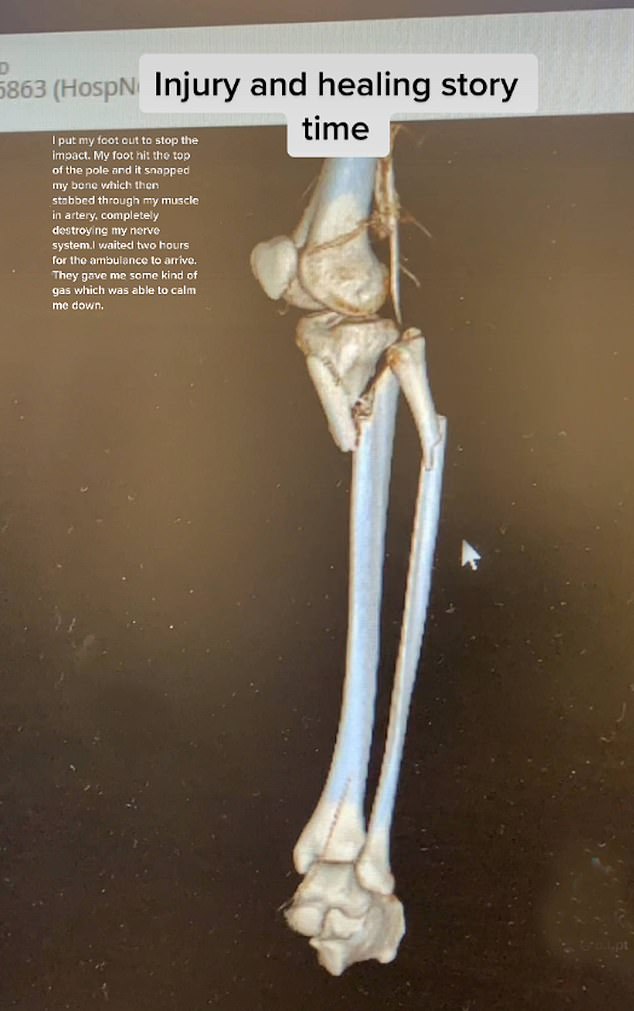 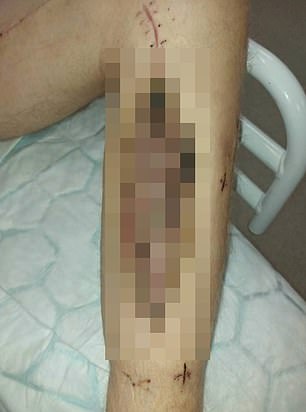 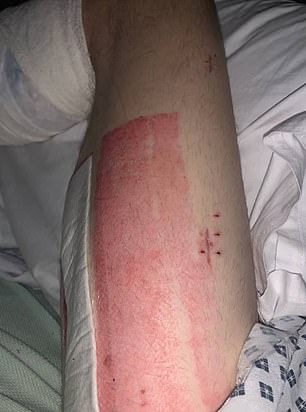 He was told he might lose his leg during surgery — and even after he was operated on, medics told him he might never walk again. Mr Thompson’s leg continued to expand because of infections in the weeks after his operation and doctors had to give him a skin graft (right) 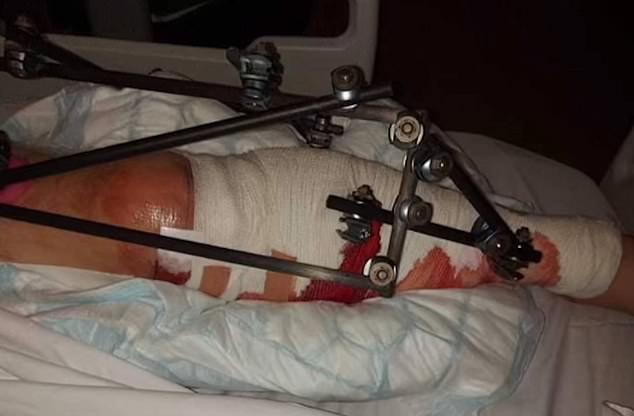 HOW IS A BROKEN LEG NORMALLY TREATED?

A broken leg will be severely painful and may be swollen or bruised and you usually won’t be able to walk on it.

If it’s a severe fracture, the leg may be an odd shape and the bone may even be poking out of the skin.

There may have been a ‘crack’ sound when the leg was broken, and the shock and pain of breaking your leg may cause you to feel faint, dizzy or sick.

First, a doctor will give you painkillers and may fix a splint to your leg to secure it in position and prevent further damage.

For severe pain, you may be given pain-killing gas through a face mask or medication through a drip into a vein.

An X-ray is often necessary to assess the fracture.

If the broken bone is still in position, you’ll usually just need a plaster cast. This holds the bone in place so it can heal.

If there’s a lot of swelling, you may just have a splint or cast around the back half of your leg until the swelling goes down. A full cast can be fitted a few days later.

You may be provided with painkillers to take home and information on how to look after your cast.

If the bones are misaligned, a doctor or surgeon may need to put them back into place. This is known as ‘reduction’.

Sedatives are sometimes provided before the procedure and local or regional anaesthetic is used to numb the site of the break.

In some cases a general anaesthetic is needed, which means you’ll be asleep during the procedure.

Once the bones are in the correct position, a plaster cast can be applied.

Severe fractures are often treated with surgery to realign and fix the broken bones. Surgeons can fix bones with metal wires, plates, screws or rods.

Describing the crash, Mr Thompson said: ‘I went sledging on a hill in Shobnall Park with somebody else.

‘We didn’t see the skinny metal pole ahead. At the last minute the other rider was able to get off but I wasn’t so lucky.

‘I put my foot out to stop the impact and the pole has smacked the bottom of my foot.

‘This snapped my bone which then stabbed through my muscle and snapping both my artery and my nerve system from the shin down.’

After arriving at the hospital in Burton, he was taken to to Royal Stoke University Hospital where he was given emergency surgery to fit metal pins into his leg and hold his shin bone in place.

They told him his leg may not be salvageable and that he could wake up from a second surgery days later as an amputee.

Medics managed to save his leg, but the former warehouse worker was told he would be disabled for life and may never walk again.

After surgery, Mr Thompson’s muscle began expanding again, leaving him in need of a skin graft on either side of his calf with doctors taking skin from his thigh.

At times the pain got so much for Mr Thompson that he repeatedly begged doctors to amputate his leg.

However, a change of medication helped Mr Thompson with the pain and slowly began exercising his leg again.

He said: ‘I was in hospital for three weeks in constant pain and no sign of recovery.

‘Around two months later the doctors said I’d still be disabled and they couldn’t see much sign of movement.

‘I’m also on permanent medication for the rest of my life. Walking is very hard for me and even five months later my foot hasn’t healed any better, but I’m learning to live with it and make adjustments.

‘Because they hadn’t given me the right medication I was in complete agony and was begging them to chop it off.

‘I was very close to going through with it but decided not to because I didn’t want to give up.’

Mr Thompson documented his recovery on social media, where followers have encouraged him with his progress.

He said: ‘Learning to walk was very hard because not only could I not feel my leg but I had been lying down non stop for over a month so my leg muscle was very weak.

‘I had a big heavy boot to begin with and a pair of crutches but would still struggle to walk anywhere.

‘I would practice in my bedroom and exercise my muscles. Once I got my foot brace my foot was a lot easier to move around.

‘I was very determined to get better and in a few more months I was able to move around my house.’