EXPRESS INFORMER > News & Politics > Teenager, 19, kills ‘paedophile priest who abused him’ by ramming a crucifix down his throat

Teenager, 19, kills ‘paedophile priest who abused him’ by ramming a crucifix down his throat and suffocating him in France

A 19-year-old man has been arrested for killing a suspected paedophile priest by ramming a crucifix down his throat after the clergyman allegedly abused him in France.

Alexandre V., whose full name has not been disclosed, attacked 91-year-old Catholic Roger Matassoli while working at the holy figure’s home in Agnetz, Oise, northern France.

The man was charged for torture, murder and resisting arrest, but had to be transferred to hospital when he was arrested on psychiatric grounds, after he was caught fleeing the scene in the victim’s car.

Matassoli had been accused of sexually abusing at least four boys including the victim and his father between 1960 and 2000. 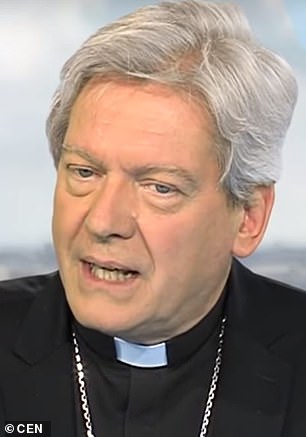 Father Roger Matassoli, pictured left in 1980, was found dead in his home in Agnetz, Oise, northern France, with a crucifix shoved down his throat. The priest had faced accusations that he abused at least four children. Beauvais bishop Jacques Benoit-Gonnin, right, said he was removed from duties in 2009

The priest was found dead by officers with signs of torture on his body and appearing to have suffered asphyxiation.

The incident took place on November 4, but the attacker was not formally charged until December 26. The suspect was employed by the victim as a housekeeper.

The suspect’s father – named as Stephane by French media – was allegedly abused by the priest as a child as was the suspect.

Stephane’s father killed himself when he learnt about the abuse, and Alexandre also tried to kill himself following the abuse, French reports have claimed.

‘This man has shattered a whole family,’ Stephane said.

Police are pursuing their investigation based on the hypothesis that this was an act of revenge, according to local media. 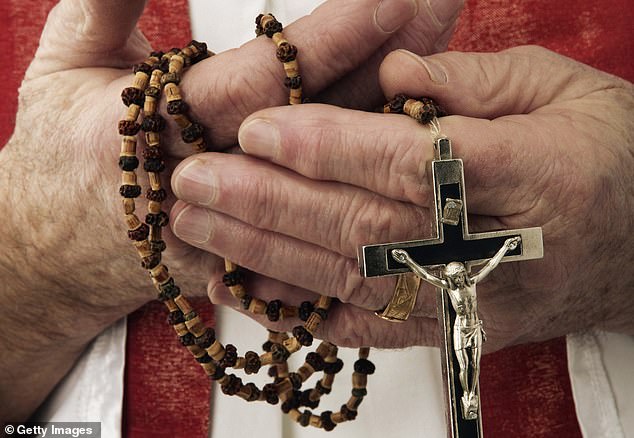 The priest’s attacker was charged with murder, torture and resisting arrest (stock image)

The suspect has indicated to investigators having no recollection of the events he is suspected of having committed.

After the priest’s murder, Beauvais bishop Jacques Benoit-Gonnin said Roger Matassoli had been removed from his duties in 2009 after abuse allegations emerged.

However, conflicting local media reports also state that 2009 was the year that the priest retired due to old age.

It also later emerged that bishop Jacques Benoit-Gonnin allegedly kept Matassoli on the payroll until 2018, when he took Alexandre and Stephane’s testimony into consideration, as well as the testimony of at least two other alleged victims, still according to local media.

Reports allege that the priest had been allowed to carry on working due to ‘ecclesiastical errors’ and due to a succession of bishops putting off dealing with the issue.