Teenager, 18, is fined £120 after telling police there was ‘nothing they could do’ when they caught him breaking Covid lockdown rules by being out in a city centre with a group of people

A teenager has been fined £120 after telling police there was ‘nothing they could do’ when they caught him breaking lockdown rules.

Nariah Ellison, 18, was spotted with a group of people in Manchester city centre during the first coronavirus lockdown in April.

A police officer approached the group around 7pm and asked why they were out.

Ellison proclaimed he ‘didn’t care’ about the rules and said ‘there was nothing the police could do’.

The officer slapped him with a fixed penalty notice and, after failing to pay the amount, he was taken to court. 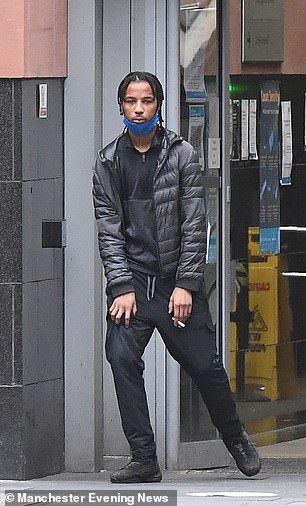 Teenager Nariah Ellison, 18, (pictured outside court) has been fined £120 after telling police there was ‘nothing they could do’ when they caught him breaking lockdown rules

Nicola Morgan, prosecuting, told Manchester Magistrates’ Court that the officer ‘spoke to the group and none of them were able to provide suitable reasons for being out of their home’.

She added: ‘The officer tried to engage with the group and offered advice with regards to the restrictions and the need to stay at home during the national lockdown.

‘The defendant told the officer he didn’t care and that there was nothing the police could do.’

Ellison, from south Manchester, was told if he didn’t comply the officer would have no option but to fine him.

Initially, he refused to give his personal details. When he did, he was given a fixed penalty notice.

‘The defendant failed to make payment and as a result has been prosecuted,’ Ms Morgan added.

Ellison, of Broadfield Road, Moss Side appeared before magistrates on Friday, November 4. 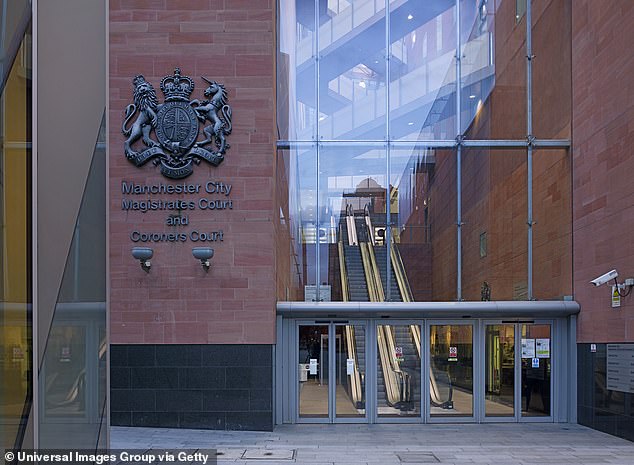 Ellison has been forced to fork out a total of £120 – made up of a £40 fine, a £46 court cost and a £34 victim surcharge during an appearance at Manchester Magistrates’ Court (pictured)

He pleaded guilty to a charge of leaving or being outside of place where living in England, without reasonable excuse, during the coronavirus emergency period.

The charge is an offence under the Health Protection Regulations.

He has six previous convictions, most recently for drugs offences in May 2019, the court heard. Ellison was not represented in court.

Asked why he was in the city centre he said: ‘I don’t have a reason.’

Chair of the bench Richard Blackman said: ‘The officer gave you the opportunity to pay a fixed penalty notice but you are now going to have to pay a bigger penalty because you simply didn’t want to comply.

‘Do you understand why you should have complied?

‘You must have seen many people unwell and the need for the restrictions to stop the virus spreading?’ Ellison replied: ‘Yes.’

Passing sentence, Mr Blackman said: ‘We have noted a little bit of remorse there, not a huge amount but a little bit.

‘You understand why your actions were wrong that’s the important thing.

‘When you are told not to be somewhere, then it’s clear you shouldn’t be.’