A teen has revealed how he fought off a deadly shark attack as he returned to school only 24 hours after his close brush with death.

Jack Shaw, 15, was swimming with his friend Tiarna Athanasiou, 15, at the Ocean Grove Beach, near Geelong on Victoria’s Bellarine Peninsula on Monday evening.

The pair were in neck-deep water when Jack was bitten on his waist and Tiarna, on her lower leg, by a suspected bronze whaler.

Jack Shaw, 15, (pictured) has returned to school just 24 hours after he was attacked by a shark while swimming with his friend Tiarna, 15, in neck deep water at the Ocean Grove Beach near Geelong on Monday

Returning to school 24 hours after the ordeal, a bandaged Jack described how he helped his friend fight off the shark during the harrowing attack.

‘I turned around, it got me on the back and then I said, ‘swim!’ so sent it as fast as we could to get back into shore,’ he told Nine News.

‘She looked at it and it was a shark,’ Jack said.

Jack was discharged from Geelong Hospital on Monday with a one-centimetre deep gash and bite marks to his back. 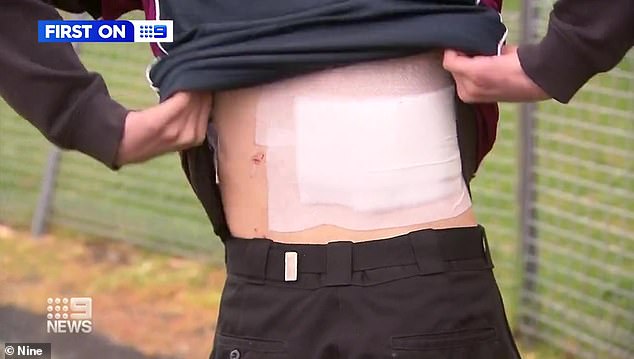 The 15-year-old suffered a one-centimetre gash (pictured) and was discharged from Geelong Hospital on Monday while his friend Tiarna, is recovering from surgery on Tuesday

His friend Tiarna suffered a cut to her hand and had surgery for a ‘gaping wound’ to her leg on Tuesday.

Her mother Corrie Athanasiou told the Geelong Advertiser she believes the quick-thinking actions of a surfer helped save her daughter from losing her leg.

‘He went over and put her on his board and tied his surf board strap around her leg as a tourniquet,’ she said.

‘The surgeon said that could have saved her leg… they were very lucky.’

She said she was impressed by her daughter’s bravery ‘considering the trauma and injuries’ and thanked bystanders who rushed to the pair’s aid. 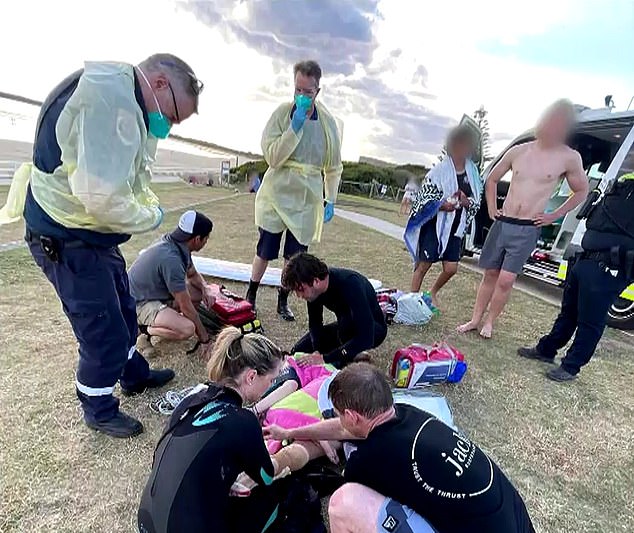 ‘I can’t express how grateful I am to the amazing people who selflessly helped her and her friend to shore and looked after her until the paramedics arrived,’ she wrote on social media.

The Hobbs family witnessed the terrifying ordeal with mum Diane, a former trauma nurse, first on the scene to treat the pair before paramedics arrived.

‘She (the teen girl) sustained a couple of bites, one to the right lower below knee, the calf area, and the other one to her hand,’ she told 3AW Radio.

‘She actually saw the shark… and she bashed it away.

‘Tonight we went for a leisurely paddle at Ocean Grove beach and while we were in the water a couple of teenagers near us got attacked by a shark,’ Mr Hobbs posted on Facebook.

‘We could see them splashing but didn’t know what was happening. We didn’t see the shark, just the splash, but we heard the cries and our family mobilised.’

‘The teens were obviously shocked but taken to hospital.’

Local authorities are yet to confirm the species of shark that attacked the teens – but it’s believed the predator was either a reef shark or bronze whaler.

‘No one was able to describe the shark at the time, but Fisheries Officers hope to speak to the victims to gain more details,’ a Victorian Fisheries Authority spokesman said.

‘Life Saving Victoria hopes to have a drone and light plane in the area this morning to aid in searching for and identifying the shark, as well as confidently clearing the beach of its presence.’