Team GB synchronised swimmers show off their skills in stunning new images to hit back at cruel trolls who mock them for their ‘muscular’ physique.

Kate Shortman, 19, and Isabelle Thorpe, 20, from Bristol, will be representing the sport at the 2020 Olympic Games in Tokyo. 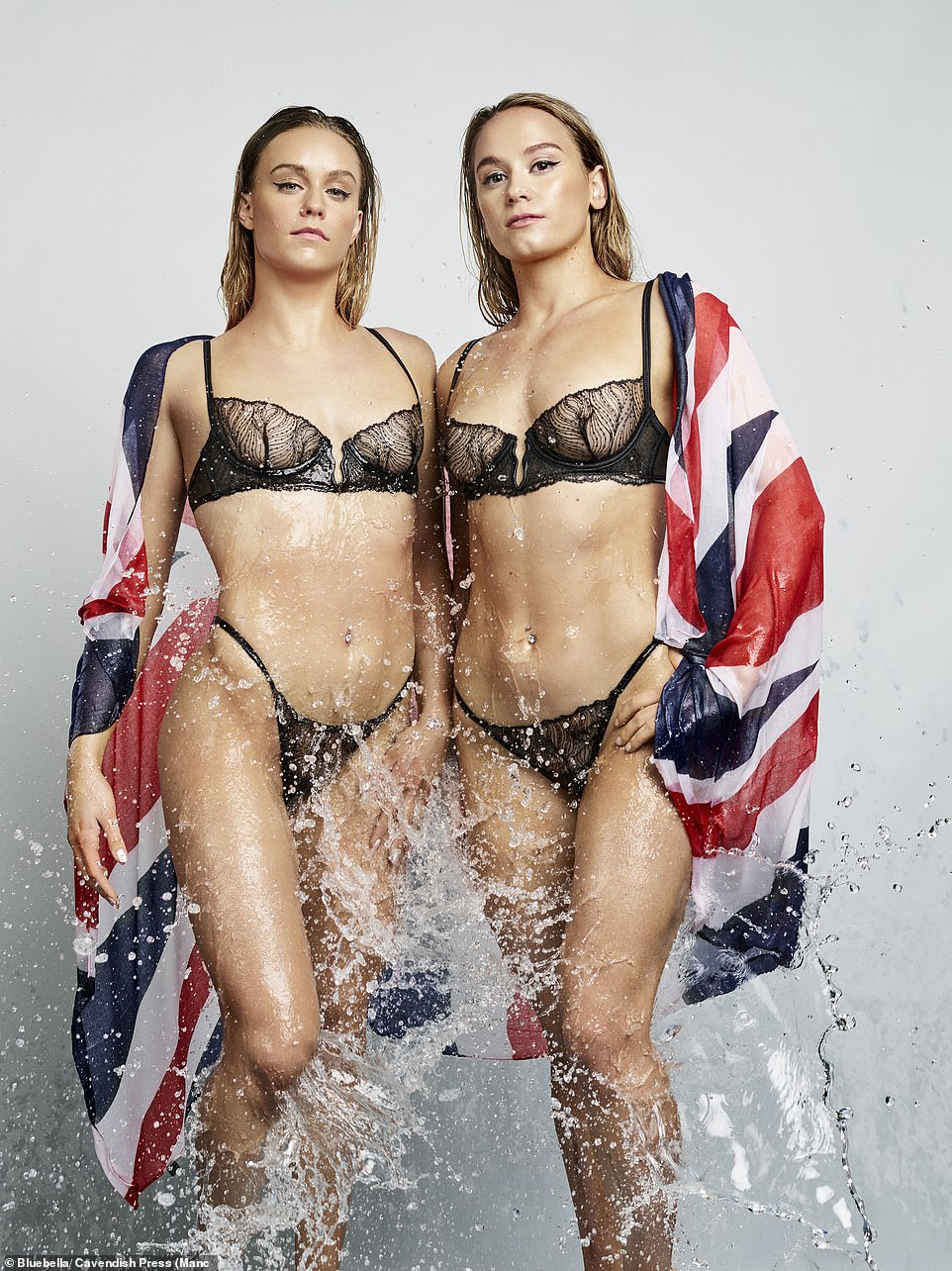 Kate, 19, (left) and Isabelle, 20, (right) both from Bristol, are backing a new campaign with lingerie brand Bluebella to celebrate female empowerment through sport

They are backing the #BeStrongBeBeautiful campaign to get more teenage girls back into sport, and posed in the photoshoot to show how beautiful athletic bodies look.

The Artistic swimming duo want to raise awareness of the fact that more than half of secondary school girls drop out of sport after the age of 13 due to body issues and negative experiences of PE lessons.

According to the Women In Sport survey, 64 per cent of girls will have quit sports altogether by the age of 16.

Kate and Izzy are among Team GB’s leading contenders for gold at the games in Japan and want young girls to know that women’s athletic bodies are beautiful – and that they should not feel ashamed to look physically strong. 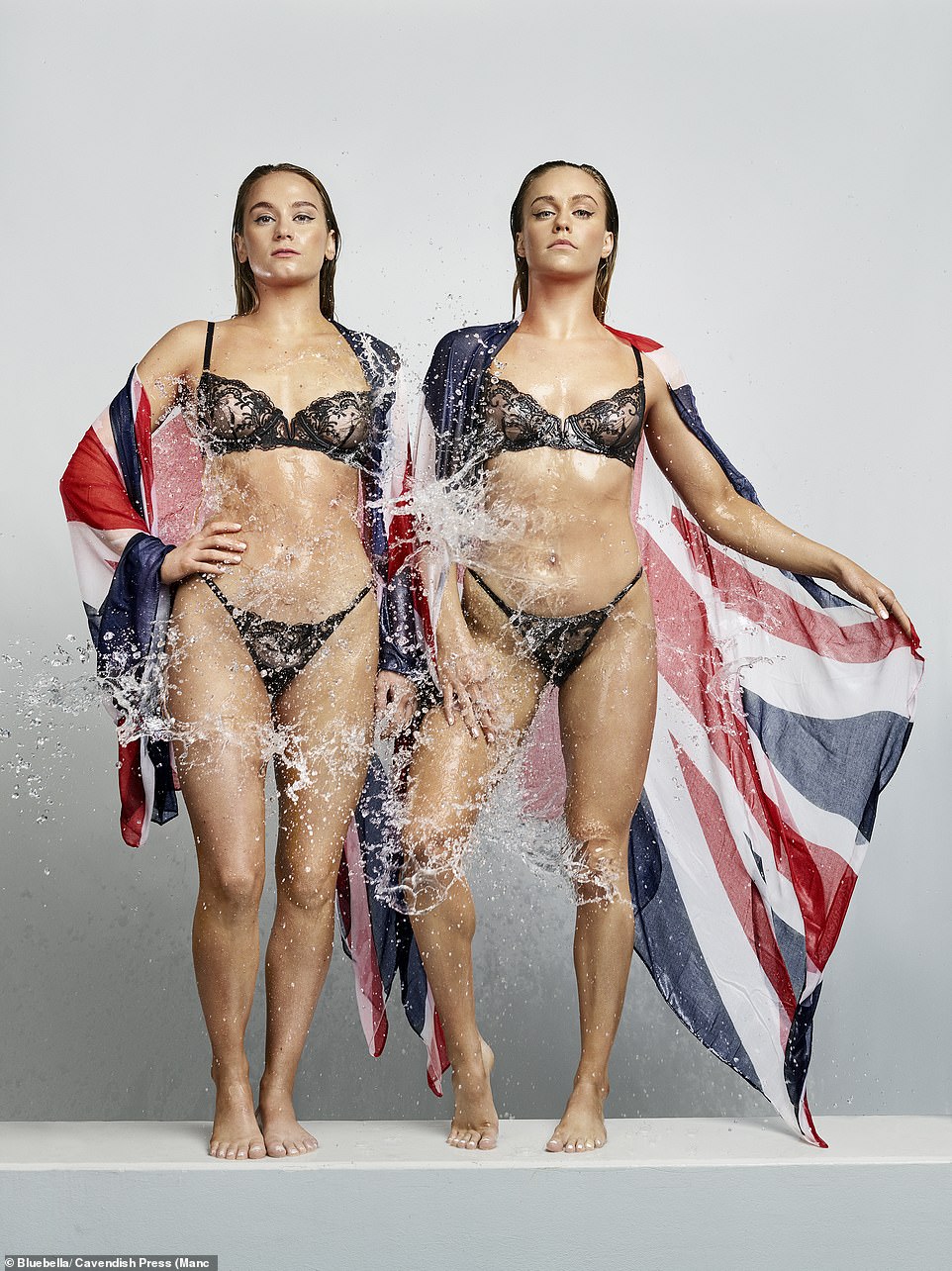 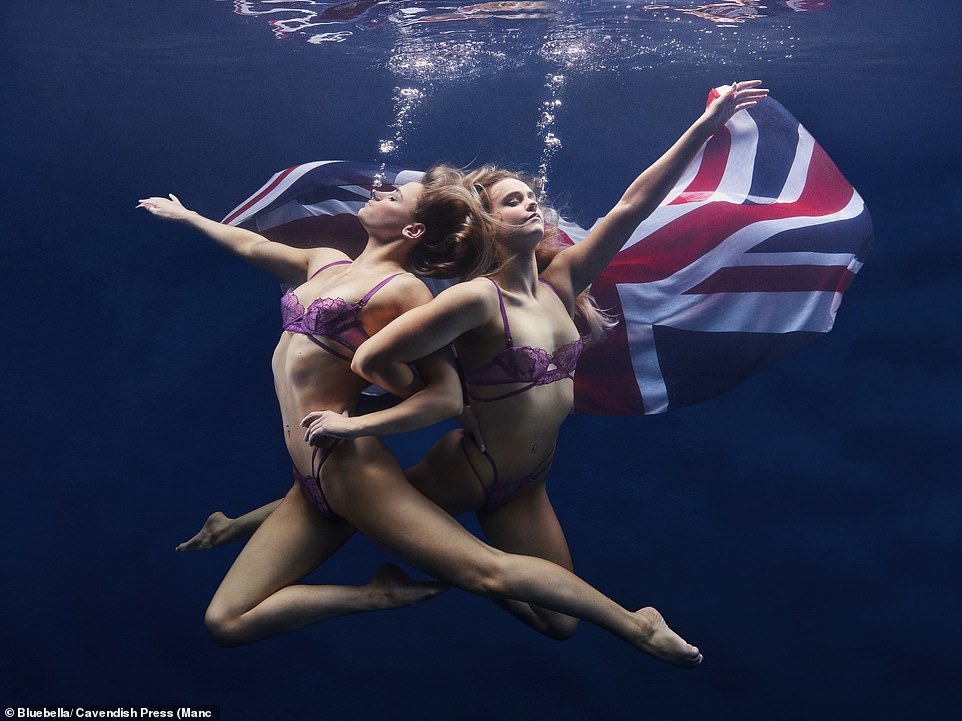 They are backing the #BeStrongBeBeautiful campaign to get more teenage girls back into sport, and posed in the photoshoot to show how beautiful athletic bodies look 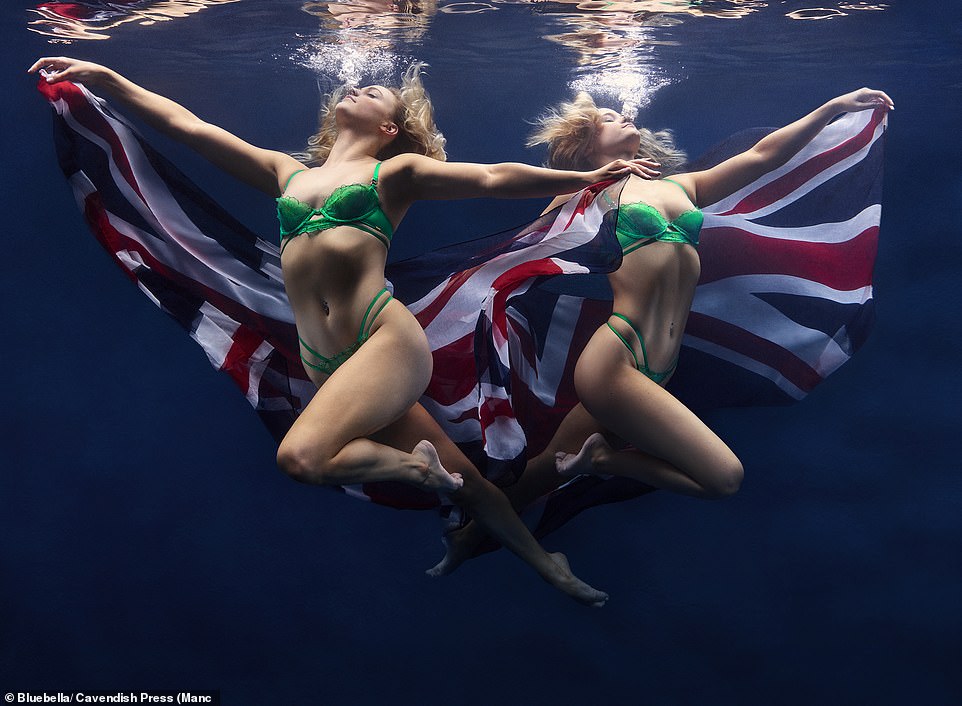 They reveal how they overcame consistent comments about having ‘big shoulders, small boobs and small bums’ during their 10 years of training to reach their Olympic goal 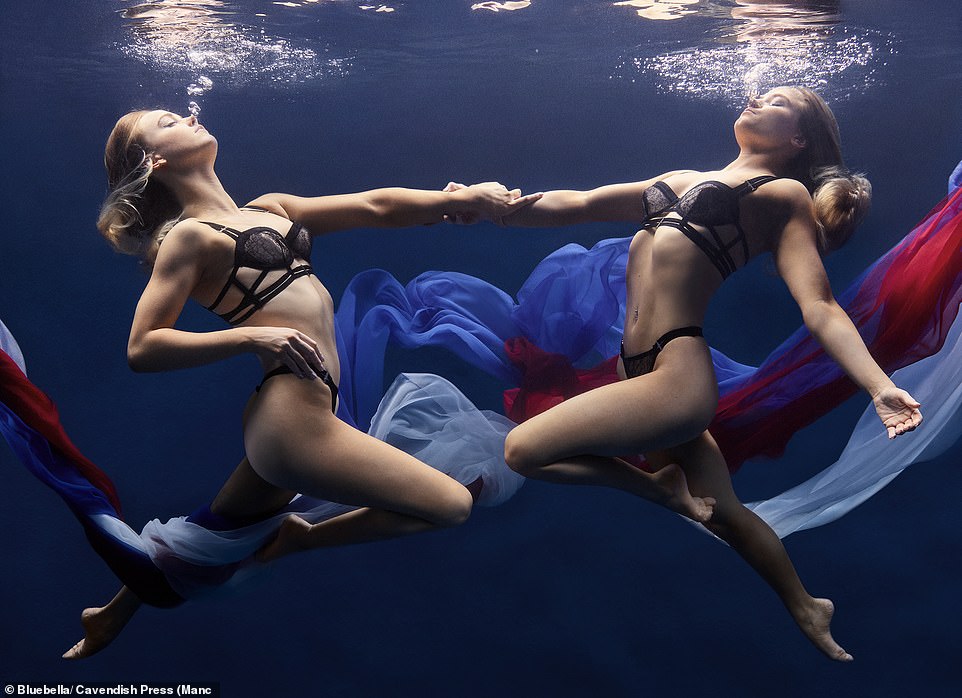 Izzy said that in the past year she has began to feel ‘a lot more confident’ about her body and is proud of her physique. When she was younger she would try to hide her shoulders by wearing baggy T-shirts as they began to grow as she swam

‘It’s utterly unfair that society’s expectations for boys are to have this perfect image of health by going to the gym, lifting weights, and looking really muscular and strong, and yet for girls it’s the opposite.

‘You should be stick thin and with delicate feminine features. It’s unhealthy for young girls to see this and think I have to restrict what they eat and count calories, it’s unhealthy mentally and physically to think that.’

But both women admit that when they were younger they both felt self-conscious when their bodies became more muscular and athletic as they committed themselves to their sport.

They reveal how they overcame consistent comments about having ‘big shoulders, small boobs and small bums’ during their 10 years of training to reach their Olympic goal.

Izzy said: ‘Swimmers tend to get big shoulders and when I was younger I would wear things to cover my shoulders, baggy clothing that would make them less noticeable.

‘If I was posting pictures on social media I would try and crop them out of pictures, or try and make them look less prominent to avoid getting negative comments.

‘In the past year I begun to feel a lot more confident about my appearance and now we are both proud of our muscular bodies.’

She added that from Year 7 to Year 9, PE in schools for boys and girls were separate, but when they had to mix again, ‘lots of girls dropped out of sport’. 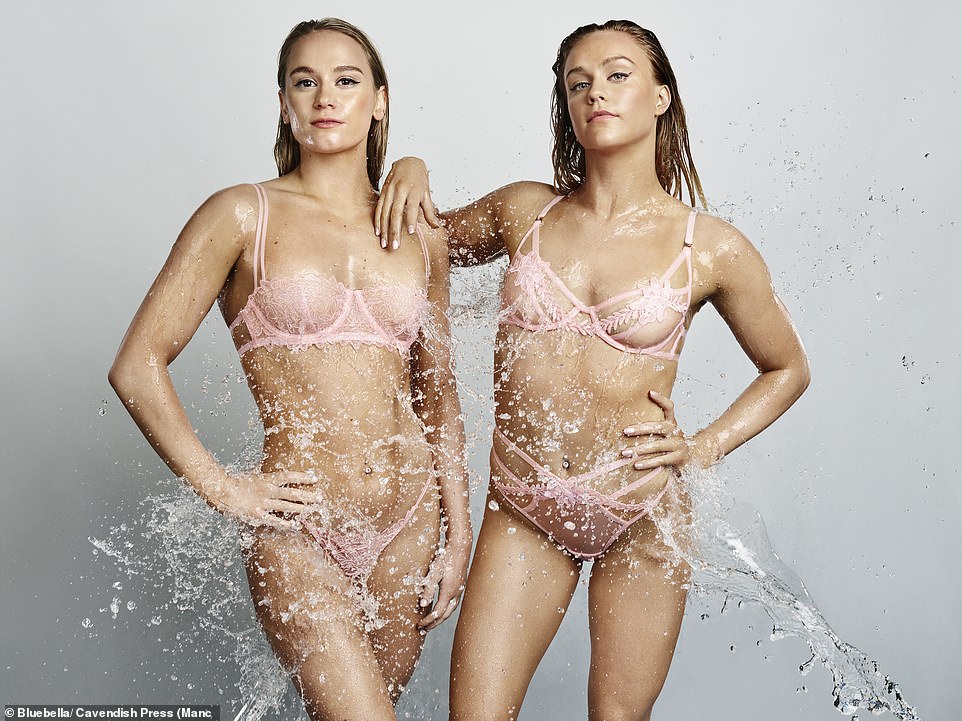 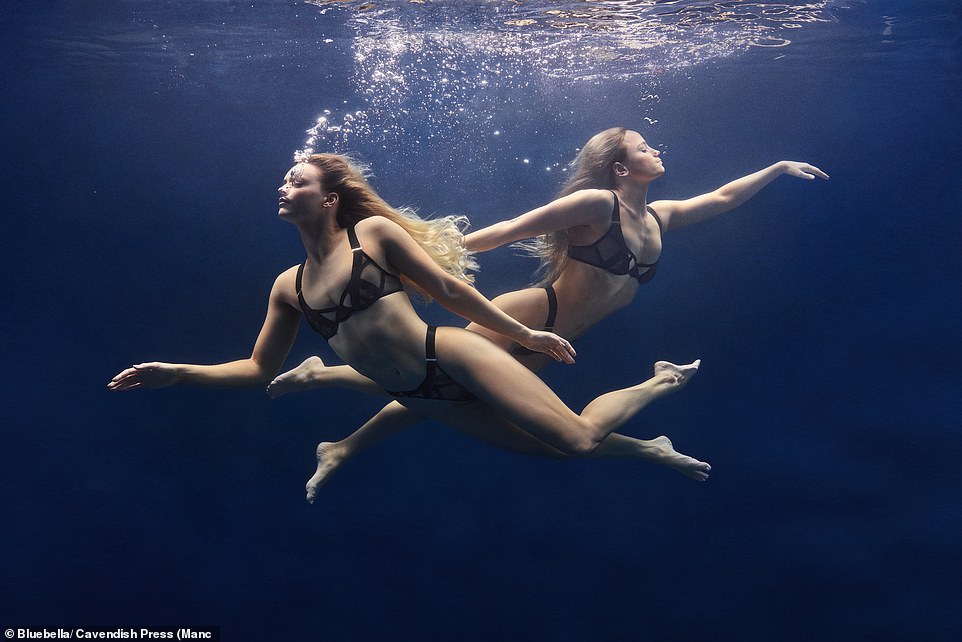 Izzy added: ‘They were worried about what the boys would think and say and didn’t want to be exposed in front of them especially with swimming.

‘But when you do swimming you are very exposed, walking around a pool and there’s always boys there, and you’re wearing a tiny costume it’s quite intimidating.’

They don’t agree that segregation of the sexes in PE classes is the solution to getting more girls back in sport, but do believe more needs to be done to educate and build confidence.

Kate said: ‘Rather than segregating we should be taught more to accept our bodies and your shape; the focus shouldn’t be about what you look like.

‘The problem is that even in an all-girl environment, many girls didn’t feel able to open up and share their body insecurities.

‘There were probably quite a few girls we trained with years ago that dropped out when their bodies started changing.’

Kate and Izzy beat the competition for a place at the Tokyo games at the FINA Artistic Swimming Qualifiers in June this year in Barcelona.

Only nine countries have qualified for the Olympics and they will be competing against teams from Austria, Belarus, France, Netherlands, USA, Israel, Liechtenstein and Colombia.

It has taken 10 years of training to get to this stage and during that time they often put up with incredibly personal comments about their increasingly muscular frames.

Kate said: ‘We’ve had it several times where people come up at the public swimming pool we are training at and say “can you cover yourself up please”.

‘We only wear one-piece costumes that are the same as everyone else but it’s because we have an athletic figure the costume naturally sits higher on your hips.

‘It’s not intentional for me to be walking around showing off my hips or my bum. It’s ridiculous because boys can be walking around in Speedos and that’s fine but if girls show any skin, then they are accused of parading their bodies for everyone to see.’