Ministers were last night under growing pressure to boost the uptake of Covid jabs among school pupils following a surge in classroom infections.

Cases among under-18s are ‘higher than ever’, according to the respected Zoe Covid Study – raising fears they could pass it to high-risk older relatives.

Just 20.7 per cent of those aged 12 to 15 in England have been vaccinated in the month since the NHS started its rollout in schools.

Ministers had hoped to vaccinate all pupils by half term.

Teaching unions described their ‘extreme frustration’ with the slow pace of the programme, which they said had been plagued with problems.

Cases among under-18s are ‘higher than ever’ and just 20.7 per cent of those aged 12 to 15 in England have been vaccinated since the NHS started its rollout in schools (stock image)

Teachers have complained of too few vaccinators to meet demand and teams turning up without enough doses, while ‘inconsistent messaging’ from Government advisers has fuelled a degree of hesitancy among parents.

Ministers last week opened up online booking systems to 12 to 15-year-olds, allowing parents to take them to vaccination centres. But not every clinic is able to cater for children.

Geoff Barton, of the Association of School and College Leaders, said Covid ‘continues to cause havoc to the education of children’.

He added: ‘It is extremely frustrating that the vaccination programme has been beset by logistical problems and unforeseen delays, and ultimately fell well short of its original target.

‘It was incredibly remiss of the Government not to have ensured there was sufficient capacity in place to deliver this vital programme at the scale and speed required.

‘We cling to the hope that allowing young people to book their jab at vaccination centres during half term will help boost the numbers who are vaccinated. But there will still be much to do when schools return.’

Paul Whiteman, of the National Association of Head Teachers, said some children were missing their chance of a jab because they had caught Covid. 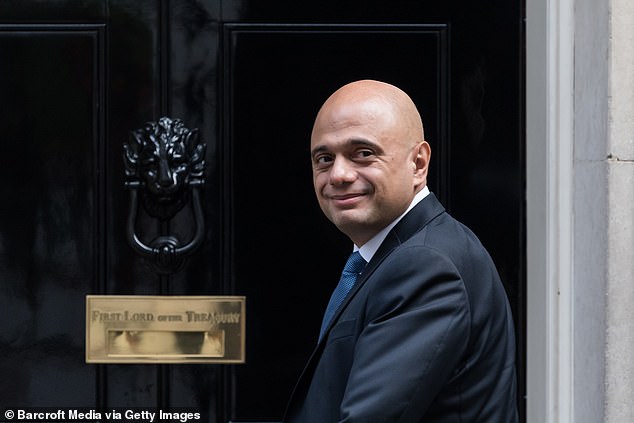 Letters will be sent to 2.5million children in England eligible to receive the vaccine, inviting parents to book a jab through the national booking service as Health Secretary Sajid Javid (pictured) said vaccines are available to young people through a ‘tried and tested programme’

He added that uptake of the vaccine may never be as high among children as the wider population, and called for additional measures such as improved ventilation and ‘reconsidering’ current guidance on close contact isolation. ‘We also need a track and trace system that is working effectively,’ he said.

Uptake among 12 to 15-year-olds in Scotland is more than twice as high as in England at 52.7 per cent.

More than 80,000 children aged 12 to 15 had been booked-in online to receive their Covid jab in England as of yesterday morning – just 3.2 per cent of the 2.5million eligible to receive it.

Letters will be landing on the doorsteps of these 2.5million this week, inviting parents to book a jab through the national booking service.

Dr Bharat Pankhania, clinical lecturer in public heath at the University of Exeter Medical School, said the programme had been poorly organised, adding: ‘There are simply not enough staff to cope with the demands placed upon them.’

Health Secretary Sajid Javid said: ‘The vaccines are available to young people through a tried and tested school immunisation programme and parents or guardians can book a jab at local vaccination sites.’