On Thursday, 83 people evacuated from Wuhan, the Chinese city at the centre of the coronavirus outbreak, were released from their 14-day quarantine at Arrowe Park Hospital on the Wirral in Merseyside.

One of them, Ben Pinkerton, a 23-year-old teacher who works for Education First, an international language tuition and cultural exchange company, wrote exclusively for the Mail last week about his first seven days in ‘Camp Corona’. Here he details the second tougher week, his joy at returning home –and his continuing worry for his girlfriend Odile back in China.

It’s over a week since we arrived at Arrowe Park and the days are dragging now. We’re all still wearing masks outside our rooms. I’ve a feeling this second week is going to be a lot harder than the first when unlimited access to the internet and British food were welcome novelties.

But any negative feelings are washed away when I watch the news on TV and hear about the soaring numbers of people infected in Wuhan where I’d been living and working for more than a year. Being bored or fed up won’t wash. I know I am one of the lucky ones.

And I’ve been keeping myself busy, too, teaching and tutoring my students back in China via WeChat and Skype. Today they all wanted longer lessons. It’s clear that they need to keep busy and distracted from what is going on while cooped up in their homes to avoid being infected. So many people have died and my heart goes out to all of them.

It wasn’t what I expected to do while in quarantine – but I managed to buy a car today!

A friend I tutored while at university sold me his Mark 5 Golf and knocked quite a lot off the asking price. Perhaps he feels sorry for me stuck in here!

Either way, I’m delighted as it means when I finally get out of here and back to my family, I can drive where I need to.

I celebrate by spending the evening playing video games with Josh, my flatmate from China. We played Escape From Tarkov – but the doctors needn’t worry, we aren’t getting any ideas about leaving!

Wake up to the news that someone from inside the facility apparently did want to escape!

TV channels and radio stations are reporting that one of our number had requested to leave. I know that a couple of people had mentioned the idea of going last week. I ask around but nobody seems to know who it is.

Fake news, perhaps, or whoever it is is not admitting it. I think it is a foolish idea. We knew what we were signing up for and, as hard as it is at times, we just have to grit our teeth and get through it. 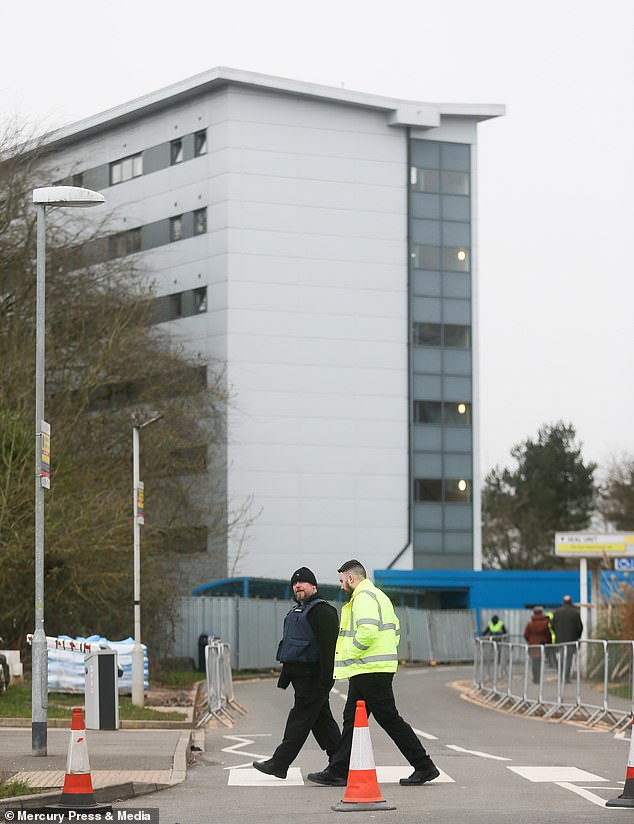 The claims about someone wanting to leave Arrowe Park before quarantine is over has apparently led the Government to announce fresh powers. They’ll now be able to legally make us stay here if necessary.

Actually, it hasn’t caused much of a stir here. They won’t have to handcuff us to our beds!

Most of us were under the impression that, after having signed the paperwork agreeing to quarantine before we boarded our flight from Wuhan, we were compelled to remain here.

Anyway, just 48 hours to go. We’re all keeping our heads down and getting on with it.

Today is an important day because we’re all undergoing new tests to see if we are free of the coronavirus, which I heard on the news has been officially named as Covid-19. I’m convinced I’m going to be OK, but it feels like GCSE results day when the doctor comes in.

Thankfully, everyone is told they are OK! There is a huge sense of relief and morale soars.

For the first time, people are openly talking about their plans after they leave on Thursday. Some people have got a long way to travel. Luckily, I’m going home to Chester which is only half an hour away. I celebrate with a bottle of Magners cider. We’ve had some beers sent in, too – Coronas and Foster’s. Today, I saw pictures online of Budweisers being brought in. The beers are free and they certainly help to pass the time! 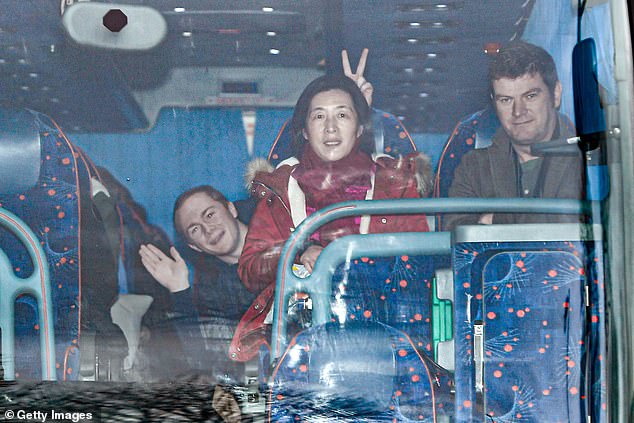 Free at last: The first detainees leave Arrowe Park by coach following their 14-day quarantine at Arrowe Park Hospital on the Wirral in Merseyside

The NHS gets a bad press sometimes, but I don’t have a negative word to say about the doctors and nurses. They have overwhelmed us with kindness and worked flat out to make sure that we are comfortable and OK.

The locals on the Wirral have been great too. The unit is full of cards and gifts that they’ve sent in, many of them for the kids who are here. I take some time today to read the messages. It’s my last full day in the unit and this experience is something that will stay with me for the rest of my life.

Time to go! I say goodbye to the staff and thank them for everything they’ve done

We’re asked to line up and there’s a bit of jockeying to get to the front. I’m disappointed as I am told that I will be on the second coach.

The outside world is a few steps away now. Officials put tags on our luggage and hand us a medical bag, which contains hand sanitiser and some medical documents. And then we’re given a packed lunch.

Suddenly, we’re outside. The first thing I say is ‘I can breathe!’ as I take off my mask. It feels amazing and I stand for a few seconds taking it all in before getting on board the coach.

When I arrive home in Chester, it’s hugs all round for family and friends. It’s been many months since I saw them and it’s great to be together. We order fried chicken from my favourite takeaway and stay up late talking.

Before I go to sleep, I chat to friends back in China. They are delighted that I’m home.

It’s Valentine’s Day but not being able to see my girlfriend Odile [she is Chinese] isn’t ideal and we have to make do with a video call.

It is my first full day of ‘freedom’ and it’s just brilliant to go about normal life again. I take a long walk in the morning and take some time to think.

A lot of expats like me who have left China now face a difficult decision about what to do. I might return but it would have to be a very good job offer. Until then, I’ll make a fresh start in England.

Hopefully, Odile will be able to visit me here soon and I’m sure we’ll make it work.

And I’ll be keeping in touch with all my friends there and praying they stay safe. Part of me will always be there. But now it’s time to try to move on.