While Taylor Swift had the dance floor in mind when she dropped two more remixes of her new song Anti-Hero, she’s now stripping it all down with an acoustic version.

The 32-year-old pop superstar took to her Instagram and Twitter pages on Thursday to announce the new single and shared a photo of herself with longtime collaborator Jack Antonoff, who produced much of her latest album Midnights.

‘Anti hero but make it acoustic,’ she wrote in the caption, before adding, ‘Now at store.taylorswift.com.’

Stripped down: Taylor Swift, 32, announced an acoustic version of her new song Anti-Hero by posting a photo of herself with longtime collaborator Jack Antonoff on Instagram on Thursday

In the photo, Swift can be seen standing next to a piano as she reaches toward the camera with a drink in hand.

She obviously felt right at home by going barefoot while dressed in gray sweatpants and a camouflage shirt, with another plaid shirt tied around her waist.

In keeping with her relaxed state, the Pennsylvania native also pulled her long blonde tresses back off her face and into a loose and messy ponytail.

Antonoff, 38, appears to be showing off his comedic side in the image by contorting his body in a strange position dressed casually in a T-shirt and tan pants. 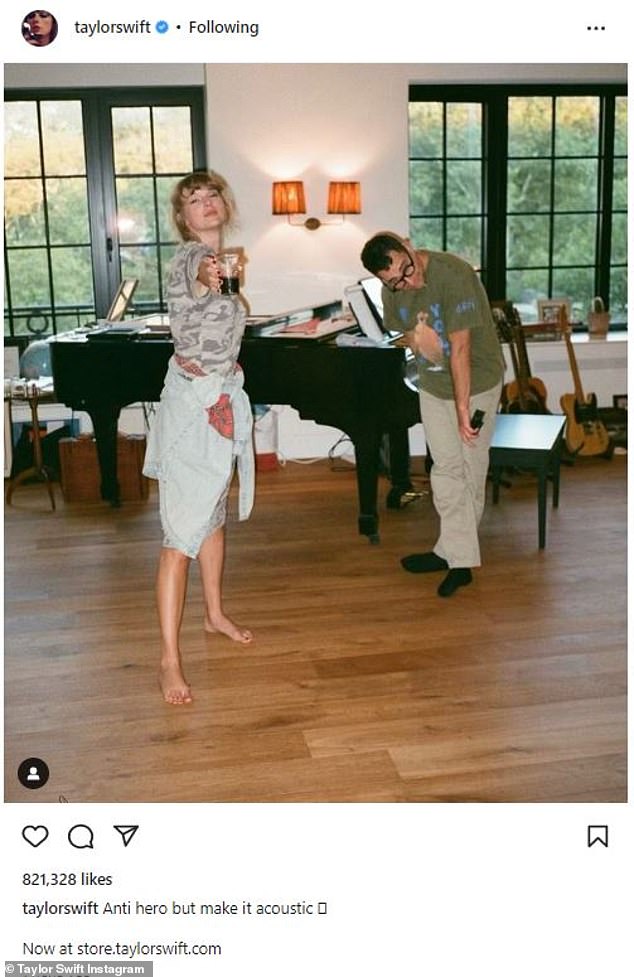 Anti-Hero frenzy: The stripped down version of Anti-hero comes on the heels of several remixes that are more suitable for the dance floor 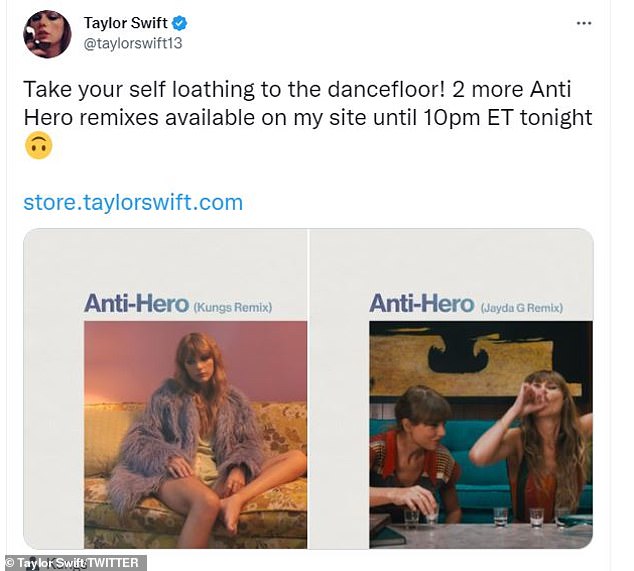 Dance floor-ready: Earlier on Thursday, the prolific singer-songwriter seemingly delighted her Swiftie fans by releasing remixes of Anti-Hero by Kungs and Jayda G

Earlier on Thursday, the prolific singer-songwriter seemingly delighted her Swiftie fans by releasing remixes of Anti-Hero by Kungs and Jayda G.

‘Take your self loathing to the dancefloor! 2 more Anti Hero remixes available on my site until 10pm ET tonight,’ she declared in the caption.

The previous day, Swift took to Twitter to promote another remix of the song, which is the first single from her tenth studio album Midnights.

‘The anti hero (Roosevelt remix) makes me feel hyped enough for an imaginary funeral brawl. It’s available on my site now!’ she confessed when making the announcement on social media. 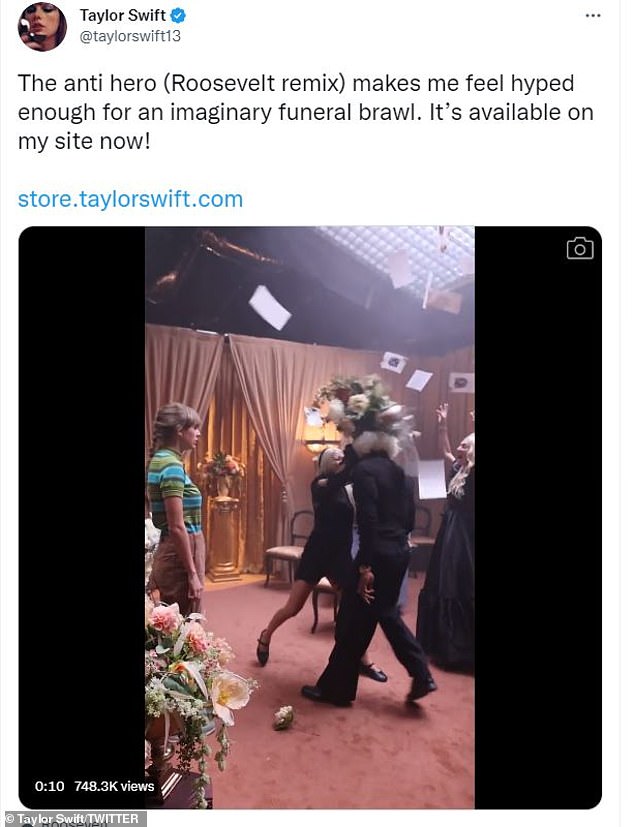 Another version: The previous day, Swift took to Twitter to promote the Roosevelt remix of the song, which is the first single off her tenth studio album Midnights 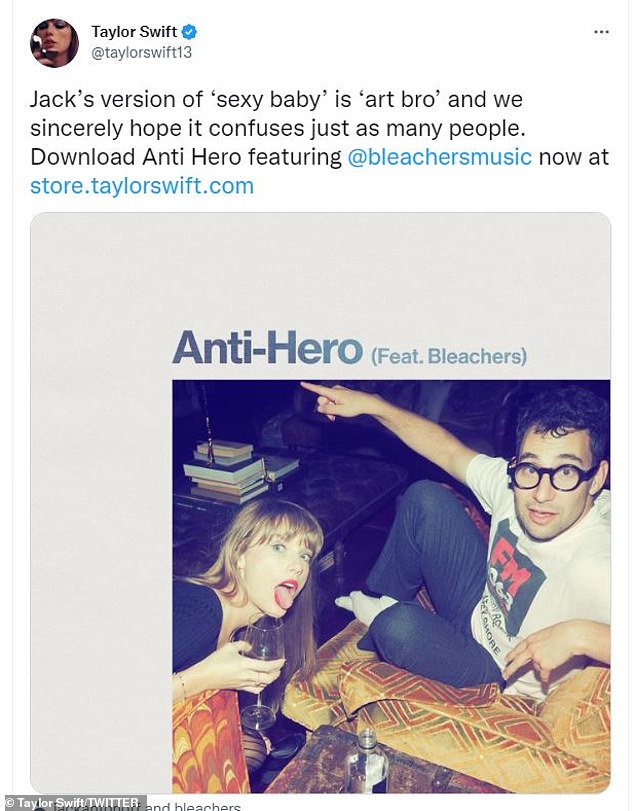 His take: The pop superstar kicked off the Anti-Hero remix frenzy with a version featuring the Bleachers, which is Antonoff’s band based out of New Jersey

The pop superstar kicked off the Anti-Hero remix frenzy with a version featuring the Bleachers, which is Antonoff’s band based out of New Jersey.

‘Jack’s version of “sexy baby” is “art bro” and we sincerely hope it confuses just as many people. Download Anti Hero featuring @bleachersmusic now at store.taylorswift.com,’ she said of the remix on Monday.

Anti-Hero broke the global and US records for the biggest opening-day streams for a song in Spotify history. It also reached the top 10 of the official charts in 38 territories, peaking at number one in Australia, Canada, Indonesia, Ireland, Israel, Malaysia, New Zealand, the Philippines, Portugal, Singapore, the UK and the U.S.

By topping the chart in the U.S. Swift now has nine songs to hit number one on the Billboard Hot 100, and she’s now the only soloist ever to debut ten songs atop the chart. 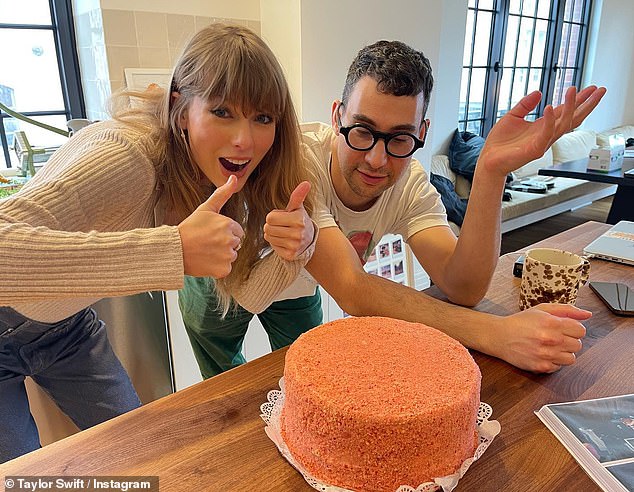 Collaborator: Midnights, which dropped October 21, was written and produced by Swift with Antonoff, her longtime collaborator, whose work with the songstress dates back to when they wrote Sweeter Than Fiction for the film One Chance (2013) 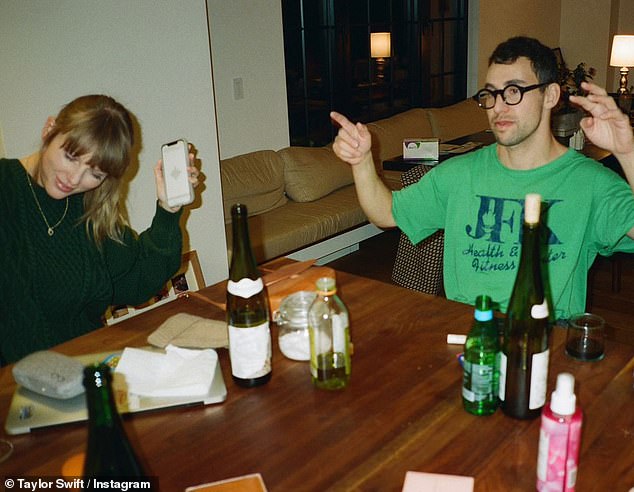 Midnights, which dropped on October 21, has also topped the charts in 25 territories, including the U.S., adding to her total of 11 number one albums on the Billboard 200 during her storied career.

Ahead of the release, the 11-time Grammy winner called Midnights as a concept album about nocturnal contemplation, describing it as a ‘journey through terrors and sweet dreams’, inspired by ’13 sleepless nights’ of her life.

The record was written and produced by Swift with Antonoff, whose work with the songstress dates back to when they wrote Sweeter Than Fiction for the film One Chance (2013).

Her incredible output of writing and recording in recent years has resulted in her dropping four new albums of original material since August 2019, starting with the release of Lover. 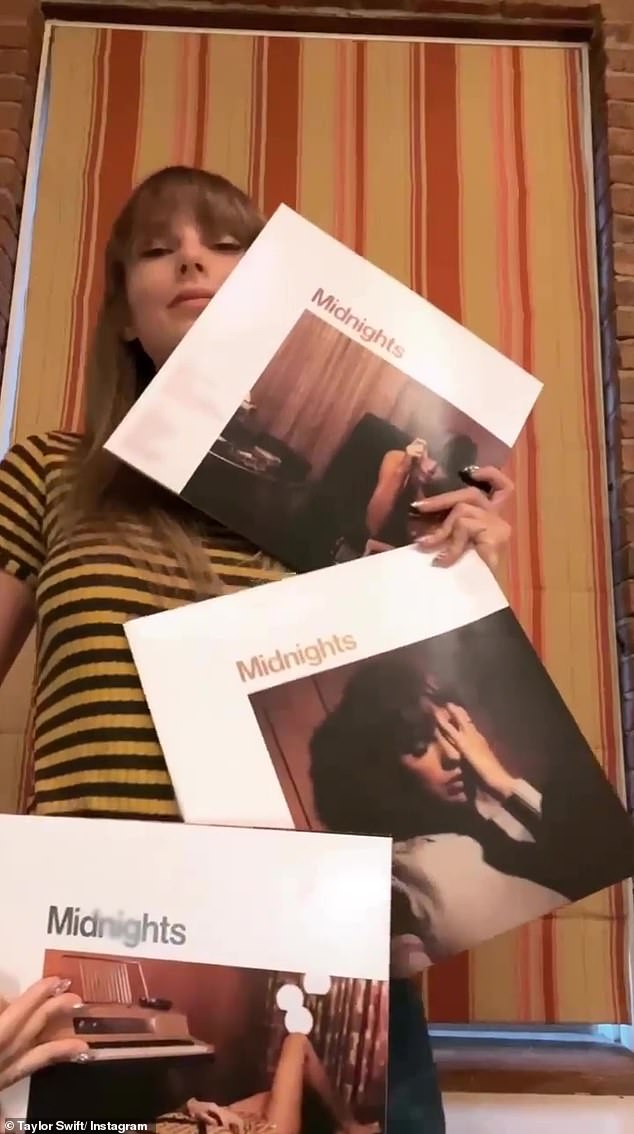 Chart-topper: Both Anti-Hero and the album Midnights hit number one across the world, including the U.S.; the pop superstar released four different album covers for the vinyl editions