Taxes could have to soar by £60BILLION – 7p for every pound earned – to avoid a new wave of austerity after Covid crisis, IFS think-tank warns

Taxes could have to soar by £60billion to avoid a new wave of austerity after the coronavirus crisis, experts warned today.

The respected IFS think-tank said an income tax rise of 6p or 7p for every £1 earned could be needed to cover extra public spending over the next five or six years.

It also urged ministers to ditch any plans for setting out a multi-year spending review due to the unprecedented uncertainties facing the economy.

Instead Chancellor Rishi Sunak should set a one-year plan and focus on working out how much more the government will need to lay out dealing with Covid in the future.

The new report by the IFS looked at how much money has been spent and what options are open to the Government.

It found that spending has increased 20 per cent above the Government’s original plans before the pandemic.

The majority of the extra spending has been on the Department of Health and Social Care, with £15billion spent on PPE and £12billion on rolling out the Test and Trace programme.

The IFS said budgets could be cut on building new railways, roads and infrastructure, although this would fly in the face of the Conservative Party manifesto of ‘levelling up’ the north of England.

But Ben Zaranko, a research economist at IFS and the author of the research, said those numbers are now redundant.

He explained: ‘The immense economic uncertainty associated with the Covid-19 pandemic, and the looming end of the Brexit transition period, make this an extraordinarily difficult time for the Chancellor to be formulating public spending plans.

‘Covid-19 has blown previous spending plans out of the water, with more than £70billion allocated to departments this year for day-to-day spending as part of the response to the virus.

‘If some of these spending programmes, such as the running costs of NHS Test and Trace, are to be unfortunate facts of life for years to come, they could swallow up huge amounts of money, and leave some public services facing another round of budget cuts for their core services.

‘Avoiding that scenario would require the Chancellor to find billions of extra funding, paid for at some point through higher taxes.’

The rises would be needed and the IFS predicts public spending as a percentage of national income could rise from 39.8 per cent at present to 41 per cent by 2025, adding around £60 billion to the public spending bill, it said.

That would equate to around 6p or 7p on every pound earned in extra income tax although it could depend on whether it is added to the higher tax band or elsewhere.

Economists have also argued that any tax rises should be through either income tax, national insurance or VAT changes, as they produce the biggest results.

Mr Sunak has signalled that tax rises will be needed, but the Budget due in the Autumn has been delayed amid fears that coronavirus is surging again. 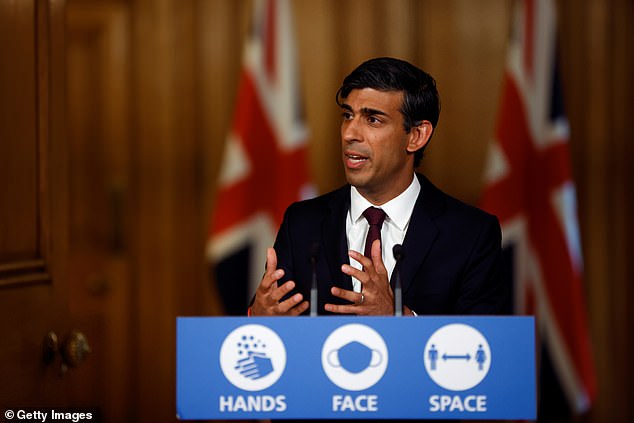 Mr Sunak (pictured at a press conference last week) has signalled that tax rises will be needed, but the Budget due in the Autumn has been delayed amid fears that coronavirus is surging again

Many Tory MPs have called for the debt built up during the pandemic to be treated like ‘war debt’ and allowed to dissipate over decades – although the deficit would still need to be closed for that to work.

‘It is entirely inappropriate for the Chancellor to consider raising taxes this year or next, or possibly even the year after,’ he said.

‘The longer term answer is clearly, if we have a bigger state we will need more tax and, if we think the state is going to be 2 per cent to 3 per cent bigger than we’re spending, then that’s probably the magnitude you would have to raise taxes, and that’s a lot.’

A Treasury spokesperson said: ‘The Spending Review will proceed this Autumn, as planned. The Chancellor has already confirmed that departmental spending will increase above inflation – both for day-to-day spending and longer-term investment.’