A fed-up horse-and-cart driver has threatened to beat notorious vegan activist Tash Peterson ‘to death with her camera’ in a tense confrontation.

Ms Peterson, 28, berated the driver in Melbourne and slammed the practice of using horses to pull carts as ‘barbaric’, ‘animal slavery’ and ‘animal abuse’ – as she protested with her boyfriend Jack Higgs.

Taking exception to the Onlyfans star’s comments, the driver let loose on the irate herbivores, who recently moved east from Perth vowing to disrupt supermarkets, steakhouses and the lives of meat eaters in the city. 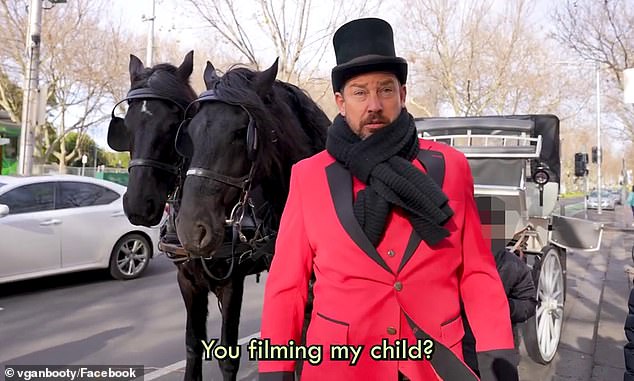 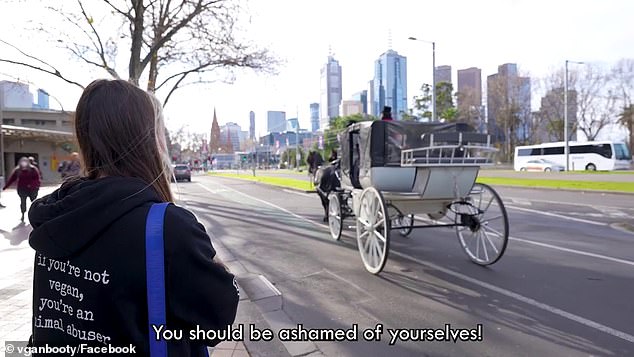 In the clip, she confronts a driver claiming the practice of using horses to pull carts is ‘barbaric’, ‘animal slavery’ and ‘animal abuse’

‘I hope you are not filming my child?’ the horse-and-cart driver in a top hat and red coat says.

‘If you do I’ll beat you to death with your camera.’

Ms Peterson denies filming his children, telling him: ‘We are filming animal slavery and exploitation.’

‘How can you defend this? Can you not see how sad and depressed they are? These animals should be free.’

She then continues to shout at the cart as it’s pulled away by the Clydesdales.

‘Animal abusers, total losers! You should be ashamed of yourself!’ 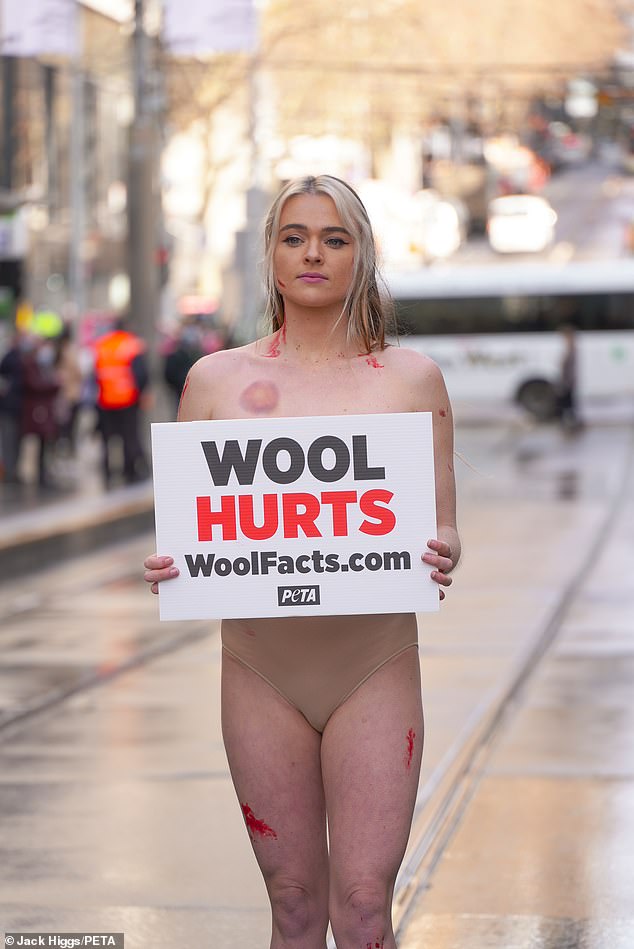 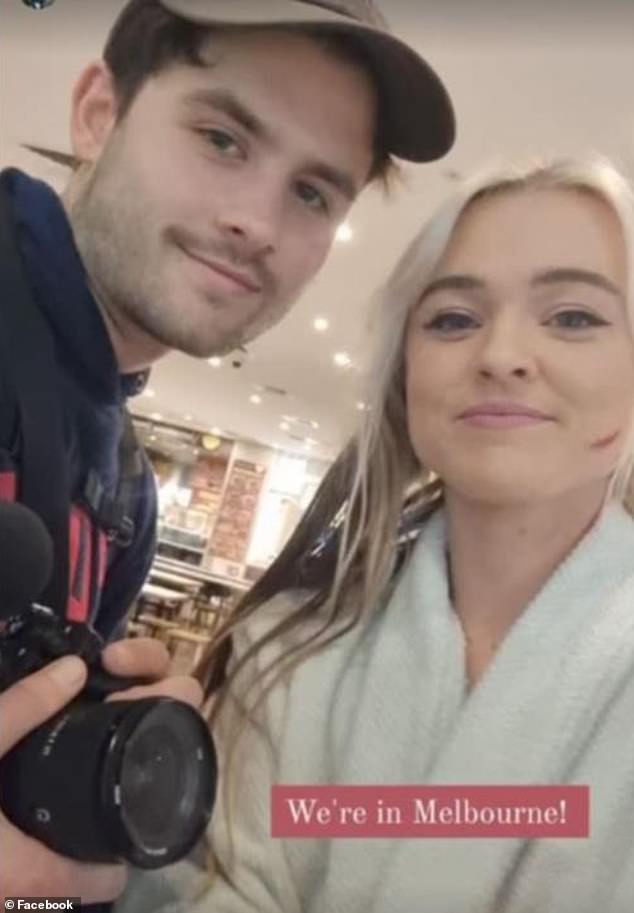 The vegan activist (pictured with her partner, Jack Higgs) took to social media as soon as she landed in Melbourne

Within hours of arriving in Melbourne, she staged her first protest last Wednesday, posing topless in Melbourne’s CBD, while holding a sign that read ‘wool hurts’.

Ms Peterson has made a name for herself carrying out disruptive protests in the name of animal rights.

‘I’ll definitely hit up a steakhouse and some supermarkets,’ she told the Herald Sun of her future plans.

‘I’ll take my activism to the next level as time goes by and I’m willing to break the law if it’s going to bring more attention to my message, so there might be a bit of law-breaking in future.’

Last Wednesday, she held a demonstration against the wool industry in Melbourne’s CBD. 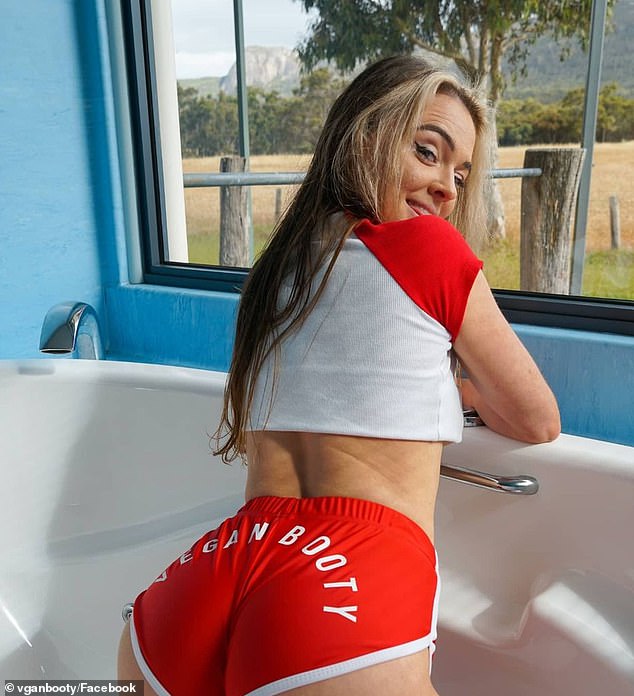 The activist was pictured wearing a white bathrobe and had red marks on her face as part of her costume to raise awareness for the ‘sheep that are exploited and murdered in the wool industry’.

Later that day, she was seen with two other women, all topless, with signs condemning the use of wool in Melbourne’s main shopping precinct.

Ms Peterson said that Melburnians are ‘more responsive’ to her message compared to Western Australia, where she was been met with more hostility.

She claimed she has no fear or concern about ‘haters’ or criticism as she carries out her activism.

‘I measure my own success by the amount of haters that I have, because it just shows I’m reaching the right audience. People aren’t going to change immediately.’ 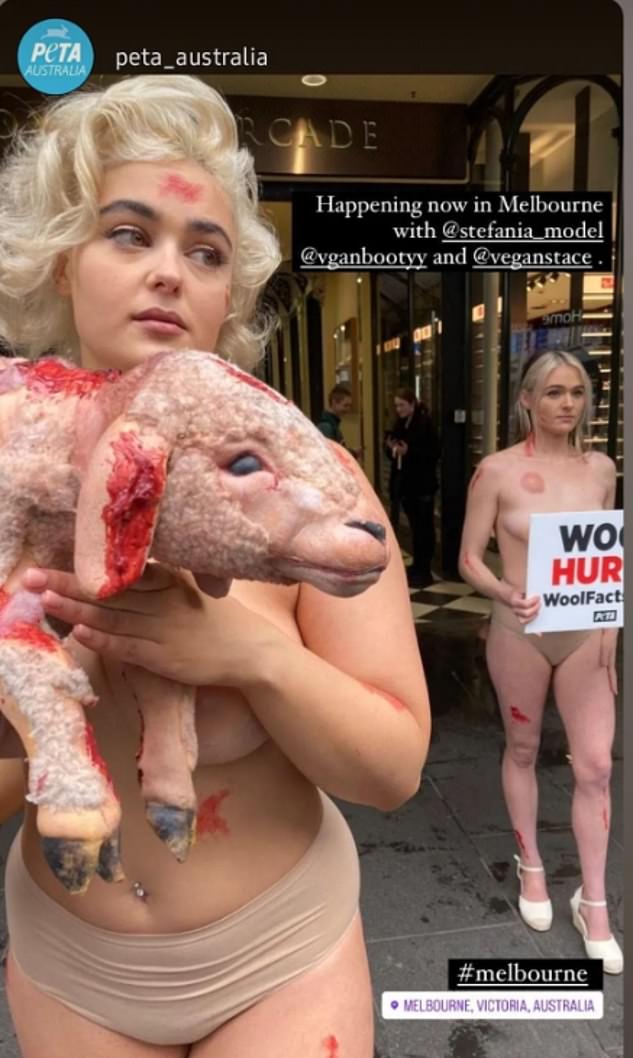 She said she has ‘no hatred or anger towards any non-vegans’ or those who work in the meat industry, but stressed that ‘murder has been normalised’ as people sell and consume meat.

Ms Peterson’s antics have led police and politicians in WA to describe her as ‘Australia’s biggest pest’.

She has copped several fines for her nude demonstrations in designer stores, restaurants and supermarkets.

In May, she accused a police officer of sexism after he asked her to cover her bare chest during one of her public protests.

In the video, the plant-based protester held a sign that read: ‘Kangaroos shot and joeys beaten to death for Nike shoes,’ while wearing a kangaroo onesie tied around her waist.