The Tamil mum who recently returned to Australia after four years in detention has revealed she begged an officer to let place her young daughter on her breast for comfort as they were swooped on by dozens of AFP officials – but was refused.

At 5am on March 4, 2018, the Nadesalingam family – mum Priya, dad Nades and daughters Tharnicaa and Kopika – heard a loud knock on their door in Biloela, Queensland, where they’d lived since 2014.

Nades opened it and was shocked to see what he said were around 50 officers from Australian Border Force, police and private security company Serco.

Before they knew it, and with no time to pack, they were in two separate vehicles – Priya and the children in one, Nades in another – with no idea where they were going.

Priya was kept in the back, jammed between officers, while the children were up front, crying and desperate for their mum.

‘I was still breastfeeding Tharnicaa and I asked the officers if I could put her on my breast to comfort her,’ Priya told Australian Women’s Weekly.

Tharnicaa Nadesalingam (centre) celebrates her fifth birthday with her parents Priya and Nades Nadesalingam and her sister Kopika in Biloela, Queensland, Sunday, June 12, 2022

Despite her pleading, they refused. ‘I said, “What wrong have I done to deserve this? Are you human? Do you have children?”‘

Priya said a female officer told her that this was, ‘not something for you to ask’ and that baby Tharnicaa would eventually go to sleep.

But she did not. She was hysterical for the whole 90 minute journey to what turned out to be Gladstone Airport.

‘Even today, the question in my mind is, “Why were we treated this way?” said Priya. ‘I still have no answer. Why did they need so many security people? Why did they separate us from our children?’

What followed for the family was four years of a bureaucratic nightmare that saw them first moved to the Melbourne Immigration Transit Accommodation and then two years as the sole residents at the Christmas Island detention centre.

‘At least what happened to me in Sri Lanka happened in a war. Here in Australia there is no war. This was like a silent war,’ said Priya.

Before being held on Christmas Island they were twice almost deported to Sri Lanka, from where Nades and Priya separately came to Australia by boat, seeking asylum due to the terrible situation for Tamils after the country’s 26-year-long civil war. 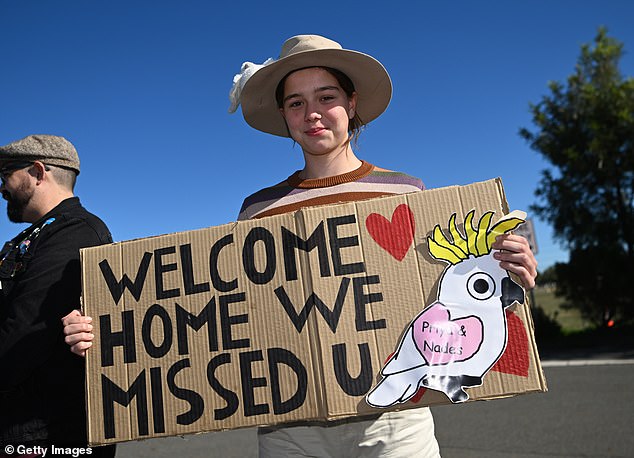 Isabelle Kelleher, a supporter of the Nadesalingam family, holds a welcome sign before their arrival at the Thangool Aerodrome on June 10, 2022 near Biloela, Australia 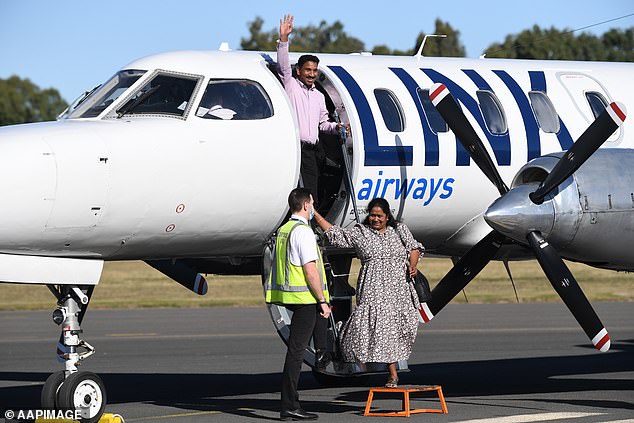 They were saved from deportation both times through last-minute injunctions from their lawyers when the departing plane was already in the air.

Locals in Biloela also took up the family’s cause, and made sure everybody knew about it.

The campaign was led by two social workers, Bronwyn Dendle and Angela Fredericks.

They rallied other locals, set up a change.org petition (which has almost 600,000 signatures), contacted the media, crowdfunded, established the #HomeToBilo movement and kept going as Australians took the family into their hearts. 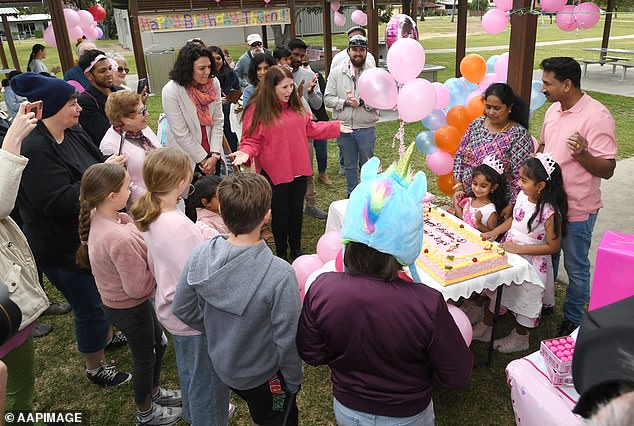 ‘Bilo is a very traditional Queensland country town,’ said Angela. ‘It’s conservative, it votes National … But it’s also a really multicultural community and we have that small town thing where we stick up for each other.’

In May 2021, on Christmas Island, Tharnicaa contracted pneumonia and blood poisoning. It took two week for authorities to acknowledge she needed to be taken to Perth, 2,600km away, for treatment.

In Perth, Tharnicaa recovered and the family’s wait continued until the point where is looked like Labor winning power in last month’s election was their best chance of getting back to Biloela.

Peter Dutton had repeatedly said that they were not genuine refugees and had referred to Kopika and Tharnicaa as ‘anchor babies’, as if they had been had just so the family could stay in Australia. 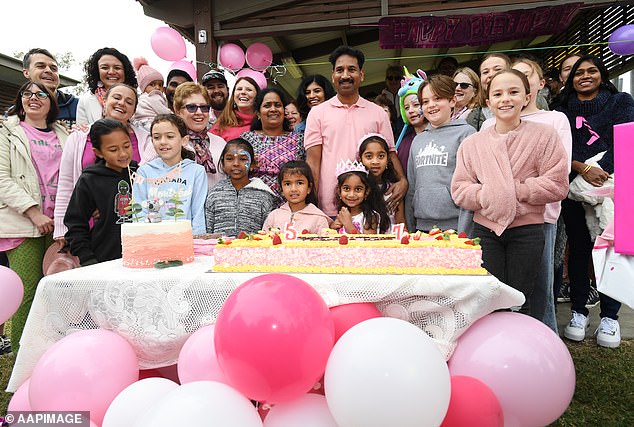 ‘Oh my God, everyone’s just got the biggest grins on their faces,’ said social worker and Biloela local Angela Fredericks

When the election result was confirmed on Saturday night, May 21, Ms Fredericks called Priya from Biloela. Nades, who works as a cook six days a week, was at work.

Priya burst into tears and her daughters comforted her, assuming this was more bad news. Angela told them their mum’s tears were were tears of joy.

Nades and Priya, who are both 45, Tharnicaa, 5 and Kopika, 7, are now back home in Biloela, six-and-a-half hour north-west of Brisbane.

After being detained for four years arrived back in Bilo just in time to celebrate Tharnicaa’s fifth birthday with the locals who never gave up on them. 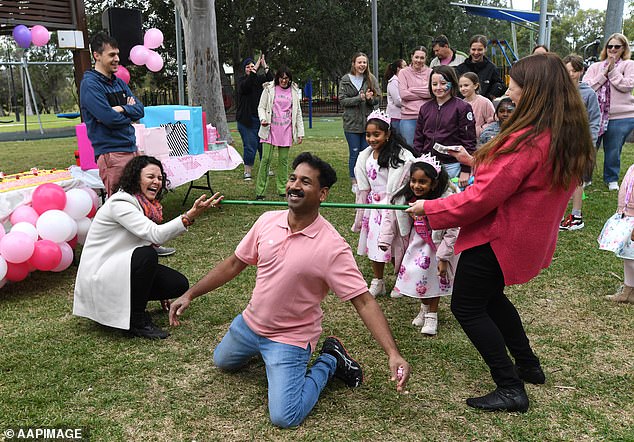 Balloons, cake and overwhelming joy set the tone as locals gathered at a nearby park in the Queensland outback town on Sunday (pictured, Tharni’s father Nades Nadesalingam)

She was surrounded by balloons and cake as locals sang ‘Happy Birthday’ to her in a park in Biloela last Sunday.

‘Oh my God, everyone’s just got the biggest grins on their faces,’ said Ms Fredericks.

‘When the family arrived and they walked down, the girls had little tiaras on and the birthday girl had a sash and they wore pretty pink dresses.

‘I think for a lot of us, that’s when it hit that this is what we’ve been fighting for, for them to be able to walk to their local park here, you know have the stereotypical birthday in the park, which we do here.

‘So this is why we did this. This is what we’re fighting for.’