EXPRESS INFORMER > News & Politics > TALK OF THE TOWN: Sienna Miller stops for coffee in London while sporting a pair of baggy jeans

TALK OF THE TOWN: Hollywood star Sienna Miller stops for coffee in London while sporting an ultra-fashionable pair of baggy jeans – and not wearing her engagement ring

She has turned herself into a bona fide Hollywood star and has a swanky home in New York, so I was rather surprised to see Sienna Miller slumming it in London, sporting an ultra-fashionable pair of high-waisted baggy jeans, visiting an ordinary cafe – and not wearing her engagement ring.

Sienna, who had major roles in American Sniper and The Loudest Voice, stopped for coffee at a table outside a cafe in London with her mum Jo, sister Savannah and her ex, Tom Sturridge.

Is Sienna, 38, maybe a secret Madness fan? That might explain the baggy trousers, which she paired with a £450 yellow Frame Les Second Tote handbag.

She was pictured without her engagement ring, following reports in the US of a split from her toy boy fiance of nine months, Lucas Zwirner. She is said to have called off her engagement to Lucas, son of art dealer David Zwirner, a few weeks ago. The couple were first pictured together at the Met Gala in May 2019, and Lucas, 29, popped the question in January.

At least she had a shoulder to cry on in Tom, dad of her daughter Marlowe, eight. 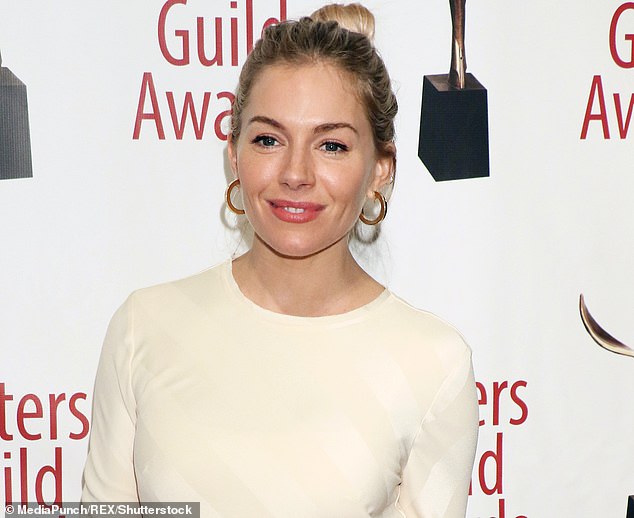 Sienna, 38, pictured at the 72nd Annual Writers Guild Awards at Edison Ballroom in New York, where she has a swanky home, in February this year

My lips are sealed, but…

Which mega-rich family of ‘creatives’ is advertising for a French-speaking nanny/cook who can iron and walk two small dogs?

You won’t have to start until noon each day, will be paid £50,000 a year and will be provided with accommodation at the family’s Marylebone mansion.

Duties involve looking after the family’s baby daughter – and perks include holidays at their villa in Europe. Time to brush up on my Franglais!