Mullah Abdul Ghani Baradar, one of the co-founders of the Taliban, was freed from jail in Pakistan three years ago at the request of the U.S. government.

Just nine months ago, he posed for pictures with Donald Trump’s Secretary of State Mike Pompeo to sign a peace deal in Doha which today lies in tatters.

Last month, his forces seized Kabul and he is now tipped to become Afghanistan’s next leader in a reversal of fortune which humiliates Washington.

While Haibatullah Akhundzada is the Taliban’s overall leader, Baradar is head of its political office and one of the most recognisable faces of the chiefs who have been involved in peace talks in Qatar.

In September 2020, Baradar was pictured with Secretary of State Mike Pompeo who ‘urged the Taliban to seize this opportunity to forge a political settlement and reach a comprehensive and permanent ceasefire,’ the US said in a statement

The 53-year-old was deputy leader under ex-chief Mullah Mohammed Omar, whose support for Al-Qaeda leader Osama bin Laden led to the US-led invasion of Afghanistan after 9/11.

Baradar is reported to have flown immediately from Doha to Kabul on Sunday evening as the militants were storming the presidential palace.

Born in Uruzgan province in 1968, Baradar was raised in Kandahar, the birthplace of the Taliban movement.

He fought with the mujahideen against the Soviets in the 1980s until they were driven out in 1989.

Afterwards, Afghanistan was gripped by a blood civil war between rival warlords and Baradar set up an Islamic school in Kandahar with his former commander Mohammed Omar.

The two mullahs helped to found the Taliban movement, an ideology which embraced hardline orthodoxy and strived for the creation of an Islamic Emirate.

Fuelled by zealotry, hatred of greedy warlords and with financial backing from Pakistan’s secret services, the Taliban seized power in 1996 after conquering provincial capitals before marching on Kabul, just as they have in recent months.

Baradar had a number of different roles during the Taliban’s five-year reign and was the deputy defence minister when the US invaded in 2001.

He went into hiding but remained active in the Taliban’s leadership in exile.

In 2010, the CIA tracked him down to the Pakistani city of Karachi and in February of that year the Pakistani intelligence service (ISI) arrested him.

But in 2018, he was released at the request of the Trump administration as part of their ongoing negotiations with the Taliban in Qatar, on the understanding that he could help broker peace.

In February 2020, Baradar signed the Doha Agreement in which the U.S. pledged to leave Afghanistan on the basis that the Taliban would enter into a power-sharing arrangement with President Ashraf Ghani’s government in Kabul.

He was pictured in September with Secretary of State Mike Pompeo who ‘urged the Taliban to seize this opportunity to forge a political settlement and reach a comprehensive and permanent ceasefire,’ the US said in a statement.

Pompeo ‘welcomed Afghan leadership and ownership of the effort to end 40 years of war and ensure that Afghanistan is not a threat to the United States or its allies.’

The Doha deal was heralded as a momentous peace declaration but has been proved to be nothing but a ploy by the Taliban.

The jihadists waited until thousands of American troops had left before launching a major offensive to recapture the country, undoing two decades of work by the US-led coalition.

Haibatullah Akhundzada, the future Emir of Afghanistan and the Taliban’s Islamic figurehead

Haibatullah Akhundzada, the ‘Leader of the Faithful,’ is the Taliban’s Supreme Commander with the final word on its political, religious and military policy.

Akhundzada is expected to take the title of Emir of Afghanistan.

Believed to be around 60-years-old, he is not known for his military strategy but is revered as an Islamic scholar and rules the Taliban by that right.

He took over in 2016 when the group’s former chief, Akhtar Mansour, was killed in a US drone strike on the Pakistani border.

After being appointed leader, Akhundzada secured a pledge of loyalty from Al Qaeda chief Ayman al-Zawahiri, who showered the religious scholar with praise – calling him ‘the emir of the faithful’.

This helped to seal his jihadi credentials with the group’s long-time allies. 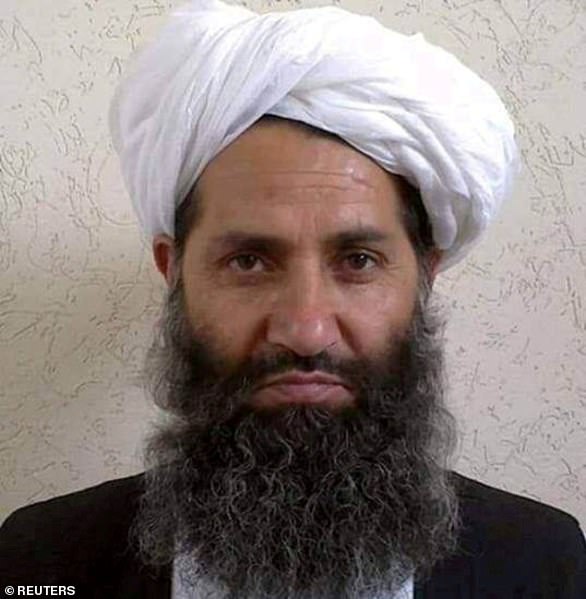 Akhundzada was tasked with the enormous challenge of unifying a militant movement that briefly fractured during a bitter power struggle following the assassination of his predecessor, and the revelation that the leadership had hid the death of Taliban founder Mullah Omar for years.

The leader’s public profile has been largely limited to the release of annual messages during Islamic holidays.

Akhundzada was born around 1959 to a religious scholar in the Panjwayi district of Kandahar Province.

His family were forced to flee their home during the Soviet invasion and he joined the resistance as a young man.

He was one of the first new Taliban recruits in the 1990s and immediately impressed his superiors with his knowledge of Islamic law.

When the Taliban captured Afghanistan’s western Farah province, he was put in charge of fighting crime in the area.

As the Taliban seized more of the country, Akhunzad became head of the military court and deputy chief of its supreme court.

After the US invasion in 2001 he became head of the Taliban’s council of religious scholars and is believed to be the author of many of its fatwas (Islamic legal rulings), including public executions of murderer and adulterers and cutting the hands off thieves.

Before being named the new leader he had been preaching and teaching for around 15 years at a mosque in Kuchlak, a town in southwestern Pakistan, sources told Reuters.

Sirajuddin Haqqani, the son of the famed commander from the anti-Soviet jihad

Sirajuddin doubles as both the deputy leader of the Taliban movement while also heading the powerful Haqqani network.

The Haqqani Network is a US-designated terror group that has long been viewed as one of the most dangerous factions fighting Afghan and US-led NATO forces in Afghanistan during the past two decades.

The group is infamous for its use of suicide bombers and is believed to have orchestrated some of the most high-profile attacks in Kabul over the years. 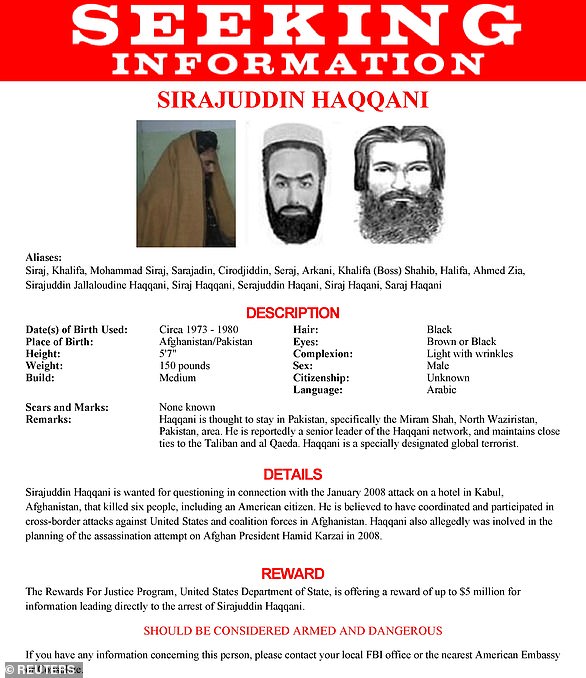 An FBI wanted poster for Sirajuddin Haqqani, the son of the famed commander from the anti-Soviet jihad

The network has also been accused of assassinating top Afghan officials and holding kidnapped Western citizens for ransom – including US soldier Bowe Bergdahl, released in 2014.

Known for their independence, fighting acumen, and savvy business dealings, the Haqqanis are believed to oversee operations in the rugged mountains of eastern Afghanistan, while holding considerable sway over the Taliban’s leadership council.

Mullah Yaqoob, the son of the Taliban’s founder

The son of the Taliban’s founder Mullah Omar.

Mullah Yaqoob heads the group’s powerful military commission, which oversees a vast network of field commanders charged with executing the insurgency’s strategic operations in the war.

His lineage and ties to his father – who enjoyed a cult-like status as the Taliban’s leader – serves as a potent symbol and makes him a unifying figure over a sprawling movement.

However speculation remains rife about Yaqoob’s exact role within the movement, with some analysts arguing that his appointment to the role in 2020 was merely cosmetic.