Australia Day should be the day the country comes together in celebration – but on Wednesday, it was a nation divided by pride and prejudice.

While millions of proud Aussies hit the coast and had fun in the sun with traditional BBQs and backyard cricket, others took to the streets demanding the day be axed.

Beaches up and down the country were filled with happy flag-waving Aussies as millions embraced the spirit of Australia Day in the brilliant summer sunshine.

Hundreds more pledged their allegiance to the Southern Cross as they became new citizens at emotional and unforgettable Australia Day citizenship ceremonies.

But while some Aussies chose to celebrate in the sun, others protested over the apparent prejudice of the date itself.

Australia Day should be the day the country comes together in celebration – but on Wednesday, it was a nation divided by pride and prejudice. 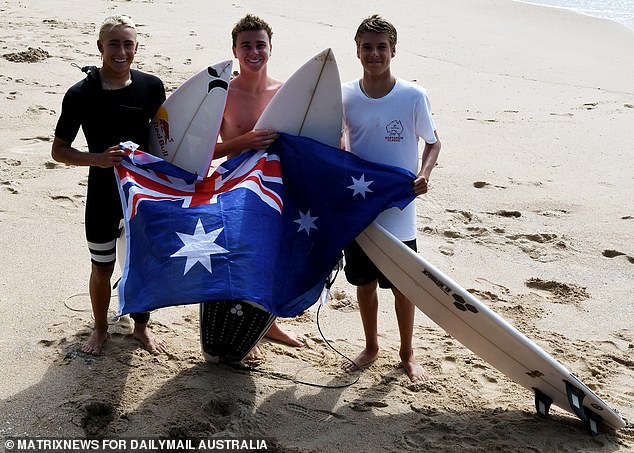 While millions of proud Aussies hit the coast and had fun in the sun with traditional BBQs and backyard cricket, others took to the streets demanding the day be axed.

The traditional celebration of the arrival of the First Fleet in 1786 was marked by a sensational aerobatics display by the RAAF’s newest fighter, the F35A Lightning II, which lit up the skies over Sydney.

The RAAF stepped in with the deafening but spectacular airshow after Qantas and other airlines declined to do the traditional city centre flyover.

Instead the crowds were treated to the breathtaking display by the RAAF which said it was ‘proud to participate in Australia Day 2022 events’.

A statement added: ‘Australia Day is held annually on January 26 to reflect on our nation’s past and celebrate the Australian spirit, mateship and sense of community.’ 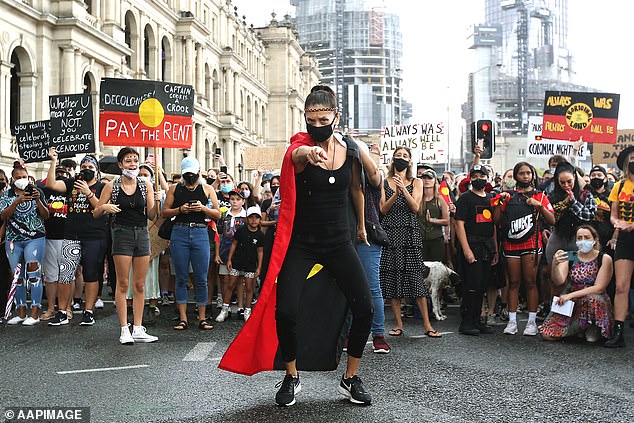 Once the rain stopped in Brisbane, activists danced in the street during the Invasion Day rally 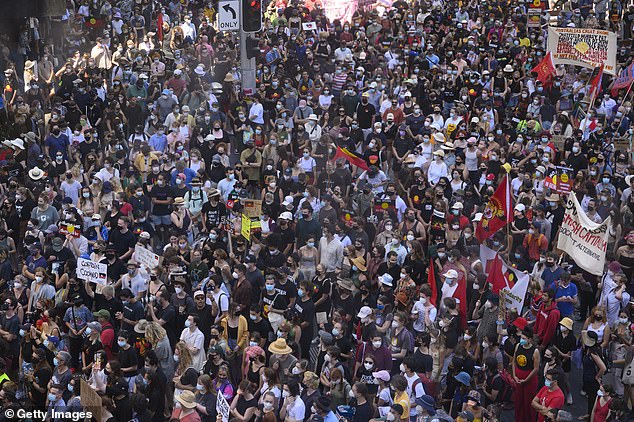 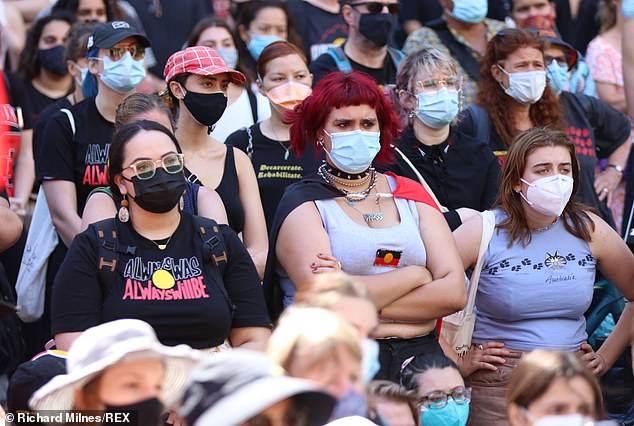 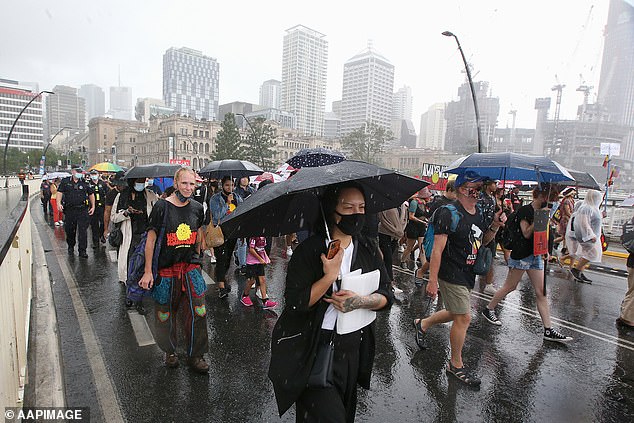 In Brisbane, rain failed to dampen the spirits of those who attended the Invasion Day rally

Elsewhere though thousands of grim-faced demonstrators gathered in capital cities across Australia to march through the streets calling for Australia Day to be ditched.

Sydney’s CBD was brimming with thousands of activists, while plenty of protestors ignored rain in Brisbane to attend an Invasion Day rally.

A speaker at the rally in the Harbour City told the passionate crowd now was the opportune time to change the date of Australia Day from January 26.

‘Today’s a national holiday where you’re told to go and have a bbq and a beer…. to celebrate our genocide,’ she said. 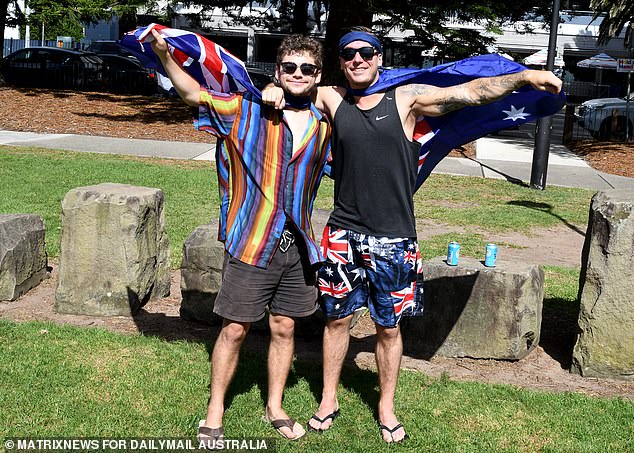 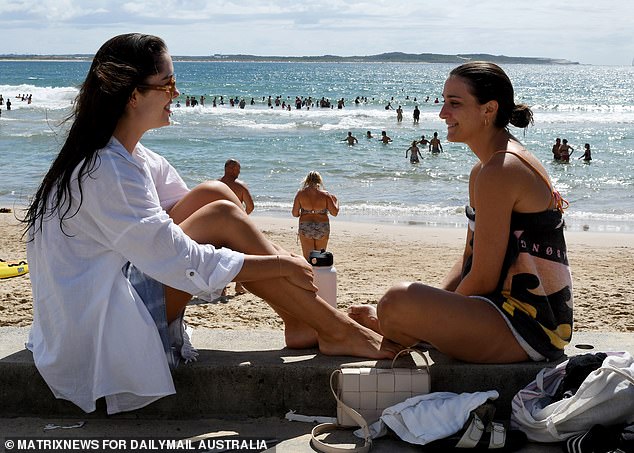 Hundreds more pledged their allegiance to the Southern Cross as they became new citizens at emotional and unforgettable Australia Day citizenship ceremonies (pictured, Australia Day beachgoers at Cronulla in Sydney) 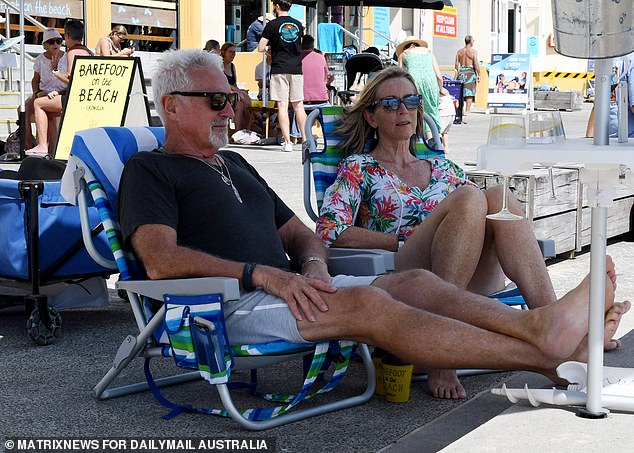 Aussies of every age enjoyed  the chance to celebrate Australia’s history (pictured, a couple relax by the beachside at Cronulla in Sydney) 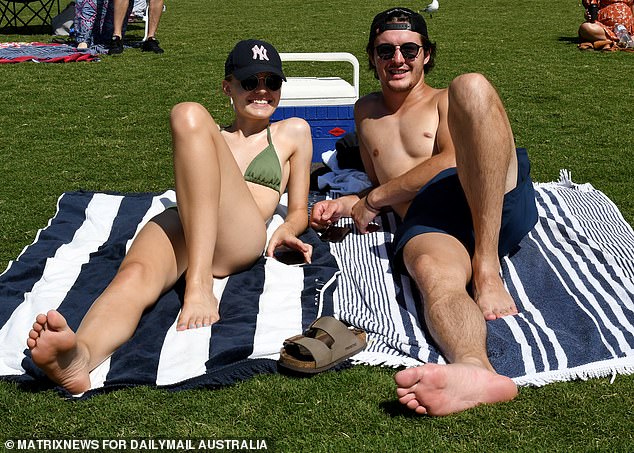 Qantas declined to do their traditional city centre Sydney flyover for Australia but instead the crowds on the ground got to enjoy a spectacular display by the RAAF’s new F35A Lightning II (pictured, a couple enjoy Australia Day in Sydney)

‘I pay my respects to all First Nations here, to all of us feeling proud to be here today but yet sad in knowing why we have to stand here.

‘Why do we have to promote our invasion to make sure Australia sees us, to make sure our murders stop, the raping of our women, the stealing of our children, the poisoning of our land and rivers, the denunciation of our languages. It’s disgusting.’

There were similar scenes in Brisbane, where activists ignored morning rain to march in large numbers in and around the CBD.

The passionate protests came as Prime Minister Scott Morrison and other dignitaries gathered in Canberra for an Australia Day citizenship and flag-raising ceremony on Wednesday morning. 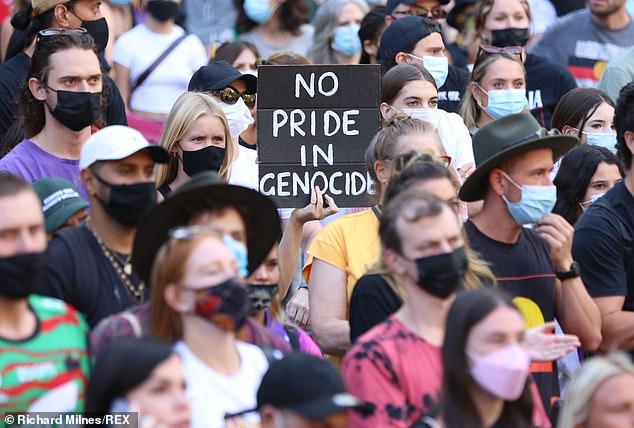 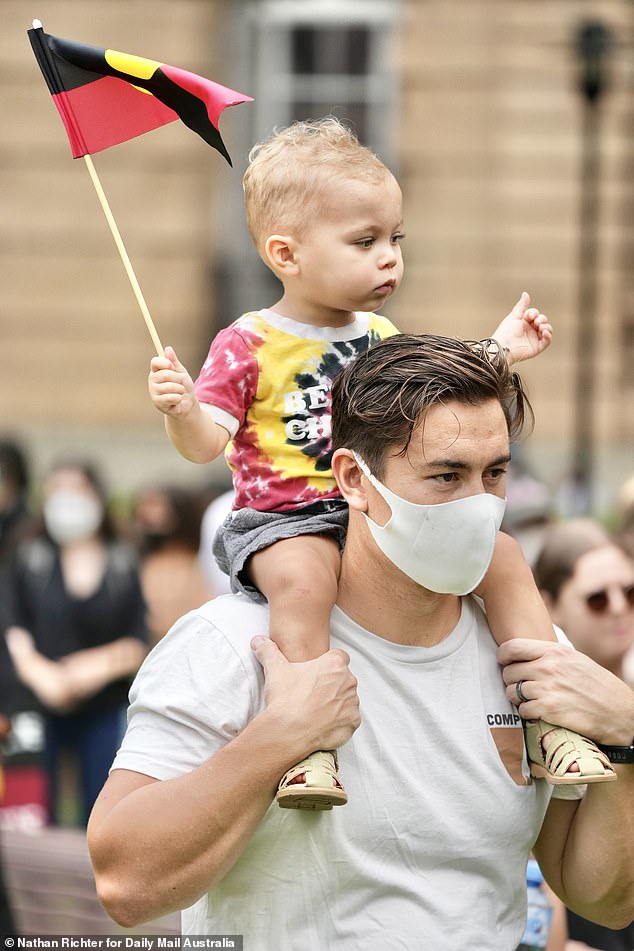 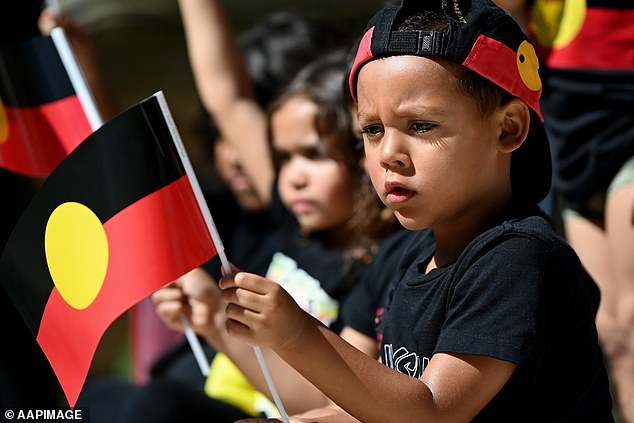 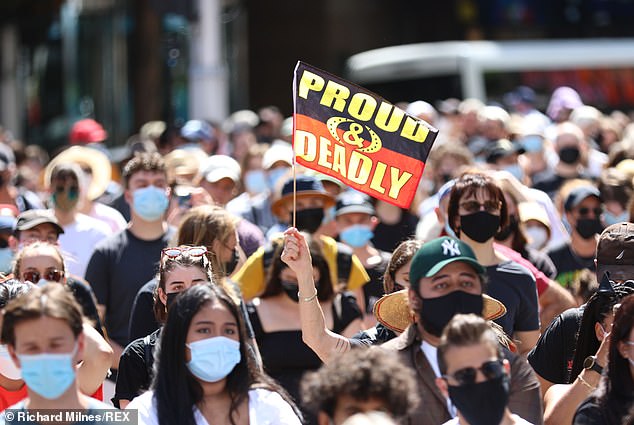 Protestors were out in force in Sydney on Wednesday (pictured) Australia Day is not a time of celebration for Aboriginal residents across the nation, who often refer to it as Invasion Day 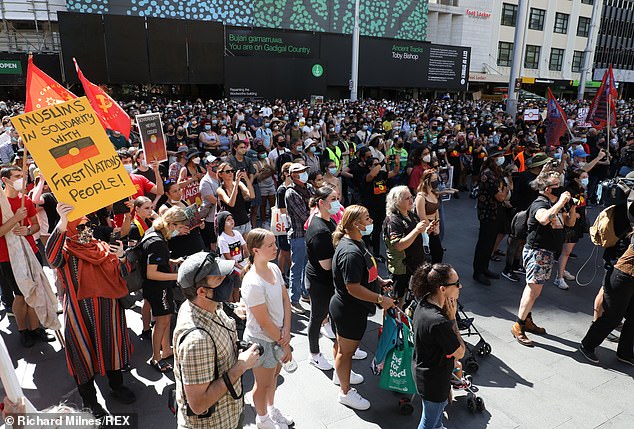 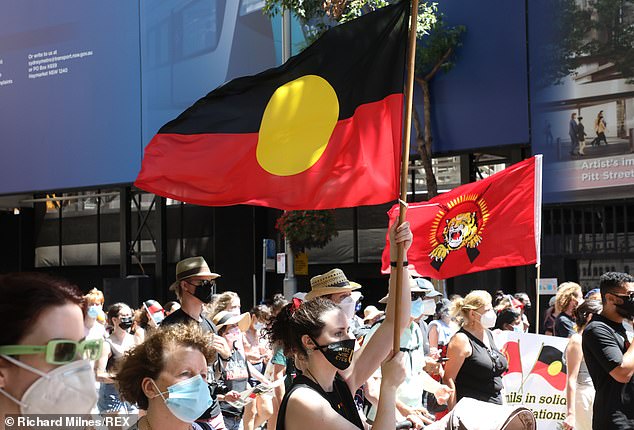 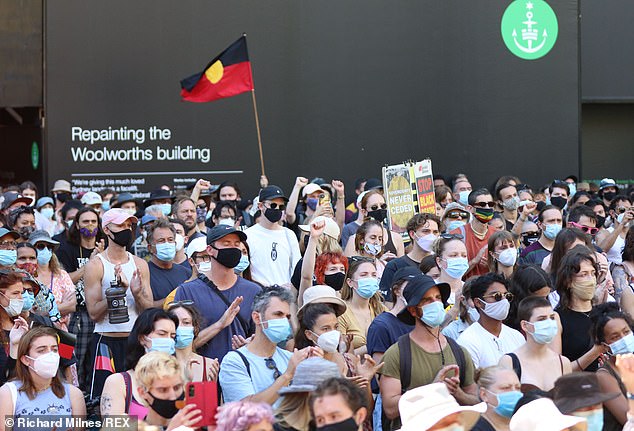 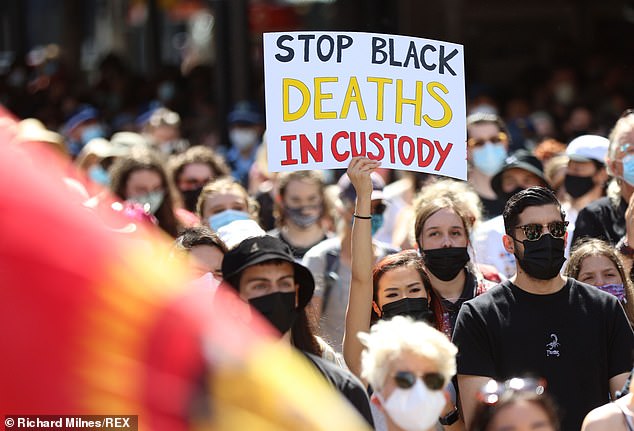 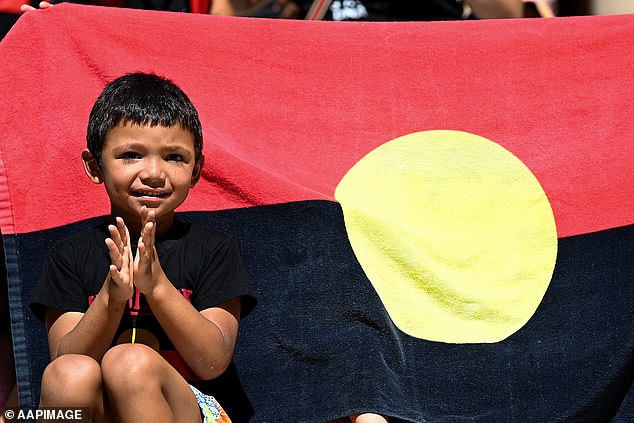 At the same time, a large number of Indigenous people dressed in traditional garb conducted a ceremony at nearby Garema Place in the nation’s capital before a minute’s silence was held for ‘the warriors before us’.

Stalls and speech tents were also set up at the tent embassy, situated near Old Parliament House.

Speaking after the citizenship ceremony, federal Labor Leader Anthony Albanese said it was important to recognise Australia’s history went back at least 60,000 years.

‘Which is why one of my priorities will be to recognise First Nations people in Australia’s constitution,’ he told reporters.

‘We should be very proud that we are home to the oldest continuous civilisation on the planet.’

In Melbourne, a statue of Captain James Cook was smeared with red paint overnight by protestors. 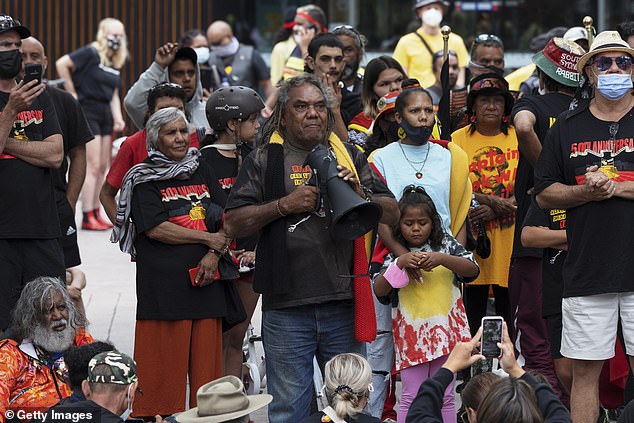 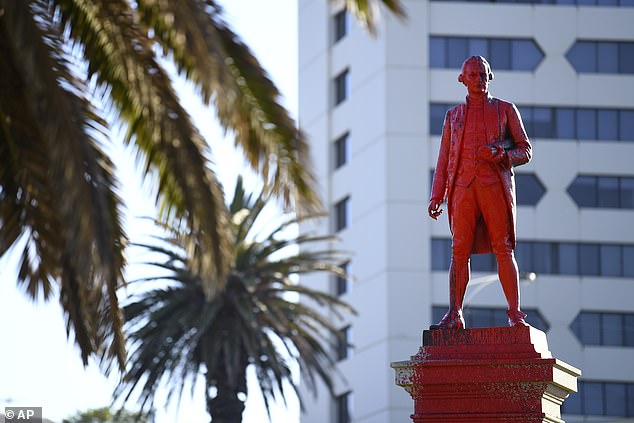 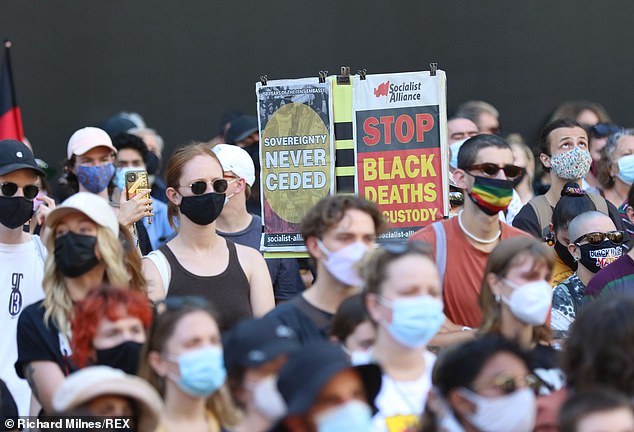 ‘Whilst we understand people have certain views about this day, we always ask people to be respectful and blatant criminal activity like that will not be tolerated,’ Assistant Commissioner Glenn Weir told the Today Show.

It isn’t the first time the statue has been targeted. In 2018, vandals wrote ‘no pride in genocide’ on the statue and poured pink paint over Cook’s head.

The move led to the dispossession of Indigenous peoples from the land they had inhabited for thousands of years before the arrival of the First Fleet. 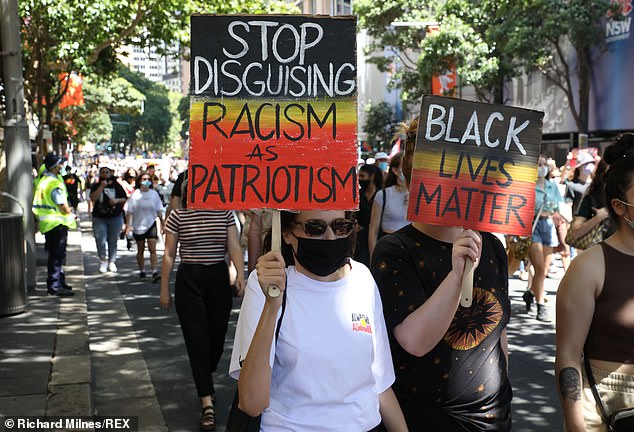 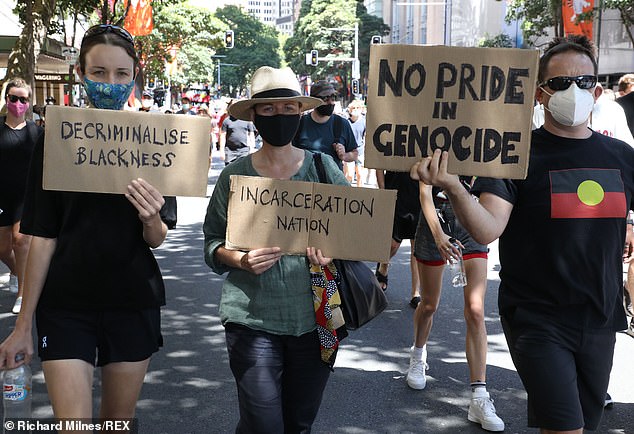 Plenty used hand-written signs to express their views, including these three protestors (pictured) 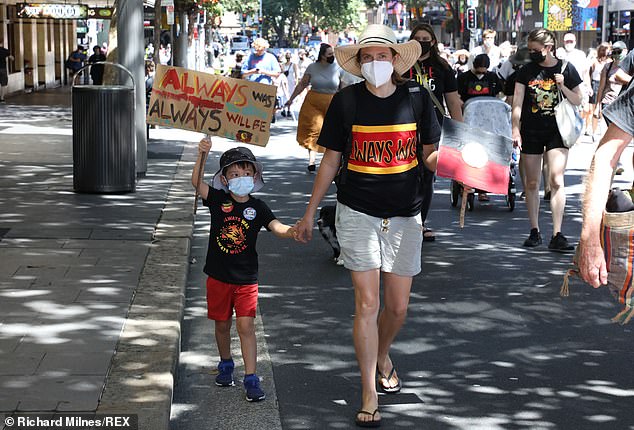 In Sydney, some protestors (pictured) were very young, but they still looked to get their point across 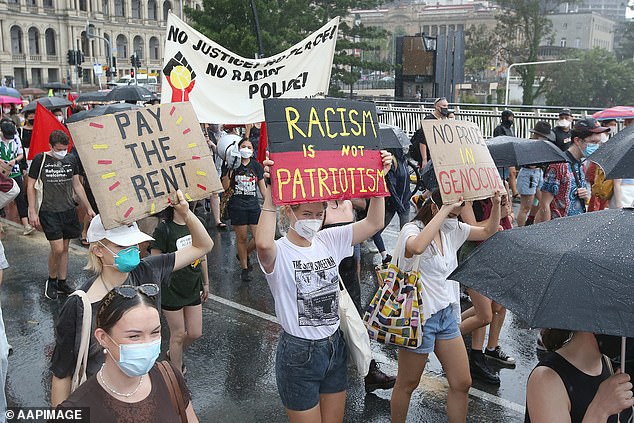