Talatau Amone was the villain for St George Illawarra as the Dragons lost 20-16 against the Titans, as his mistake set up Gold Coast’s golden point try.

Wizardry was in short supply in an error-strewn nine minutes of golden time period at a rain-soaked Suncorp Stadium on Magic Round, with both teams missing four field goal attempts.

The Titans were responsible for three of those misses and there seemed to be little danger for the Dragons when Gold Coast’s halfback Toby Sexton saw his attempt deflected wide off the post.

Talatau Amone knocked the ball on in golden point, setting up the Titans’ winning try

Amone looked to have secured the ball as it bounced loose close to the Warriors’ try line, only to spill it as he became the latest victim of the torrential rain that battered Brisbane throughout Saturday.

Gold Coast immediately capitalised on the mistake, moving the ball quickly to Jamayne Isaako who scored in the corner to give the Titans a first win after five consecutive losses.

The drama came after a heart-stopping first half of golden point where Isaako and Zac Lomax missed field goal shots.

Both teams scored three tries apiece in regulation to be level 16-all at fulltime with recalled forward Jarrod Wallace’s close-range 73rd minute try cancelling out what Moses Suli thought would be the winner for the Dragons just four minutes before. 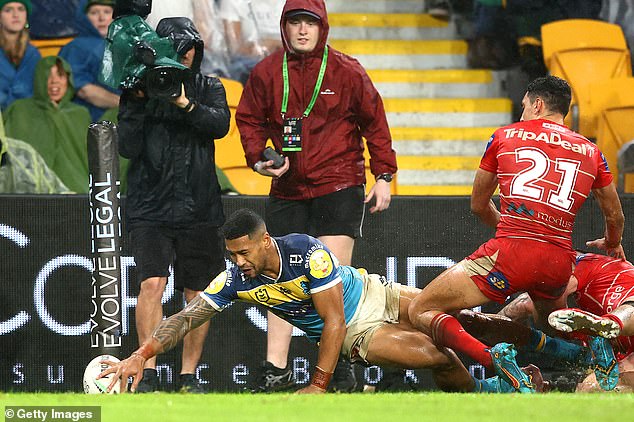 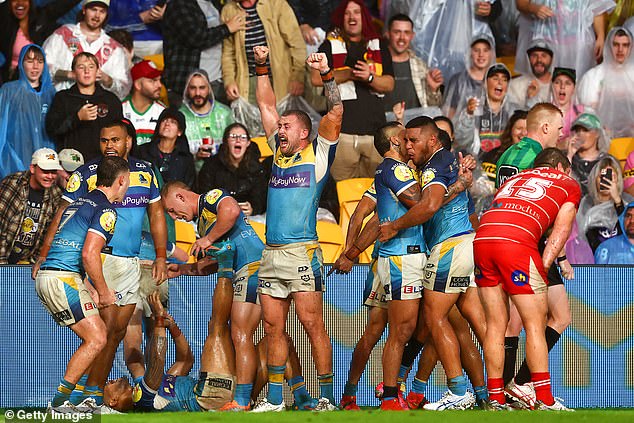 Isaako’s try secured a 20-16 golden point win for the Titans, their first after five straight losses

The Titans made a bright start, sparked by captain Tino Fa’asumaleaui’s big hit on Jack De Belin in the opening minutes.

Their enterprise was reward when a Toby Sexton bomb was batted back by Phillip Sami and eventually worked to AJ Brimson, who dived over for his second try of the year.

Gold Coast enjoyed a period of dominance as they forced the Dragons into five straight line dropouts. 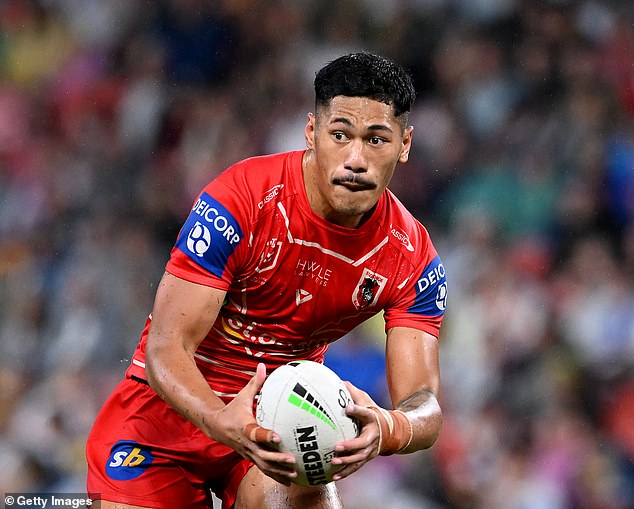 Despite 250-game man Josh McGuire being sin-binned for a professional foul, the Dragons held out the Titans and levelled the scores when Mathew Feagai crossed in the 21st minute with McGuire still off the field.

Gold Coast managed to snatch back the lead in the 28th minute when Beau Fermor pounced on a Sexton grubber to give the Titans a 10-4 halftime lead.

McGuire didn’t return for the second half as his milestone game ended early due to a groin injury but with Hunt steering proceedings, the Dragons levelled again in the 54th minute when De Belin crashed over for his second try in as many weeks.

Returning Jayden Campbell’s 60th minute break, where he stepped through several Dragons tackles down the middle of the field, had the crowd on their feet before Brimson took it within 10 metres of the line but Gold Coast were unable to back up their young fullback’s work with a knock-on just moments later. 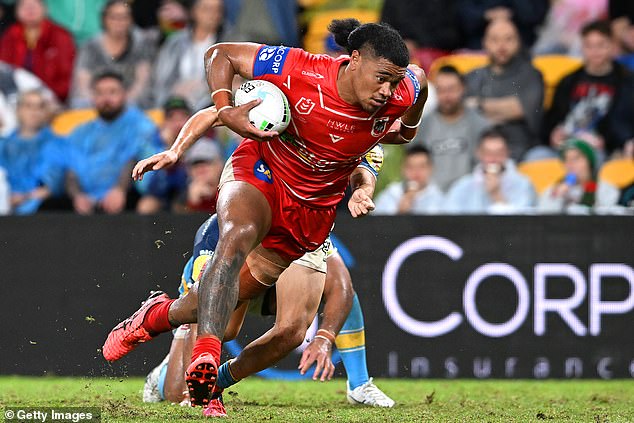 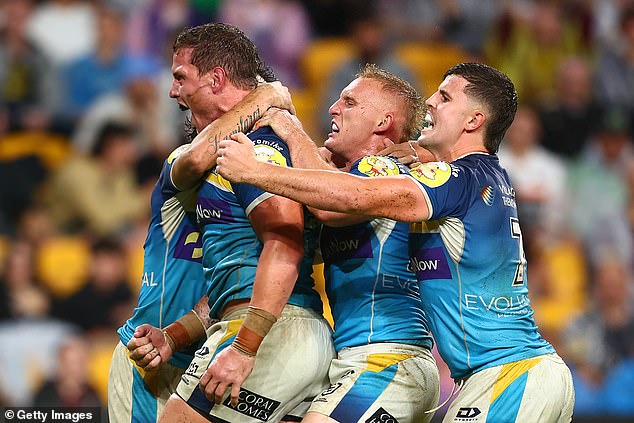 When Sami was placed on report for a shoulder charge as Mikaele Ravalawa tried to force his way over in the corner, Lomax stepped up to kick the penalty goal and put the Dragons in front for the first time in the game with 15 minutes to play.

Suli barrelled over in the 69th minute and the Dragons appeared to be heading to a win but Wallace’s rampaging effort moments later again levelled the scores and set up a grandstand finish.

Neither team could find a field goal to win the game in the remaining five minutes before the extra period and Isaako’s dramatic winner.