It is not the type of drug typically taken by thrillseekers.

But beware, as just two paracetamol tablets (1,000 mg) could turn someone into more of a risk-taker, a study suggests.

Researchers asked 189 participants to rate the risk involved in situations including skydiving, bungee jumping, and starting a new career in their thirties.

People who had been given paracetamol saw these activities as less dangerous than those who were given an inert powder as a placebo.

They were also more at ease with the idea of risking a day’s wages to bet on a horse race.

Researchers found that paracetamol alters perception of risk by making certain activities seem less dangerous. Participants of a new study ingested 1,000 mg of the drug or a placebo and were asked to rate certain activities based on risk

Dr Baldwin Way, lead author of the study from Ohio State University, said: ‘Although long thought to just influence our pain, it has recently been realised that paracetamol also influences our emotions and thus our risk-taking.

‘It should be emphasised that it doesn’t turn us into daredevils – it likely influences us a bit towards the riskier choice in some contexts.’

Paracetamol, used to treat pain and fever, is one of the most commonly taken drugs, and is also used in more than 600 medicines.

To see how it might affect people’s perception of risk, researchers did three experiments with 545 people.

In the first experiment people were asked to rate the riskiness of things like pesticides and nuclear power stations, with those on paracetamol not answering much differently. 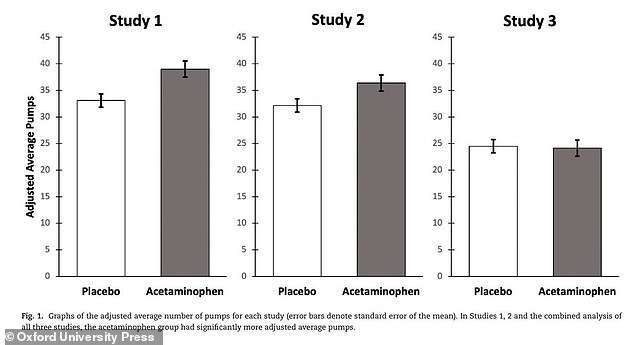 The study recruited 189 collect students who were given either 1,000 mg of the drug or a placebo that looked exactly the same – this group was told it was acetaminophen prior to ingesting it. After the drug took effect, volunteers were asked to complete a survey that ranked certain activities based on risk

But in the second experiment, when 189 people were asked about the danger of doing things in their own lives, those taking paracetamol appeared much less risk-averse.

They rated activities including taking a skydiving class, starting a new career in their thirties and walking home alone at night in an unsafe area of town as less risky.

Social risks, and recreational risks like bungee jumping, seemed to alarm people on paracetamol less than they did people given a decoy powder drink.

Those who had taken the painkillers saw financial risks as slightly less scary too.

The study, published in the journal journal Social Cognitive and Affective Neuroscience, also asked people to play a computer game in which they blew up a balloon. 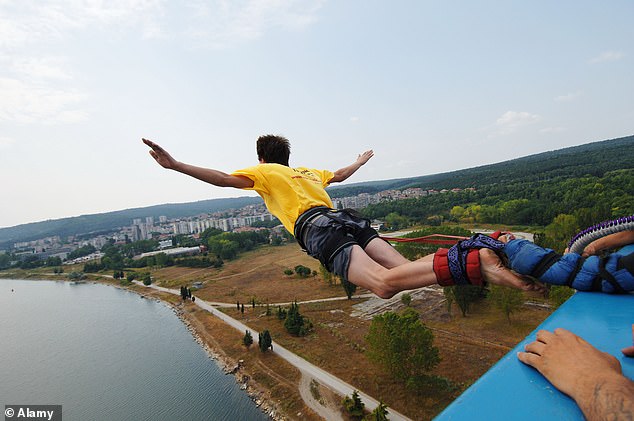 Those under the influence of the acetaminophen rated activities like bungee jumping or starting a new career in your mid-30s as less risky than those who took the placebo.

They earned a small cash reward with each puff, which they could bank at any time, but if they kept going and the balloon burst, they could lose all their money.

‘As you’re pumping the balloon, it is getting bigger and bigger on your computer screen, and you’re earning more money with each pump,’ Dr Way said.

‘But as it gets bigger you have this decision to make: Should I keep pumping and see if I can make more money, knowing that if it bursts I lose the money I had made with that balloon?’

Results for this were variable, but one experiment with 142 people showed those on paracetamol were willing to keep risking their virtual money for longer.

‘If you’re risk-averse, you may pump a few times and then decide to cash out because you don’t want the balloon to burst and lose your money,’ said Way.

‘But for those who are on acetaminophen, as the balloon gets bigger, we believe they have less anxiety and less negative emotion about how big the balloon is getting and the possibility of it bursting.’

Scientists suspect that paracetamol may make thinking about the negative consequences of taking a risk less worrying.

The results have a variety of real-life implications, Dr Way said.

For example, acetaminophen is the recommended treatment by the CDC for initial coronvirus symptoms.

‘Perhaps someone with mild COVID-19 symptoms may not think it is as risky to leave their house and meet with people if they’re taking acetaminophen,’ Way said.

‘We really need more research on the effects of acetaminophen and other over-the-counter drugs on the choices and risks we take,’ he said.