Drivers have been warned to take advertised electric car ranges ‘with a pinch of salt’ after tests revealed they are – on average – almost a fifth lower than what manufacturer’s state, according to Which?

It tested 60 electric vehicles of all sizes that are available on the market today and found that the average range was 192 miles – 46 miles short of the 238-mile ‘official’ full-battery distance quoted.

For family-friendly medium-size hatchbacks, the average range shortfall is 54 miles, while the most disappointed cases shows that some cars fall 100 miles shy of their claimed single-charge distances.

Take electric car ranges ‘with a pinch of salt’: Consumer watchdog, Which?, says its independent tests found that EV ranges are 18% shorter than ‘official’ figures suggest

With the Government scheduling the end of sale of new petrol and diesel cars from 2030 – and petrol-electric hybrids from 2035 – there has been a rapid uptake of electric vehicles in recent years.

Latest sales figures suggest that one in six new cars registered in Britain is fully electric and there are now said to be an estimated 456,000 motors on our roads that are powered entirely by batteries.

However, there are still many drivers who are concerned by range anxiety and running out battery.

Which? says customers need to be mindful that the ranges quoted by car makers are those achieved during the ‘official’ WLTP (short for Worldwide Harmonised Light Vehicle Test Procedure) cycle that every production model is subject to before going on sale.

It warns the laboratory-based WLTP cycle has a ‘strong tendency to overstate the efficiency and subsequent range of electric vehicles, when compared to our own tests – and that figure can vary significantly’.

While Which? points out that its own tests are conducted in a lab, they also use real driving condition on closed tracks and on the road. 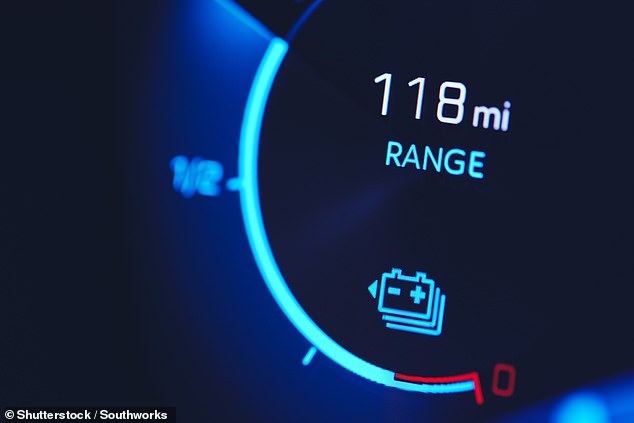 Despite sales of electric cars accelerating at a record pace in recent months, there are still many who are concerned about ‘range anxiety’

In total, each car is driven around 500 miles in order before the watchdog calculates an estimated range it believes is closer to what’s achievable for customers.

This, on average, is 18 per cent less range than what the advertising brochure and manufacturer website will tell you, the report says. 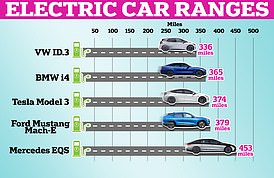 Want to know which electric models currently in showrooms have the longest claimed ranges on a single charge?

This is Money has listed the top 10 in our guide here. This will be updated if a new models arrives and gazumps cars in this list.

Emily Seymour, Which? sustainability editor, added: ‘Overstated fuel economy is something petrol and diesel car drivers will already be aware of and we’ve found the same is true of electric vehicles.

‘Our independent tests show electric cars fall an average of 45 miles short of official figures with some cars losing well over 100 miles of their claimed range – a real issue for those planning to travel long distances or people who can’t charge at home.

‘If you are in the market for an electric car, take the official range with a pinch of salt as it doesn’t reflect real-world driving conditions.’

Some cars were found to miss their claimed ranges by an excess of 100 miles, Which? says.

‘When we originally tested the dual motor ‘long range’ version of the Polestar 2, it had a claimed WLTP range of 298 miles but delivered just 183 miles in our tests. That’s a colossal loss of 115 miles (39 per cent) of range compared to the official claim,’ it said.

Polestar has since released ‘over-the-air’ updates to customers via the car’s built in system, which has since improved the car’s range.

After re-testing the same car, Which? found it’s tested range had improved to 247 miles. However, this is 18 per cent less than the (also increased) official range of 302 miles. 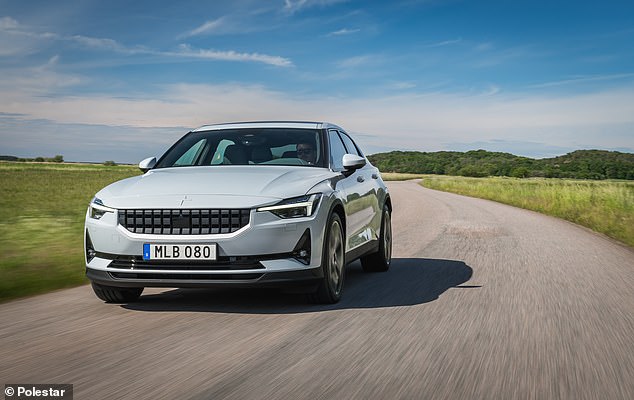 Tests of an early version of the Polestar 2 found the range of 39% shorter than what the official claims suggested. The car has since received an update – which is sent to existing cars ‘over-the-air’ – and has reduced the difference to 18% 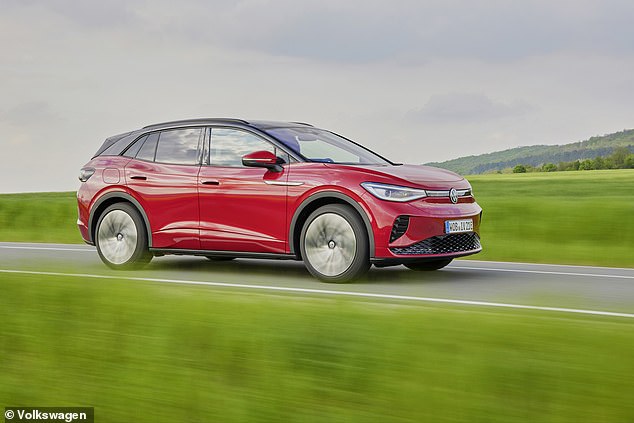 Which? found that a VW ID.4 GTX (pictured) has a maximum driving range of 193 miles on a single charge. The official test suggests it can do 300 miles 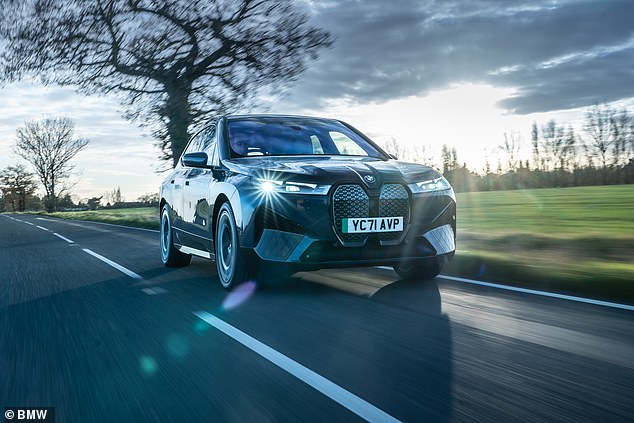 Which? also found that the BMW iX SUV has a tested range that is two miles longer than what the sales brochure suggests

The performance version of the Volkswagen ID.4 SUV – called the GTX – was also found to be more than 100 miles short of its official range, with the watchdog’s tests arriving at a 193-mile figures. VW states this car should be good for 300 miles on a full charge, which is 107 miles more than what Which? found.

Yet there are some exceptions to the rule, with examples of electric cars that surpass their claimed ranges.

The BMW iX achieved a 382-mile battery range, which is two miles more than the official WLTP figure.

‘Differences like this is why our independent lab tests are so important.’ the charity said.

Grouping all 60 cars into their different size categories, Which? found that the average medium-size family hatchback can manage 151 miles on a single charge, which is 26 per cent (54 miles) less than the average official range of 205 miles.

Ranges of smaller electric cars are, on average, 14 per cent (24 miles) less than claimed, while a small SUV is down 17 per cent (40 miles) on the quoted range figure and larger SUVs around 19 per cent off.

Manufacturers do state that all official range figures – like official miles per gallon stats advertised for petrol and diesel cars – are for comparative purposes only.

How far you can travel on a single charge affected by a number of different variables, such as the temperature and which functions – like air-conditioning – are being used and for how long.

Battery range will vary depending on the type of journey made, the conditions, driving style, vehicle load and other factors

Mike Hawes, chief executive at the Society of Motor Manufacturers and Traders, explains: ‘By law, manufacturers are required to test all vehicles of all technologies to the same, repeatable official standard – the WLTP test.

‘This test is regulated by government authorities and it is these results – and only these results – that manufacturers are required by law to publish within any advertising communications.

‘There will, however, always be a difference between lab tests and real-world use as well as between official and non-official tests where the parameters and methodology may be different or unclear.

‘Battery range will vary depending on the type of journey made, the conditions, driving style, vehicle load and other factors which is why the WLTP is a standardised test designed to overcome these variables and provide consumers with accurate and comparable results across all vehicles.’

While range anxiety would have been a major concern with electric cars around a decade ago, a growing public charging infrastructure, shorter charge times and advancements in batteries should see it become less of an issue in the run-up to 2030.

In fact, just last month Mercedes completed a 747-mile journey from Stuttgart, Germany, to Silverstone on one charge in its prototype EV, called the EQXX.