England are into the semi-finals of the T20 World Cup – but only after their unbeaten run was ended by South Africa, and opener Jason Roy suffered a calf injury that looks set to rule him out of the rest of the tournament.

On a night when England’s powerful batting line-up was finally outmuscled, the second of those two mishaps will be of greater concern as they attempt to become the first team to hold both white-ball trophies at the same time.

Roy’s partnership with Jos Buttler has been one of the driving forces behind their passage to the last four – not least during the demolition of Australia. Misfortune struck in the fifth over after England had knocked off 38 of the 190 they needed for a full house of five Super 12 wins. 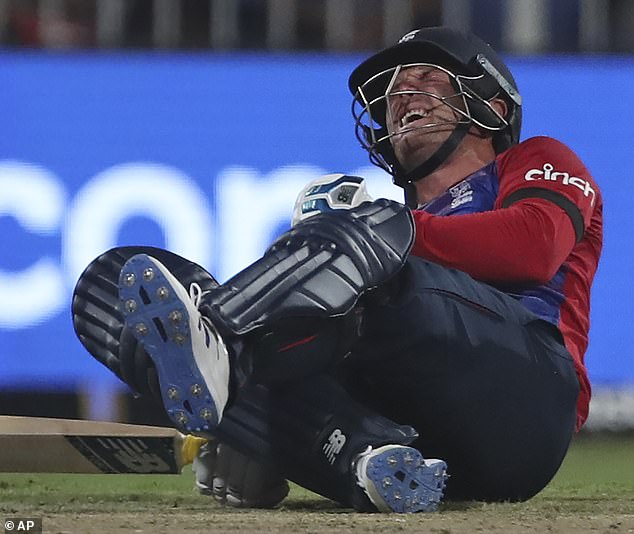 The result, in their final group game, was compounded by a calf injury to Jason Roy (pictured)

As Buttler tucked slow left-armer Keshav Maharaj into the leg side, Roy – who had hurried to 20 off 15 balls – set off for a single and pulled up almost immediately, before hopping the rest of the run.

Soon, he was being helped off the pitch, and looked distraught. If, as seems likely, today’s scan confirms he is out of the World Cup, England will have to decide who opens in his place.

Jonny Bairstow has done the job before, but is short of runs, while Moeen Ali responded to his promotion to No 3 by top-scoring with 37 off 27. Sam Billings may now slot straight into the middle order.

‘We’re gutted for Jase,’ said Eoin Morgan. ‘He’s unbelievably important. He’s a guy who epitomises everything we are about in the changing room and the way we play.’

It was the second time in six days that an England player had walked off at Sharjah, following the tournament-ending thigh injury to fast bowler Tymal Mills against Sri Lanka. If Morgan, who has also had to manage here without Jofra Archer and Ben Stokes, does lift the trophy in Dubai on Sunday, he will have done it the hard way.

Assuming Pakistan beat Scotland on Sunday, his team will play any one of New Zealand, Afghanistan or India. The New Zealanders meet Afghanistan in Abu Dhabi today, with Kane Williamson’s side knowing that victory will mean a semi-final in Abu Dhabi on Wednesday.

But if Afghanistan win, Group 2 becomes a scramble for net run-rate, with India then favourites to qualify because their last game is against Namibia on Monday. And if India do make it, England’s semi against them will be moved to Thursday in Dubai for reasons of stadium capacity.

South Africa’s hopes of qualifying were dependent on net run-rate too. After some brutal batting from Rassie van der Dussen and Aiden Markram, who between them crashed 10 sixes, they needed to limit England to below 131 if they were to pip Australia.

Anrich Nortje managed to dismiss Jos Buttler for 26 off 15 balls, which meant his tournament average plummeted to 120, and spinner Tabraiz Shamsi trapped Bairstow for a single, but it was never a realistic prospect against a side whose batting is so deep and relentless.

And while Liam Livingstone launched three sixes in three balls off Kagiso Rabada – the first, out of the ground beyond midwicket, was the competition’s biggest blow at 112 metres – England were in the hunt. 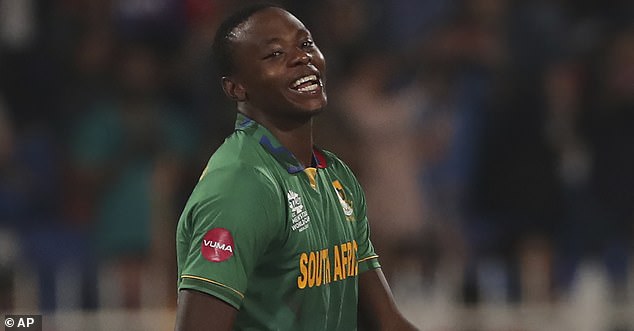 But with 14 required off the last over, Rabada hit back with a hat-trick, as Chris Woakes, Morgan and Chris Jordan all perished to catches in the deep. But by then the only team really celebrating were Australia.

For England, who were sloppy in the field, at one point handing South Africa three lots of overthrows in quick succession, the hope is they have got their one middling performance out of the way when it least mattered.

‘We’re not going to be at our best every game, but we do need to find ways to win,’ said Morgan.

‘In the field we weren’t as intense as we have been in previous games. And when a premium batsman goes down, it does hurt you, with the form he’s been in.’

England have a few days now to dust themselves off – and get in the right frame of mind for their tilt at history.