Sylvester Stallone had confessed that he agreed to do a reality series with his family, mainly because it would allow him to be able to spend more time with his children.

It turns out not spending as much time with his kids as he could have over the years is one of the big regrets of his life.

While filming for the still untitled show has been on-going, there didn’t appear to be a camera crew following the Hollywood legend when he stepped out to go jewelry shopping on Thursday with his wife, Jennifer Flavin, and one of their three daughters, Sistine.

Family time: Sylvester Stallone, 76, and his wife Jennifer Flavin, 54, spent part of their Friday shopping with their daughter Sistine Stallone, 24, who’s pictured behind her parents, in Beverly Hills on Thursday

The trio were spotted just as they were making their way out of Maxferd Jewelry & Loan in Beverly Hills, where they had been shopping for some new bling.

Leading the way back on to the street, Stallone looked toned and fit dressed in blue jeans, a blue plaid shirt, and matching boots.

The Rocky and Rambo star also sported stylish sunglasses, and had his salt and pepper hair cut short and pushed back off his face without a part.

Flavin, 54, trailed right behind her husband as they left the store looking casual-cool in fitted blue jeans, a pink-patterned shirt and brown boots.

The entrepreneur and former model had her dirty blonde locks pulled up into a ponytail, with the exception of the hair she left dangling around the frame of her face. 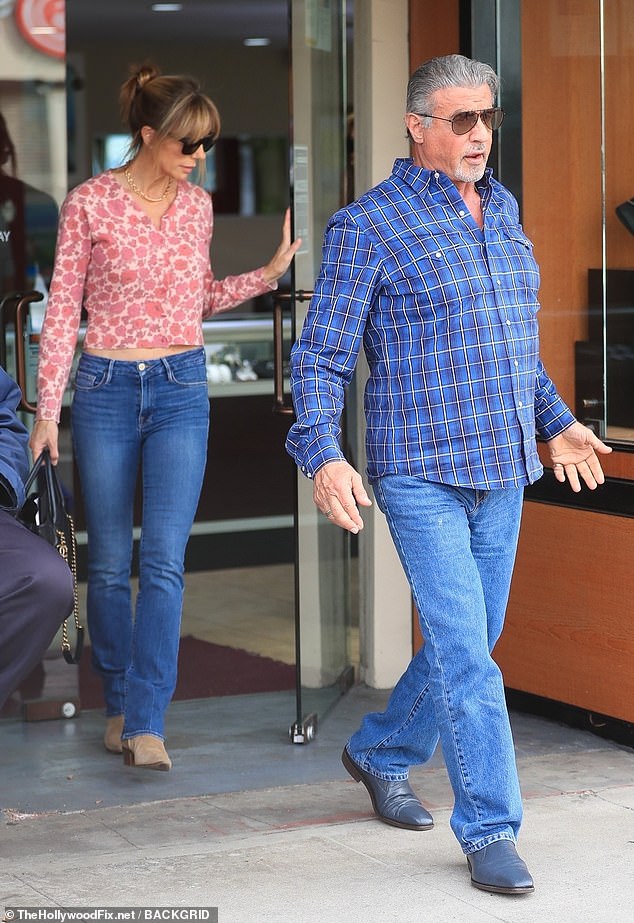 Leading the charge: The legendary Hollywood leading man led his family out of the jewelry store and back to their parked vehicle while in Beverly Hills 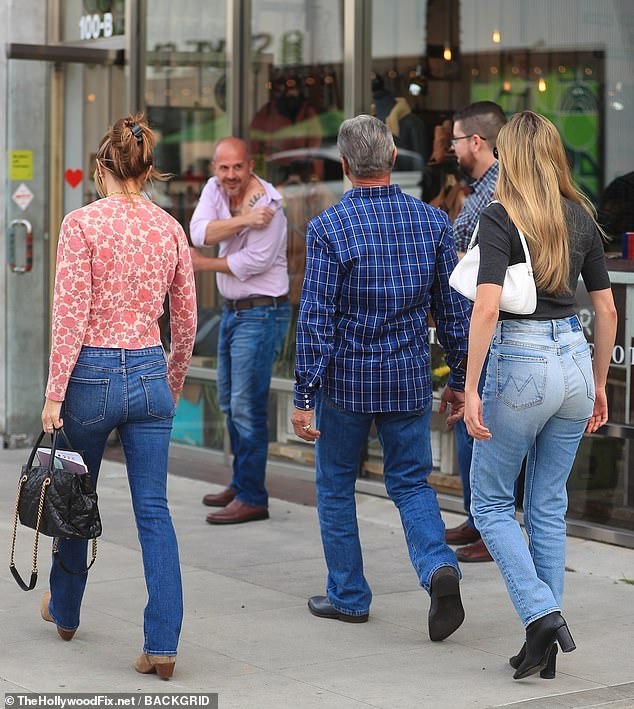 Family matters: The Rocky and Rambo star confessed he agreed to do reality show as way to spend more time with his three daughters

Sistine Stallone, 24, did her best to keep up with her parents dressed in fitted blue jeans, a black shirt, and matching leather boots, all as she carried a white purse over her left shoulder.

The second oldest of the couple’s three daughters had her blonde tresses styled long, straight, and flowing near her waistline in the back with a part in the middle.

The Stallones have reportedly been shooting their new reality series this past year, while working with the same production team that made Keeping Up With The Kardashians.

While deciding whether to sign-off on the show, the longtime action hero thought about all the time he missed with his children on the sets of his many films, and how shooting the new series with his wife and three daughters would give him much more family time. 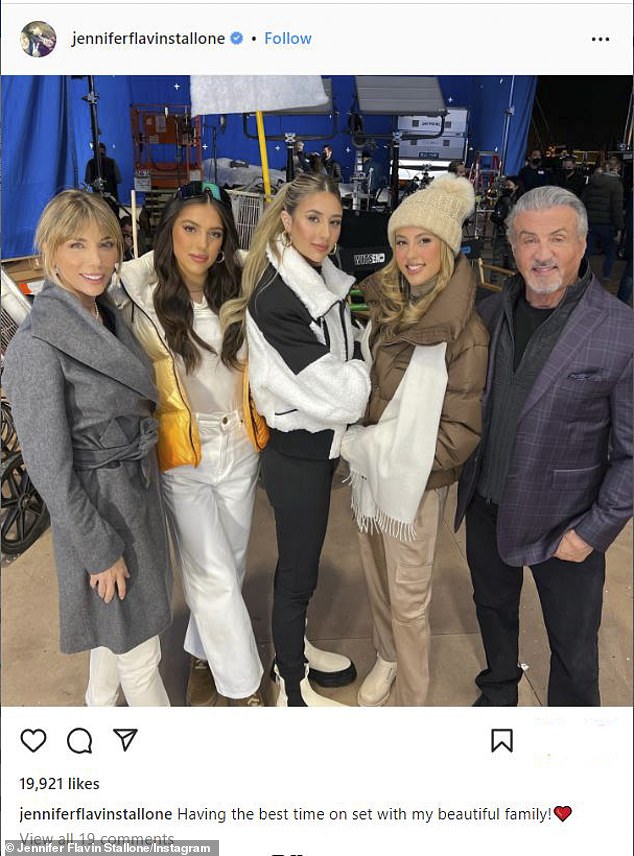 Reality world: Stallone signed off on doing a reality show with his wife and three daughters this past year, using same production team that made Keeping Up With The Kardashians

During an interview with The Hollywood Reporter, Stallone confessed time he agreed to do the show for his daughters, and the time he’ll be able to spend with them, instead of another film set by himself.

‘[That’s] one of the reasons I wanted to do the reality show that I’ve been taking a lot of s**t for,’ he said, before confessing he’s excited for viewers to see him in his element.

He explained how he finally said yes because he’s on top again in his work as a filmmaker: ‘I have this resurgence going on, so why not at this moment show people what it is like, not when you are over or retired?’

The New York City native also revealed he’s doing the show for his daughters, which along with Sistine also includes her sisters Sophia, 26, and Scarlet, 20. 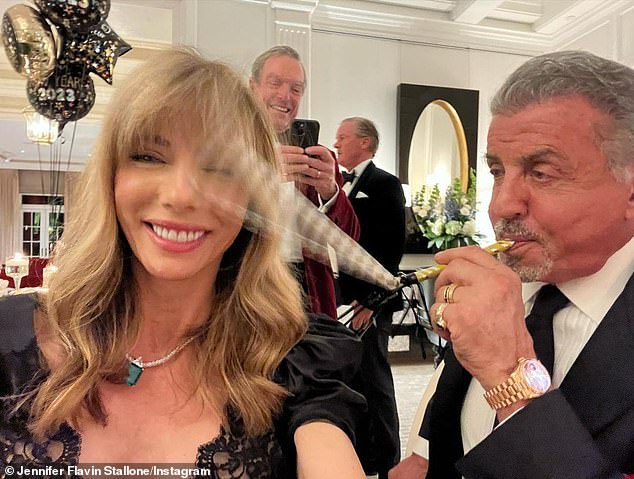 New Years celebration: The Stallones spent their New Year’s Eve at a party, where the leading man showed off his comedic touch by blowing off one of those festive toy horns in front of his wife’s face Regrets: Stallone confessed losing precious time with his children over the years is one of his big regrets; while wishing everyone a happy new year, the Oscar winner referenced how ‘it goes way too fast’

Stallone went on to confirm that he and Flavin’s recent troubles, which included her filing for divorce this past August, only to reconcile, will be documented on the reality show.

Stallone and Flavin, who will be celebrating their 26ht wedding anniversary in May, started their romance back in 1988 but broke up after several years together. They would eventually reunite several years later and go on to tie-the-knot in 1997.

Along with their three daughters, the Oscar-winner also had two sons with his first wife, Sasha Czack: Sage, who died of heart failure in July 2012 at the age of 36, and Seargeoh, 44.

Stallone was also previously married to actress Brigette Nielsen for about two years in the 1980s. 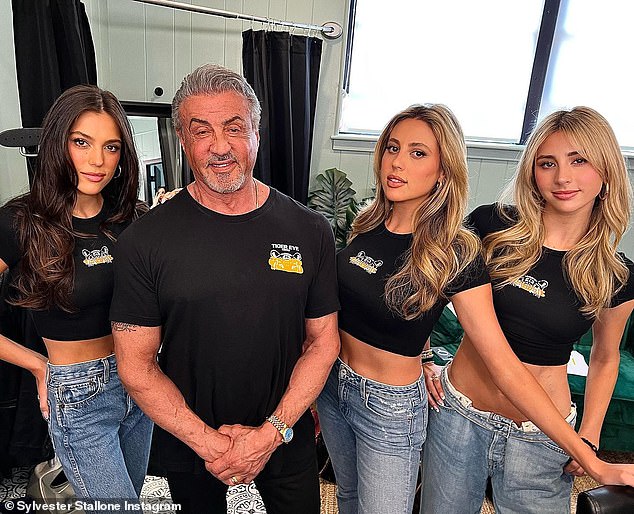 For the kids: The New York City native revealed he signed-off on the reality series, in part, for his daughters Sophia, 26, Sistine, 24, and Scarlet, 20: ‘A lot of things have conquered me, but I have conquered my dreams and aspirations. Now it’s their time,’ Stallone said, while remarking about his kid’s careers 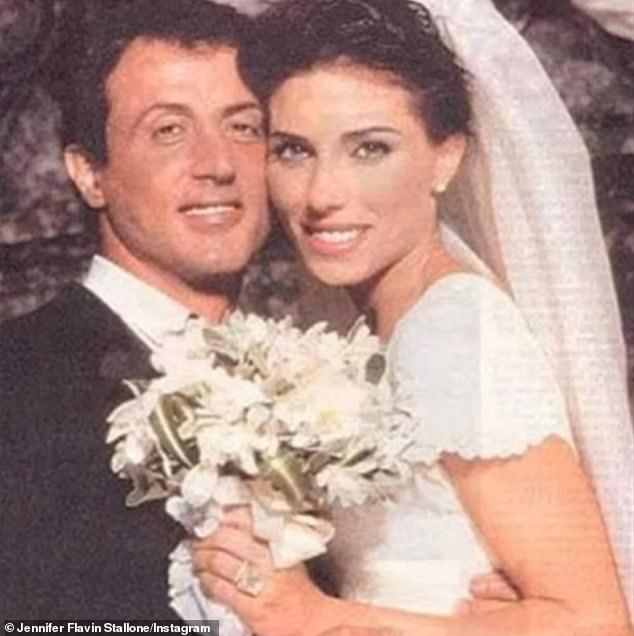 Item: Stallone and Flavin will be celebrating their 26th wedding anniversary in May; they are pictured during their special day in 1997