Sydney Sweeney is relishing in the most accomplished year of her acting career after receiving multiple Primetime Emmy Award and starting to film her superhero movie Madame Web with Dakota Johnson in the title role.

And with principal photography having already begun in Massachusetts, it seemed like the perfect time for Sweeney to step on to the worshipped grounds of Fenway Park to deliver the ceremonial first pitch ahead of the Red Sox-Blue Jays game on Friday.

The crowd showed their support for Sweeney by applauding as she made her way out towards the pitching mound wearing her version of Daisy Dukes.

Making her pitch: Sydney Sweeney, 24, took advantage in a break from shooting her new film, Madame  Web, to deliver the ceremonial first pitch ahead of the game between the Blue Jays and Red Sox in Boston on Friday

Showing her support for the home team Red Sox, the actress matched her skimpy denim shorts with a cropped version of the team’s home jersey.

She rounded out her sporty ensemble by wearing a pair of white leather Converse sneakers, and her blonde tresses styled long past the middle of her back and flowing over her ample chest region.

Born in Spokane, Washington and raised in northwestern Idaho, Sweeney was active in sports throughout her formative years, which included playing baseball, basketball, soccer, skiing, and eventually mixed martial arts at 14. 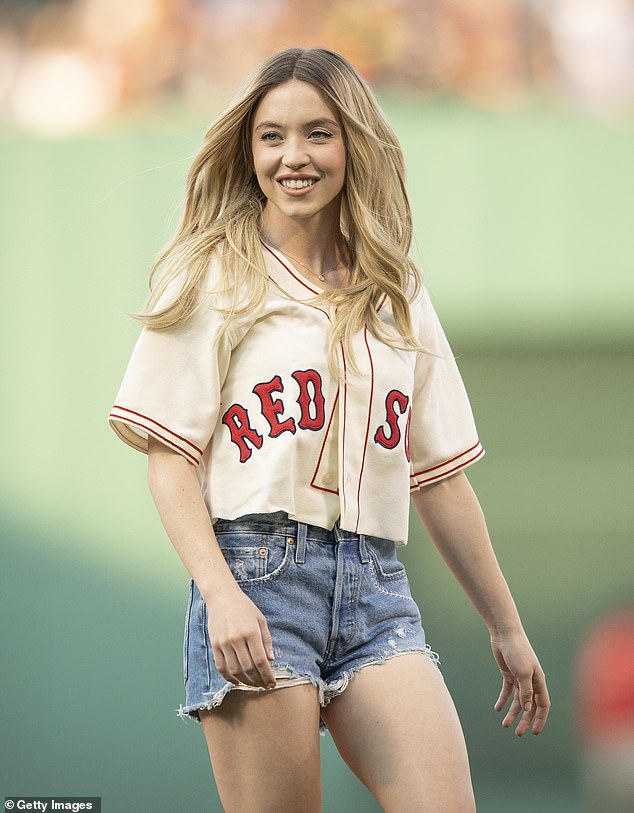 Sporty: The Euphoria star showed her support for the home team Red Sox by wearing a cropped Red Sox jersey with Daisy Dukes and sneakers 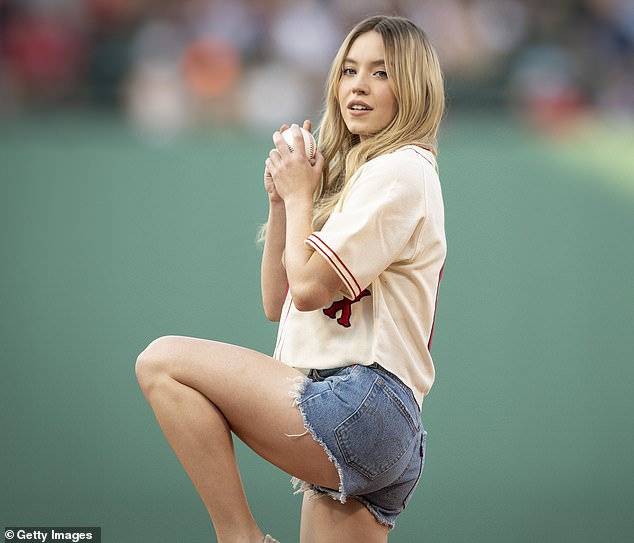 And from the looks of her pitching delivery, it appears all that practicing and playing over her earlier years paid off.

Sweeney looked to have fine form when she threw her pitch to the catcher awaiting at home plate, which included a nice leg kick and forward motion with her right arm.

She even held the ball nicely along the red stitching for her throw that again got a roar from fans. 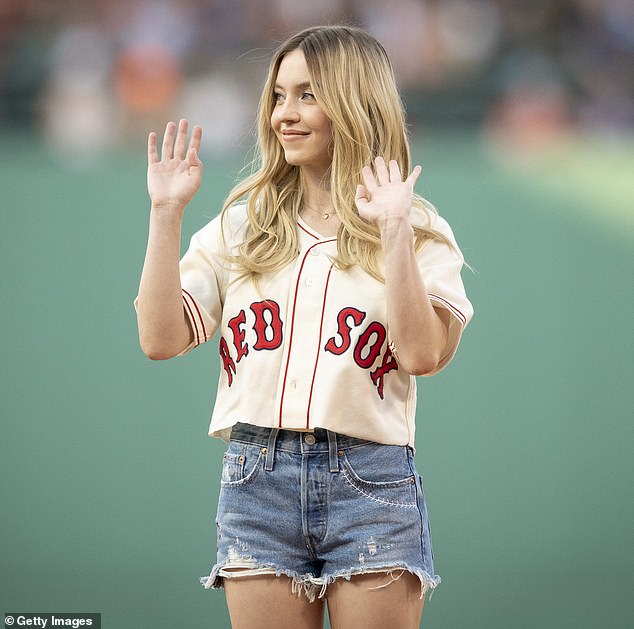 Crowd approval: The White Lotus star is in Massachusetts, in part, to shoot the superhero film Madame Web, which stars Dakota Johnson in the title role

Sweeney learned she was nominated for two Primetime Emmy Awards not long after arriving in Massachusetts for the Madame Web shoot just over a week ago.

The Madame Web production began in Boston around the same time, and is expected to move to other locations in the commonwealth of Massachusetts through parts of September. From there filming will move to New York and Mexico before wrapping mid-October. 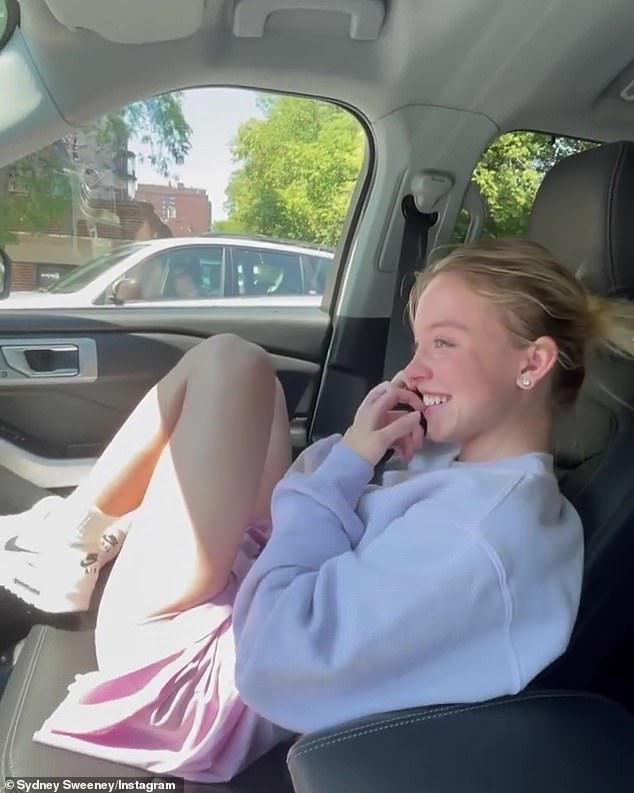 Two Primetime Award noms: Sweeney was all smiles when she called her mother to tell her the good news that she had received two Primetime Emmy Award nominations 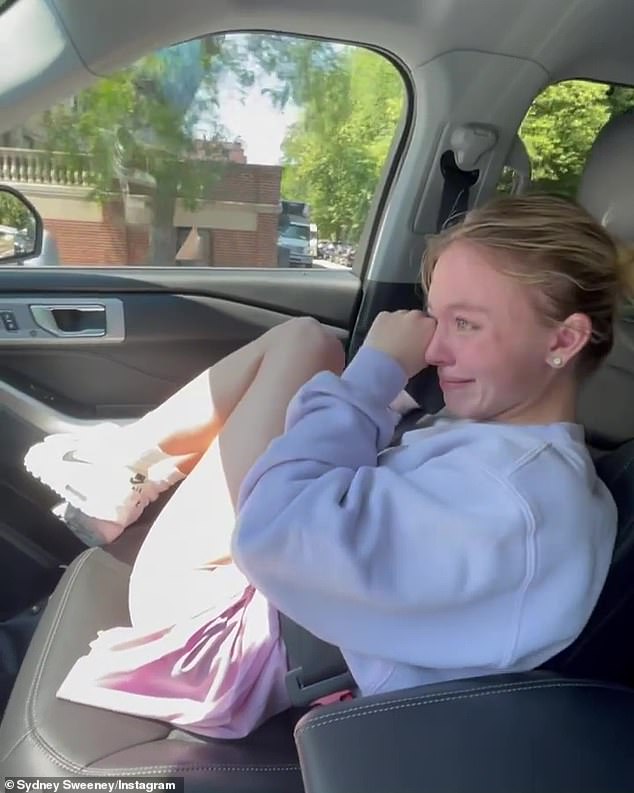 Family moment: It didn’t take long before the actress started to shed a few happy tears while chatting with her her mom about her accomplishments

Directed by S. J. Clarkson from a screenplay by Burk Sharpless and Matt Sazama, Madame Web is intended to be be the fifth film in Sony’s Spider-Man Universe (SSU).

Madame Web is scheduled to premiere in theaters in the U.S. on October 6, 2023.

Sweeney and the rest of the nominees will learn who are the winners at the 74th Primetime Emmy Awards on September 12. 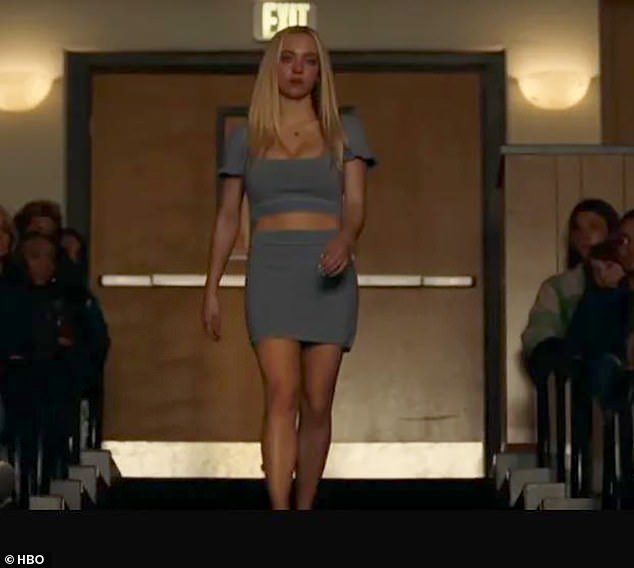