VAPING is to blame for ‘Muslims killing Muslims’ gang shootings, Islamic schoolboy warns in sermon to fellow students – as he worris his peers are taking the first step to a life of crime by using e-cigarettes in campus toilets

Vaping in the school toilets is a stepping stone towards a life of crime in violent drug gangs, a student from Australia’s second largest Islamic school has warned.

The unnamed schoolboy made the claim in a recent speech to other Malek Fahd students – a co-educational school of more than 2,000 at Greenacre in Sydney’s southwest – during a religious service.

‘We hear Muslims killing Muslims,’ the student said, in reference to the wave of Middle Eastern gangland shootings that have rocked Sydney since 2020.

‘There are three actions which the current generation did in their youth which have caused their future destruction and the first one is acting like a gang member and normalising drugs,’ the student continued, reports The Daily Telegraph.

The student warned his peers vaping in toilets was the a step towards gang crime (pictured: Malek Fahd Islamic College in Sydney’s southwest)

He said those involved in drug pushing syndicates had all begun with something small ‘like a vape’ and warned that ‘brothers who hide in the bathroom’ attempting to increase their popularity by smoking were on a dangerous path.

Even though considered minor, the student said the behaviour was normalising drugs and rule breaking and that it would have significant consequences down the track.

Similarly, the young Muslim warned his peers that those who watched violent videos online such as of beheadings or torture were also at risk of descending into crime and gang culture because it would desenstise them.

‘I have seen some boys watching some of these videos and finding it funny. They actually find it entertaining, it makes you question their psychological state,’ he said.

While nicotine vapes are illegal in Australia without a prescription, authorities have warned they are easy to find, with manufacturers issuing ‘import at your own risk’ warnings to Australian buyers.

‘We know that amongst many young people, e-cigarettes or vapes have been considered safe and certainly safer than cigarettes,’ NSW Deputy Chief Health Officer Marianne Gale said earlier this year.

The combination of having a sweet or fruity flavour, being in colourful packaging and their ‘vapour’ often perceived as water, people often consider vapes harmless. 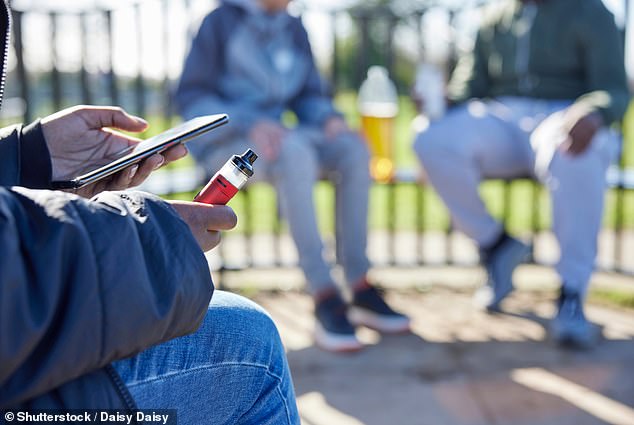 The effects of the chemicals in vapes are not fully regulated or studied and their is evidence they can cause throat and lung irritation, heartrate issues, mood swings, and affect memory among others.

Vapes also contained addictive nicotine and vapers have an increased likelihood of taking up cigarette smoking.

The habit has surged in popularity since 2018 especially with school students.

NSW Health estimates one in 10 young people aged from 16 to 24 are vapers, while the NSW education department has seen a 771 per cent increase in reports of vaping to its incident support line.

As an Islamic School, this approach is faith informed and guided by values such as compassion, care, fairness, and respect.