Sweden has seen its lowest increase in the coronavirus death toll for almost a fortnight, with only 17 fatalities being reported.

The number of new cases also fell again to 466, following a two-day peak in the middle of week of 700+ deaths per day.

The low figures come despite Sweden not enforcing a lockdown, and they will pile the pressure on countries like the UK that did enact stricter measures to contain the virus.

The figures announced at 2pm today are surprisingly low compared the sharp increase Sweden had been experiencing during the week.

Sweden has seen its lowest increase in the coronavirus death toll for almost a fortnight, with only 17 fatalities being reported 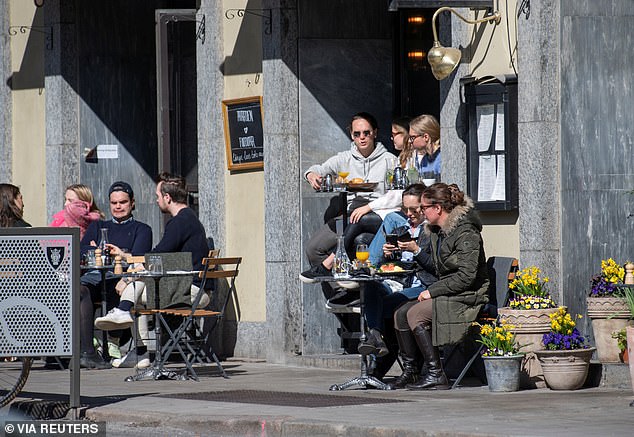 However, trends in the data released by the country’s Public Health Authority show that confirmed deaths and cases fall over the weekend before rising again, because of what is believed to be a delay in reporting.

The Stockholm and Sörmland regions have been hit hardest by the pandemic.

However today people were seen enjoying the sunshine outside cafes and bars in the Swedish capital on the eve of Easter Sunday, after officials did not enforce a shutdown.

The country’s total number of cases now stands at 10,151, with 887 confirmed deaths. 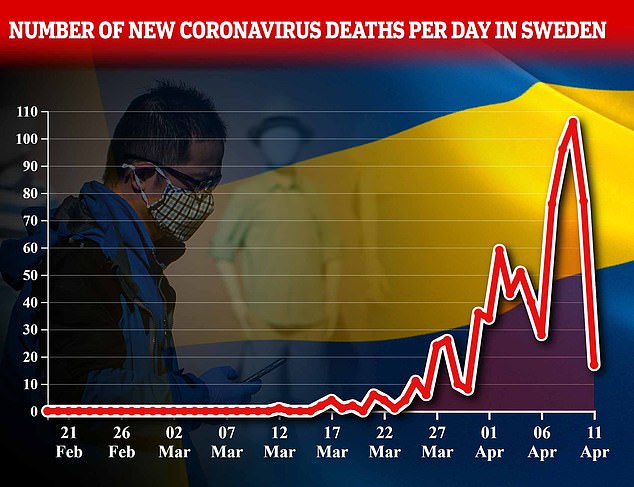 This graph shows the daily number of coronavirus deaths in Sweden, which fell to 77 today after skirting around 100 for the last three days

Yesterday, the daily death toll and the number of new coronavirus cases both fell.

There 77 new deaths – down from 106 on Thursday. The number of confirmed infections went up by 544, a drop of nearly a quarter from yesterday’s near-record figure of 722.

These figures will likely be used to pressure governments which have resorted to lockdowns to battle Covid-19 to lift the draconian restrictions. 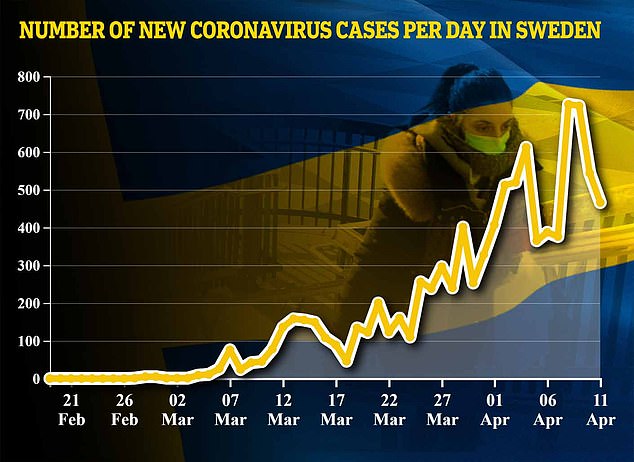 This chart shows the daily number of cases, which was also smaller today (544) than in the previous two days (726 on Wednesday and 722 on Thursday)

More than 4,000 of the country’s 9,685 confirmed cases are in the Stockholm area, according to official figures.

The government has also carried out random sampling which suggests that as many as 2.5 per cent of people in Stockholm have been infected.

That implies a higher figure of around 60,000 in the Stockholm region, suggesting that many people have had the virus without being added to the official count.

Unlike most of Europe, Sweden has not imposed a lockdown, and primary schools, shops, cafes, restaurants and bars remain open.

People are not generally ordered to stay at home, although they are told to isolate at the first sign of ‘slight cold-like symptoms’.

Swedes are advised to ‘keep your distance’ at gyms and sports facilities rather than avoiding them altogether.

There is a ban on gatherings of more than 50 people, but the rule is far more generous than the limit of two that Britain and Germany have set.

Finland has already moved to limit border crossings, fearing that the virus will spread from Sweden. 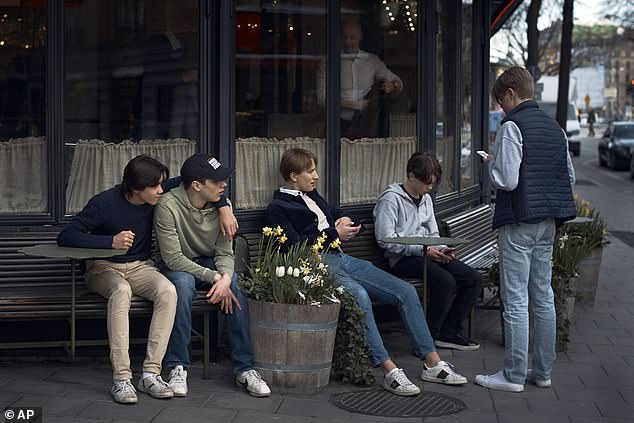 Young people sit at close quarters outside a restaurant in Stockholm earlier this week, where there is no lockdown to match those in most of Europe

The government in Stockholm has emphasised taking personal responsibility for public health, but most of its measures are not enforced.

The lack of a lockdown makes Sweden an outlier, but the government has rejected Donald Trump’s claims that the country is ‘suffering’ more than others.

Asked at a White House briefing on Tuesday what advice he would offer to leaders who were sceptical of social distancing measures, Trump replied: ‘There aren’t too many of them… They talk about Sweden, but Sweden is suffering very gravely.’

Swedish foreign minister Ann Linde pushed back against Trump’s claim that Sweden was not doing enough.

‘We are doing about the same things that many other countries are doing, but in a different way,’ Linde told broadcaster TV4.

‘We trust that people take responsibility.’ 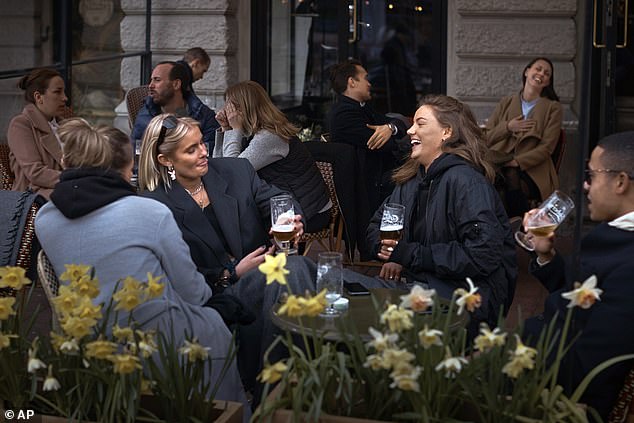 People sit around a table and drink outdoors in Stockholm on Wednesday, with the government holding out against a full-scale lockdown

Government epidemiologist Anders Tegnell said he did not believe Sweden was suffering any more than any other country.

‘No, we don’t share his opinion,’ he told reporters, referring to Trump.

‘Of course we’re suffering. Everybody in the world is suffering right now, in different ways,’ he said.

‘But Swedish healthcare, which I guess he alludes to… is taking care of this in a very good manner.

‘It’s a lot of work, it’s a lot of stress on the personnel and it’s really a fight for them every day, but it’s working.’

Prime minister Stefan Lofven says that while most measures were not bans he still expected all Swedes to comply.

‘The advise from the authorities are not just little hints,’ he said. ‘It is expected that we follow them every day, every minute.’