Sweden has the highest per capita coronavirus death toll over the last seven days than any other country in the world after shunning lockdowns.

Sweden had 6.08 deaths per million inhabitants per day on a rolling seven day average from May 13 to Wednesday.

But over the course of the pandemic all of the countries listed above (bar America) have had far more deaths per capita than Sweden.

It is also worth noting that all of the countries listed – particularly with reference to the rolling seven day average – have experienced the peak of the virus at different stages.

Sweden’s strategy, mostly based on voluntary measures regarding social distancing and basic hygiene, has been criticised by some as a dangerous experiment with peoples lives but also been put forward as a future model by the WHO .

Sweden’s open strategy seems to have softened the blow on the economy, with growth shrinking much less than in Denmark and Norway in the first quarter.

Basing its approach on a so-called ‘principle of responsibility’, Sweden has kept schools open (indeed compulsory) for children under the age of 16, along with cafes, bars, restaurants and businesses, and urged people to respect social distancing guidelines. 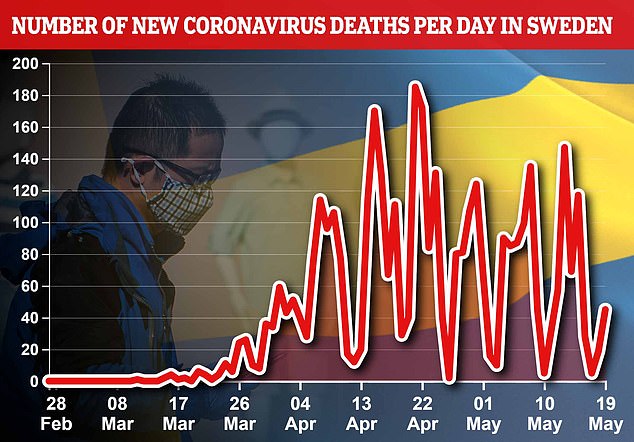 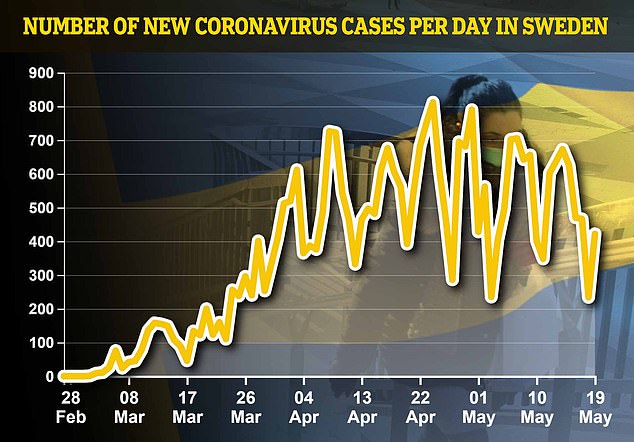 Statistics released on Monday showed that Sweden had its deadliest month in almost three decades in April, with a total of 10,458 deaths recorded in the country of 10.3 million people.

‘We have to go back to December 1993 to find more dead during a single month,’ Tomas Johansson, population statistician at Statistics Sweden, said in a statement.

In total, 97,008 deaths were recorded in Sweden during the whole of 1993, which in turn was the deadliest year since 1918, when the Spanish flu pandemic ravaged the country.

Karin Ulrika Olofsdotter Sweden’s ambassador to the US previously called the country’s number of elderly deaths due to covid-19 a ‘big failure’. 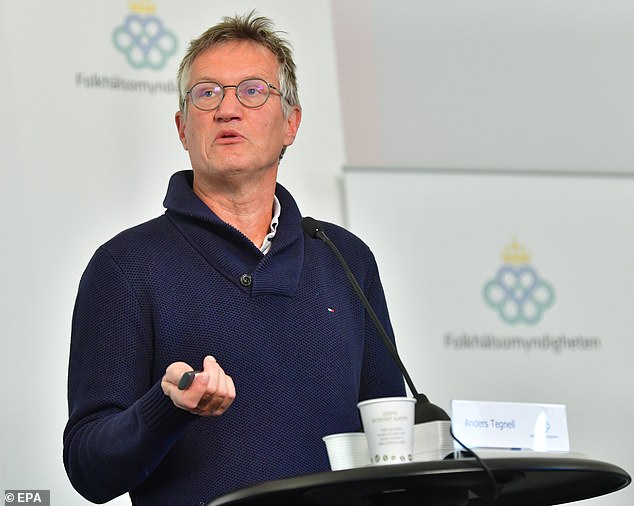 State epidemiologist Anders Tegnell of the Public Health Agency of Sweden speaks during a news conference on a daily update on Covid-19 in Stockholm, Sweden, on May 18, 2020

As the number of deaths passed 3,000 in early May Olofsdotter said 90 per cent of those who died in Sweden were over 70, meaning that around 2,700 elderly people have died of the virus.

Sweden has banned visits to care homes in one of its few restrictions after deciding against a full-scale lockdown, but Sweden’s top virologist Anders Tegnell has previously admitted that more should have been done to protect the elderly.

Tegnell told the daily press conference on Monday: ‘The curves look to be slowly but surely pointing downwards, but there is still a lot of strain on all parts of the healthcare sector.’