Deciding whether to go for a greasy burger, chicken chow mein or a fish and chips is a conundrum that sparks family debates every Friday.

But a new study by Dalhousie University might help you make a decision, as researchers have determined that seafood is more nutritious and climate-friendly than meat.

Ecological economists from Canada and Sweden calculated the nutritional density and climate impacts of different sources of fish.

They found that half of the seafood species they studied had a higher nutrient density and emitted fewer greenhouse gases than beef, pork and chicken.

Of the more common fish eaten in the UK, the species with the lowest climate impacts relative to their nutrition are wild-caught salmon, herring and mackerel.

The findings suggest that policies to promote seafood in diets as a substitute for other animal protein could improve future food security and help address climate change.

Researchers found that half of the seafood species they studied had a higher nutrient density and emitted fewer greenhouse gases than beef, pork and chicken (stock image)

SEAFOOD WITH THE LOWEST CLIMATE IMPACTS RELATIVE TO NUTRITION

Speaking to MailOnline, Peter Tyedmers, a professor in Dalhousie University’s School for Resource and Environmental Studies, said: ‘This work makes clear that many of us can effect real climate impact reductions through the choices that we make in what animal-derived foods we include in our diet.

‘Shifting from beef, pork and often even chicken to seafood options will almost always result in lower production-related emissions that are ultimately going to be necessary if we are to meaningfully address the climate crisis.’

With the world’s population set to hit 8 billion this year, scientists have predicted we will face major food shortages in the future.

This will accompany an increase in the effects of climate change, so challenges could arise in meeting dietary nutritional needs while reducing emissions.

While meat is high in protein, consuming it in large quantities has been linked to heart disease and other health problems.

Its production has devastating effects on the planet, as livestock farming on a massive scale destroys habitats and generates greenhouse gases.

However seafood is known to be a good source of protein, fatty acids, vitamins and minerals.

Professor Tyedmers investigated whether these nutritional benefits weigh up next to the greenhouse gases emitted through its production.

His team analysed the nutrient density and climate impacts of globally important sources of seafood from a broad range of fishery and aquaculture operations. 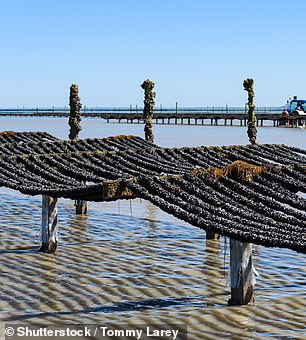 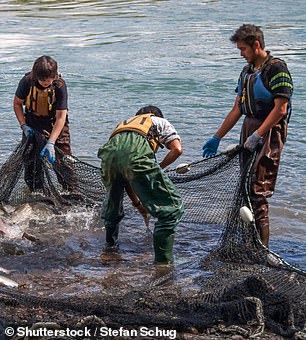 For each seafood product, including farmed mussels (left) and wild caught salmon (right), the researchers calculated a Nutrient Density Score and the greenhouse gases emitted as a proportion of the catch weight (stock images)

WHICH FOODS HAVE THE HIGHEST ENVIRONMENTAL IMPACT?

To assess the climate impacts of the seafood sourced through aquaculture, they identified the kilograms of carbon dioxide emitted per kilogram of live weight from nine appropriate life cycle assessment studies.

For the species sourced through wild capture fisheries, data was used from studies of fishing vessel fuel consumption to calculate the greenhouse gas emissions per tonne of landed catch.

The greenhouse gas emissions for the terrestrial animal-based meats of beef pork and poultry were based on data from published life cycle assessments, while the nutrient data came from the Canada Nutrient File database.

The study, published today in Communications Earth & Environment, reveals that seafood can provide greater nutrition to people at a lower rate of greenhouse gas emissions than meat.

Wild-caught salmon, herring, mackerel and anchovies, as well as farmed mussels and oysters, had the lowest climate impacts relative to their nutritional value.

The fish species with the highest nutritional density was found to be Pink Salmon, with a score of 6.3, however Capelin has the lowest climate impact, emitting 498 kg of carbon dioxide per tonne caught.

In comparison, the greenhouse gas emissions for beef was found to be 56 kg of carbon dioxide per kilogram of edible product, and for pork it was nearly 7 kg.

The researchers conclude that seafood can provide a sustainable source of nutritious food that also benefits the climate.

Professor Tyedmers added: ‘In many ways, this study confirms insights that many of us had a sense of for a long time: that seafood in general are sources of highly nutritious food whose production results in relatively low impacts on the climate, particularly in comparison to the climate impacts of beef, pork and often even chicken.

‘But in confirming this, we have done so with the best available data for the widest set of globally important seafood species that are important in different diets around the world.

‘However, we go further and highlight the great diversity of nutritional attributes of different seafood species that could have relevance for individuals or sub-populations whose diets are limited in some key nutrients.’

HOW DOES FOOD PRODUCTION HURT THE ENVIRONMENT?

Meat and dairy accounts for 57 per cent of food-based greenhouse gas emissions, according to a new computer modelling study.

Broken down by food type: