If we’re to make long-distance space travel a reality then finding a way for humans to hibernate is likely to be key.

This suspended animation, as it is often referred, will be well-known to sci-fi fans after featuring in countless movies and TV shows, including recent Hollywood blockbusters Interstellar and Passengers.

But a new study suggests it may never actually be possible because humans save more energy sleeping than hibernating.

Chilean researchers set out to investigate whether people could hibernate like bears, which would effectively allow us to snooze during trips through space that last longer than a lifetime.

In naturally hibernating mammals – such as bats, several marsupials and rodents – energy expenditure can be reduced by 98 per cent of normal levels.

However, the Universidad Austral de Chile researchers found that hibernation seems to only be beneficial at small sizes.

If we’re to make long-distance space travel a reality then finding a way for humans to hibernate is likely to be key. But a new study suggests it may never actually be possible because humans save more energy sleeping than hibernating

WHAT IS THE NEED FOR SUSPENDED ANIMATION?

In space missions, a human crew and everything that goes along with it have a direct impact on mission mass, as well as number of launches required for the trip.

But putting astronauts into short-term hibernation has been seen as a way that could make space travel more efficient.

One solution that has been mooted is to put humans into a ‘torpor’ state of short-term hibernation, when physiological activity is decreased, usually by a reduced body temperature and metabolic rate.

This would substantially reduce the mass and size of the habitat, which ultimately leads to significant reductions in the amount of mass needed on board.

Black and brown bears, which weigh around 176–880 lbs (80–400 kg), are the largest known hibernators and reduce their resting metabolism by as much as 75 per cent during hibernation.

‘This is a relatively small savings compared with the 95–98 per cent metabolic reduction of a little brown bat, a pigmy possum or a jumping mouse,’ the scientists wrote in their paper.

Working out the likely metabolism of a hibernating human based on our own mass, they found that we save more energy by sleeping than we would if hibernating.

The findings are bad news for sci-fi fans, suggesting humans will never be able to survive in suspended animation during long trips through space.

‘Hibernation is a natural state of suspended animation that many mammals experience and has been interpreted as an adaptive strategy for saving energy,’ the authors wrote in their paper.

‘However, the actual amount of savings that hibernation represents, and particularly its dependence on body mass (the “scaling”) has not been calculated properly.

‘We estimated the scaling of daily energy expenditure of hibernation (DEEH), covering a range of five orders of magnitude in mass.

‘We found that DEEH scales isometrically with mass, which means that a gram of hibernating bat has a similar metabolism to that of a gram of bear, 20,000 times larger.’

Previous studies of dwarf lemurs, which live only in Madagascar and are man’s closest genetic relatives known to hibernate, show that during periods of dormancy, which last up to eight months, their normal heart rate of 180 beats a minute can drop to as low as four. 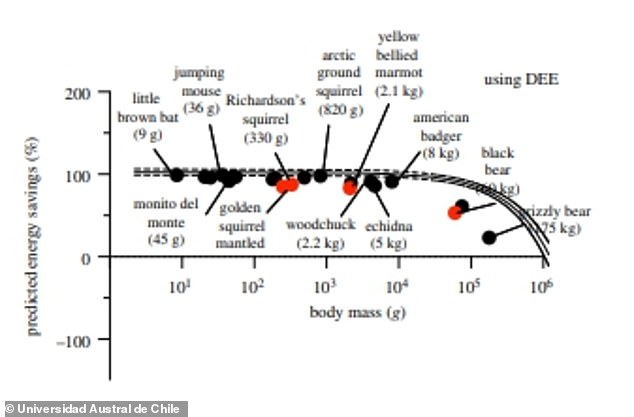 This graph shows how much energy various animals save while hibernating, compared to their body mass 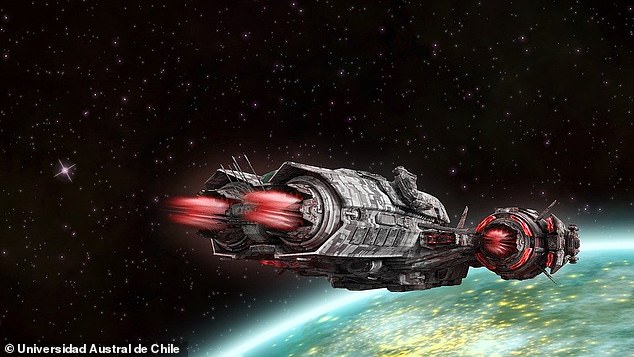 The findings are bad news for sci-fi fans, suggesting humans will never be able to survive in suspended animation during long trips through space

Since these animals share about 97 per cent of our genetic make-up, it had been suggested that ‘humans might already have the mechanisms that confer the ability to hibernate present in our genome’.

It had also been hoped that from hibernating brown and black bears, for example, we might learn how to prevent and treat a wide range of diseases, according to Maria Berg von Linde, a cardiologist at Sweden’s Orebro University.

‘If humans spent half the year in a physically inactive state without eating, defecating or urinating, they would suffer heart failure, thrombosis, organ injuries, blood poisoning and more.

‘The bear has solved most of the health challenges faced by humans. Understanding and applying [how] could lead to major discoveries with implications for treating human disease.’

The latest research has been published in the journal Proceedings of the Royal Society B.