A survey of billions of stars in the Milky Way could have captured signs of intelligent life — and amateur astronomers are being encouraged to search for them.

Experts at the SETI Institute are developing state-of-the-art techniques to detect signatures from space that indicate the possibility of extraterrestrial life.

These so-called ‘technosignatures’ can range from the chemical composition of a planet’s atmosphere, to laser emissions and structures orbiting other stars.

A survey of billions of stars in the Milky Way could have captured signs of intelligent life — and amateur astronomers are being encouraged to search for them. Pictured, the Very Large Array

‘Determining whether we are alone in the universe, as technologically capable life, is among the most compelling questions in science,’ said Tony Beasley, director of the National Radio Astronomy Observatory telescope based in Virginia.

SETI scientists plan to develop a system that will ‘piggyback’ on the so-called Very Large Array (VLA) telescope based in Mexico to provide data for their technosignature search system.

‘As the VLA conducts its usual scientific observations, this new system will allow for an additional and important use for the data we’re already collecting,’ Dr Beasley added.

Life forms, whether intelligent or not, should produce detectable indicators such as large amounts of oxygen, smaller amounts of methane and a variety of other chemicals, the experts said.

So, in addition, scientists are also developing computer models to simulate extraterrestrial environments that can help support future searches for habitable planets and life beyond the solar system.

‘Upcoming telescopes in space and on the ground will have the capability to observe the atmospheres of Earth-sized planets orbiting nearby cool stars,’ said NASA astronomer Victoria Meadows.

‘So, it’s important to understand how best to recognise signs of habitability and life on these planets.’

‘These computer models will help us determine whether an observed planet is more or less likely to support life.’

Meanwhile, SETI’s Breakthrough Listen Initiative — which launched in 2015 to ‘listen’ for signals of alien life — has released nearly two petabytes of data from the most comprehensive survey yet of radio emissions from the Milky Way.

The organisation is now inviting the public to search the data gathered from various telescopes around the world and look for signals from intelligent civilisations. 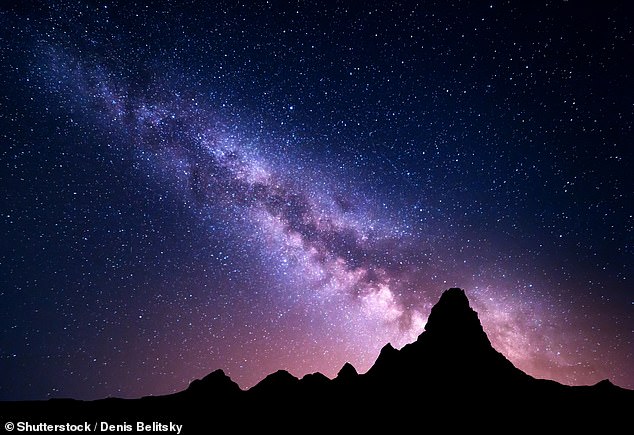 SETI’s Breakthrough Listen Initiative — which launched in 2015 to ‘listen’ for signals of alien life — has released nearly two petabytes of data from the most comprehensive survey yet of radio emissions from the Milky Way, pictured

‘For the whole of human history, we had a limited amount of data to search for life beyond Earth. So, all we could do was speculate,’ said Breakthrough initiative founder Yuri Milner.

‘Now, as we are getting a lot of data, we can do real science and — by making this data available to general public — so can anyone who wants to know the answer to this deep question.’

The initiatives and strategies in expanding the search for extraterrestrial life were presented at the the annual meeting of the American Association for the Advancement of Science in Seattle.

WHAT IS THE VERY LARGE TELESCOPE?

The European Southern observatory (ESO) built the most powerful telescope ever made in the Atacama Desert of northern Chile.

It is called the Very Large Telescope (VLT) and is widely regarded as one of the most advanced optical instruments ever made.

It consists of four telescopes, whose main mirrors measures 27 feet (8.2 metres) in diameter.

The large telescopes are called Antu, Kueyen, Melipal and Yepun.

The European Southern observatory (ESO) built the most powerful telescope ever made in the Atacama Desert of northern Chile and called it the Very Large Telescope (VLT).

The first of the Unit Telescopes, ‘Antu’, went into routine scientific operations on April 1, 1999.

The telescopes can work together to form a giant ‘interferometer’.

This interferometer allows images to be filtered for any unnecessary obscuring objects and, as a result, astronomers can see details up to 25 times finer than with the individual telescopes.

It has been involved in spotting the first image of an extrasolar planet as well as tracking individual stars moving around the supermassive black hole at the centre of the Milky Way.

It also observed the afterglow of the furthest known Gamma Ray Burst,