Speaking at the Tory Party conference, the Cabinet Office minister said it is time for civil servants to be ‘closer to where the action is’, and he argued home-working during the pandemic proves the upheaval can work.

The PM has vowed to do more to create opportunities outside the capital, following his landslide election victory in December which saw traditionally Labour-voting areas across parts of the north of England, the Midlands and northern Wales vote Tory for the first time.

The virtual Tory conference opened on Saturday with the announcement that the party plans to open a second headquarters in Leeds in a bid to ‘show our commitment to the blue wall seats’, according to co-party chairman Amanda Milling.

Ms Milling said she is aiming to have the headquarters open next year.

Speaking at the Tory Party conference, Michael Gove (pictured) said it is time for civil servants to be ‘closer to where the action is’, and he argued home-working during the pandemic proves the upheaval can work

With the party looking to create jobs outside of London, Mr Gove said the Civil Service should follow suit.

Speaking in conversation with West Midlands Mayor Andy Street, Mr Gove said: ‘Far too many Government jobs tend to be in the Westminster and Whitehall village.

‘I think we need some of the big Government departments and the big decision makers not in London but closer to where the action is in the North West, the West Midlands, Teesside and Tyneside.’

Last week, the most senior civil servant in Mr Gove’s department told MPs that large chunks of the Whitehall estate could be put up for sale as civil service jobs are pushed out across the country.

Mr Gove echoed those words on Saturday, arguing those with public sector career ambitions should not have to move to London.

‘I want it to be the case that, whether you are in Middlesbrough, Mansfield or Manchester, that economic and career opportunity is close to home in the community you care about,’ he added.

He said online working developed during the pandemic could help pave the way for departments to be based away from Westminster. 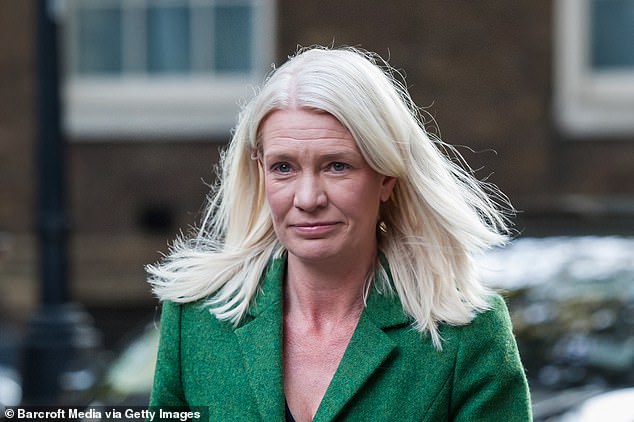 The virtual Tory conference opened on Saturday with the announcement that the party plans to open a second headquarters in Leeds in a bid to ‘show our commitment to the blue wall seats’, according to co-party chairman Amanda Milling (pictured)

‘The key thing about the changes that have been enabled from working from home is we can say, ‘You don’t need to have a concentration of people in a Whitehall department operating in that way’,’ Mr Gove added.

‘You can have the decision makers dispersed, you can have people who are operating digitally who may come in for particular meetings but who can live and work and contribute to the life of the communities that they love outside of London, or outside some of our major urban centres.’

Ahead of this year’s conference, the Prime Minister said he wants to create a ‘Generation Buy’, where young people are helped to purchase homes with mortgages requiring low deposits.

The Tory leader told the Telegraph he believes a ‘huge’ number of people feel excluded from home ownership in the UK, but his Government will ‘fix’ the issue by helping people get on to the property market by encouraging banks to look again at offering 95 per cent mortgage loans.

But housing charity Shelter accused the Prime Minister of ‘selling pipedreams’, and called for him to ‘start facing reality’.

Chief executive Polly Neate said: ‘Offering up huge loans and even more debt is the wrong answer to the much bigger problem of rising housing insecurity in this country.’