Wastewater plants have been told by the government they may dispose of sewage not fully treated due to a shortage of chemicals caused by the lorry driver crisis.

Some of the chemicals used in the sewage treatment process have become one of the latest products left in short supply by the driver shortage, caused by a combination of Brexit and the Covid pandemic.

Plants were told they may dispose of effluent not fully treated because of disruption caused by ‘supply chain failure’ in a regulatory position statement issued on Tuesday.

Wastewater plants have been told by the government they may dispose of sewage not fully treated due to a shortage of chemicals caused by the lorry driver crisis. Pictured: A Water and sewage treatment station by the Horsham, West Sussex (file photo)

The statement came from the Environment Agency, which introduced a waiver that would allow some companies to bypass the third stage in the treatment process if they are not in possession of the right chemicals.

Defra (the Department for Environment, Food and Rural Affairs) said the waiver specifically related to a shortage of ferric sulphate, an acidic solution used to suppress the growth of algae.

The government agency said the regulatory position statement (RPS) would apply until the end of the year, after which companies would required a permit in order to continue the practice.

The temporary relaxation would allow ‘discharges from water treatment works that cannot comply with permit conditions because of an unavoidable shortages of chemicals to treat effluent’.

In the regulatory update to companies, the government said:  You may not be able to comply with your permit if you cannot get the chemicals you use to treat the effluent you discharge because of: the UK’s new relationship with the EU; coronavirus (COVID-19); other unavoidable supply chain failures. 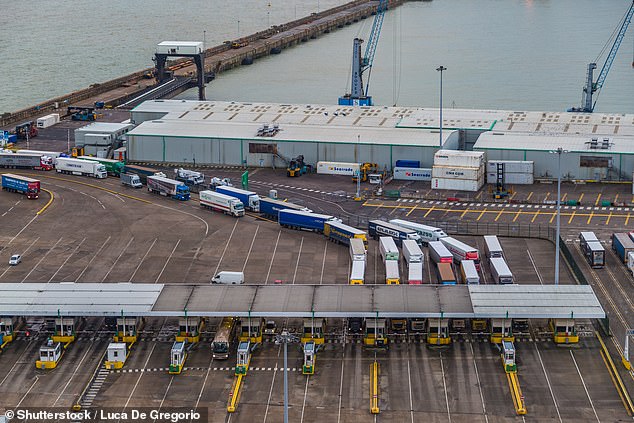 The chemical industry is the latest sector to be hit by the shortage or lorry drivers caused by Brexit and the global pandemic. Pictured: Lorries queue to exit Dover (file photo)

Speaking to The Guardian, a government spokesperson said water supply consumers would not be affected by the relaxation, and waste companies hoping to benefit from the RPS would need prior approval from Defra.

They added that the measure being taken was a precautionary one as no company had yet identified a shortage of ferric sulphate.

The chemical industry is the latest sector to be hit by the shortage or lorry drivers caused by Brexit and the global pandemic.

In recent weeks, McDonald’s ran out of milkshakes, Ikea has struggled to supply around 1,000 products and Nando’s restaurant has been hit by chicken shortages.

The Chemical Business Association told The Guardian that it had been warning senior government officials – including Boris Johnson – since June last year about the potential disruption of important chemicals used in water and agriculture industries.

A recent survey of the association’s members found that 93 percent were experiencing haulage shortages, up from 61 percent in this year’s first quarter.

There are fears that the chemical industry will be hit harder than other industries due to additional requirements for anyone transporting hazardous substances.

‘We are seeing a real crunch on the driver front,’ said Tim Doggett, CEO of the CBA, told the newspaper. ‘My concern and what I have been said to the Department for Transport this morning is the game of musical chairs we will see.’

He said that when faced with the option of two jobs that pay the same- one which requires specific qualifications and the handling of dangerous substances, and another that does not – drivers would likely take the easier option.

A government spokesperson stressed to The Guardian that the action was ‘strictly time-limited,’ and that there were measures in place to protect the environment. 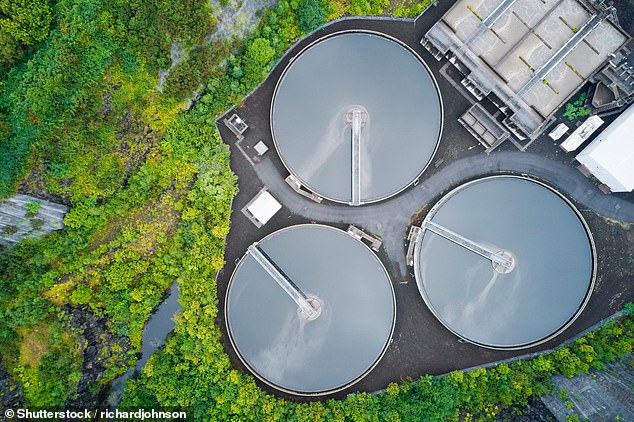 ‘The most sensitive and high-risk watercourses will not be affected and any company planning to make use of this short-term measure must first agree its use with the Environment Agency, which will be checking compliance,’ they said.

According to the Confederation of British Industry, which represents 190,000 companies, a ‘perfect storm’ from Brexit and the pandemic has left businesses battling shortages of lorry drivers, waiters, chefs and construction workers.

Director general Tony Danker warned yesterday that the ‘acute’ skills shortages will extend into yet more industries and may not resolve themselves until 2023.

The Government’s ambition to turn the UK into a ‘more high-skilled and productive’ economy is right, he said, but argued ministers should implement short-term solutions such as relaxing immigration rules to help hard-hit industries.

Hundreds of thousands of overseas workers, who left Britain during the pandemic, have stayed abroad while others left in the face of stricter immigration rules following Brexit.

Mr Danker said: ‘While the CBI and other economists still predict growth returning to pre-pandemic levels later this year, furlough ending is not the panacea some people think will magically fill labour supply gaps. These shortages are already affecting business operations.

‘The Government’s ambition that the UK economy should become more high-skilled and productive is right, but implying that this can be achieved overnight is simply wrong.

‘Some members suggest it could take two years rather than a couple of months for labour shortages to be fully eliminated.’ 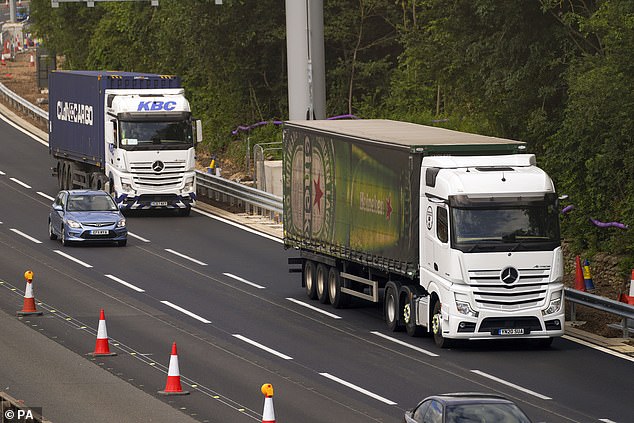 The shortages have disrupted firms as they battle to bounce back from the pandemic, put pressure on wages and prices and threaten to chip away at Britain’s fragile recovery.

Restaurants have had to shorten hours despite booming demand from Britons on staycation, and hotels have reported limiting the number of bookable rooms because they do not have enough staff to launder guests’ linen.

Delivery times for some goods such as kitchens and furniture have doubled, while gaps in supermarket shelves have become a regular sight for shoppers.

Last week Ikea apologised to customers after 1,000 of its products were disrupted by the shortage of lorry drivers.

To fill gaps in their workforce Tesco and Asda have offered £1,000 starting bonuses to attract lorry drivers, while Amazon is offering £1,000 ‘golden hellos’ to attract new warehouse workers.

The end of the Coronavirus Job Retention Scheme is only expected to provide temporary relief due to a mismatch in skills between vacant jobs and the newly unemployed.

There were still 1.9million on furlough at the end of June and economists predict that between 150,000 and 280,000 will lose their jobs when support is withdrawn at the end of the month. There are currently 1.6million out of work.

Yesterday Wagamama revealed it was struggling to hire chefs across 30 sites.

Its boss Thomas Heier said many hospitality workers were taking jobs as drivers and warehouse workers as they offer higher wages and cash sign-on bonuses.

Wagamama is currently offering £10.45 per hour for a head chef in London. The living wage in the capital is £10.85.

The news of the updated regulation on sewage disposal comes as the UK is preparing to host the COP26 climate summit in Glasgow from October 31 to November 12. 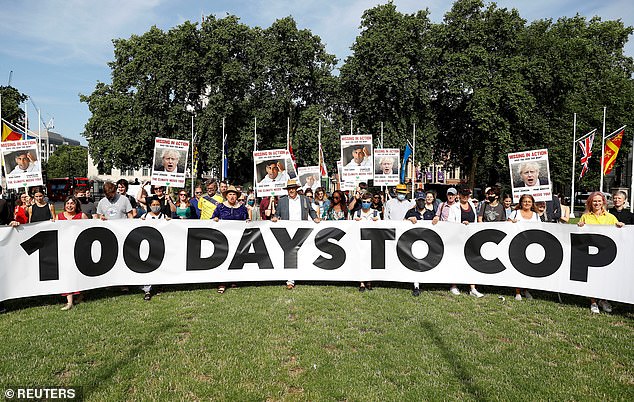 COP26, is taking place in Glasgow from October 31 to November 12. Pictured: Protesters from the Climate Coalition demonstrate, with 100 hundred days to go before the start of the COP26 climate summit, in Parliament Square, London, Britain, July 23, 2021

The talks are aiming to spur more ambitious commitments by countries to achieve net zero carbon emissions by 2050 and keep the global average temperature rise to well below 2 degrees Celsius during this century, in line with a 2015 Paris accord.

The United Nations on Tuesday rejected a call by a global non-government network to postpone the summit on the grounds that a lack of Covid vaccines risked sidelining developing countries.

‘For now, no changes are planned, but we understand the concerns,’ UN deputy spokesman Farhan Haq said of the UN Climate Change Conference set to kick off October 31 in Glasgow, Scotland.

Earlier Tuesday the Climate Action Network, a global collection of more than 1,500 climate NGOs, called on Britain to postpone COP26 amid an increase in Covid-19 cases, unequal global vaccine rollout, and stringent quarantine requirements for dozens of countries seeking to attend the 12-day UN talks.

But the United Nations joined the host government in countering that the climate crisis was too urgent for the meeting to be put off.

‘The global scientific community has made clear that climate change is now a global emergency,’ Haq said.

‘Only an urgent and major step up in climate action can keep the goals of the Paris Agreement within reach, and protect the most vulnerable countries and communities from worsening climate impacts.’

Haq said UN authorities and offices are working with the British government ‘to make COP as safe and inclusive as possible, including offering vaccines to all participants and paying for hotel quarantine costs where quarantine is required.’