Shoppers have accused Superdrug of ‘female erasure’ after it launched a range of plant-based sanitary towels for ‘people who menstruate’ rather than ‘women’.

The £3.99 ‘Luna’ brand is thought to be the first sold by the high street store to adopt more inclusive language on its packaging.

But it has caused consternation on social media with women attacking it for ‘playing games’ with gender and pointing out that ‘men don’t generally menstruate’.

Some have even poked fun at the product saying it would make a great present for their fathers or joking, ‘Just wait until JK Rowling hears about this!’

Others have, however, welcomed the change as a sign of inclusion and congratulated Superdrug for its efforts.

The change comes after the Harry Potter author faced aggressive backlash on social media when she tweeted an article which used the phrase ‘people who menstruate’.

‘I’m sure there used to be a word for those people,’ she said. ‘Someone help me out. Wumben? Wimpund? Woomud?’

Shoppers have ridiculed Superdrug for selling £3.99 sanitary towels that are made for ‘people who menstruate’ rather than women 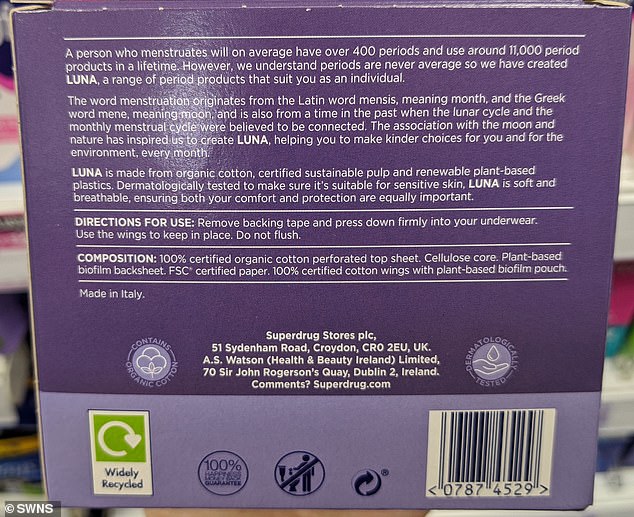 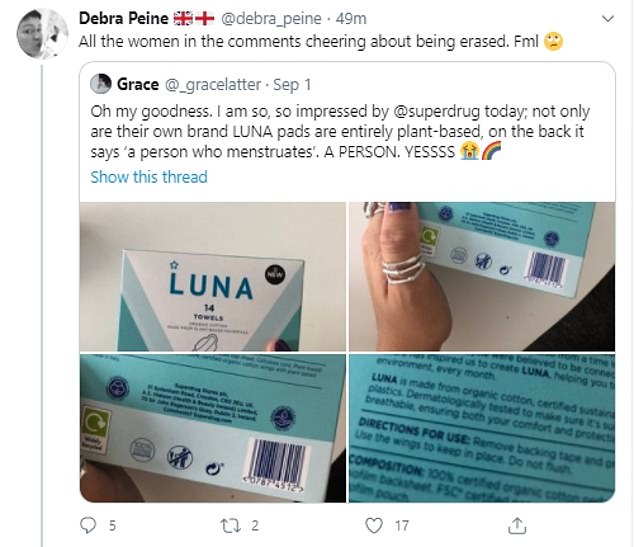 The back of the Luna product, which appeared in stores this summer, reads: ‘A person who menstruates will on average have over 400 periods and use around 11,000 period products in a lifetime.

‘However, we understand periods are never average so we have created LUNA, a range of period products that suit you as an individual.

‘(It) is made from organic cotton, certified sustainable pulp and renewable plant-based plastics. Dermatologically tested to make sure it’s suitable for sensitive skin, (the product) is soft and breathable, ensuring both your comfort and protection are equally important.’

Social media users have lined up to attack the ‘woke’ product for its failure to mention the word ‘women’.

‘Not putting women in a product related to menstruation (only women menstruate) sounds pretty erasing to me,’ said one.

‘Female erasure – cheer it on ladies!,’ said a second, while a third expressed dismay at all the women ‘cheering about being erased’ in the comments. 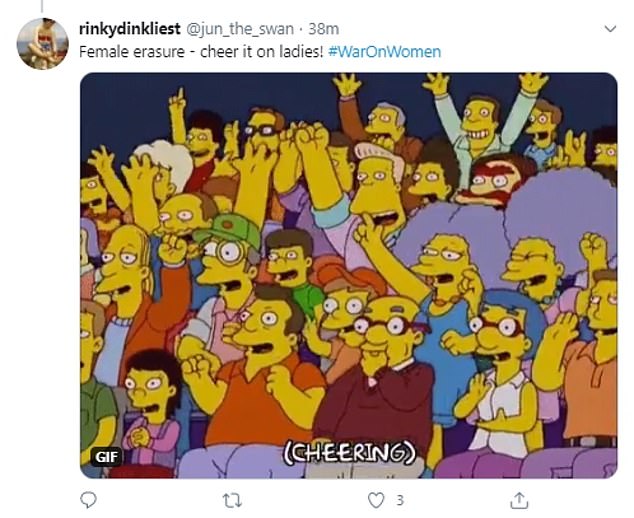 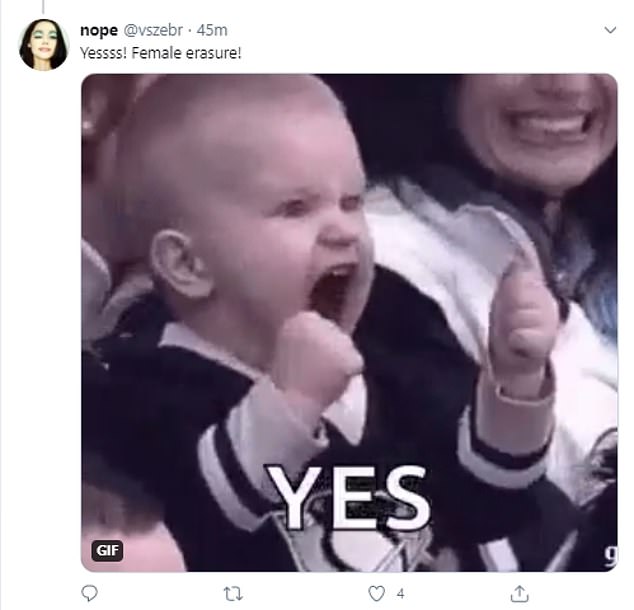 ‘A person who menstruates will on average have over 400 periods and use around 11,000 period products in a lifetime.

‘However, we understand periods are never average so we have created LUNA, a range of period products that suit you as an individual.

‘The word menstruation originates from the Latin word mensis, meaning month, and the Greek word mene, meaning moon, and is also from a time in the past when the lunar cycle and the monthly menstrual cycle were believed to be connected.

‘The association with the moon and nature has inspired us to create LUNA, helping you to make kinder choices for you and for the environment, every month.

‘(It) is made from organic cotton, certified sustainable pulp and renewable plant-based plastics.

‘Dermatologically tested to make sure it’s suitable for sensitive skin, (the product) is soft and breathable, ensuring both your comfort and protection are equally important.’

Criticising the product, another woman wrote: ‘Sorry, not trying to be rude or ignorant but what am I not getting? Men don’t generally menstruate.’

And yet another added: ‘How environmentally friendly is it to purchase a product one has no real use for?’

Some even joked about the Luna product, saying: ‘Just wait until JK Rowling hears about this!’

And above a picture of a woman clenching her face in anger, one Tweeter wrote: ‘A certain children’s author reading this right now.’

Others have, however, welcomed the product.

One Twitter user wrote:’ Oh my goodness. I am so, so impressed by Superdrug today; not only are their own brand LUNA pads are entirely plant-based, on the back it says ‘a person who menstruates’. A PERSON. YESSSS.’

Another added: ‘This is brilliant! Well done, Superdrug.. Have been a huge fan of the own brand tampons since I was 15 and this just makes me love the store even more. Period champions!’

The communications assistant for LGBTQ+ charity Mermaids, Jake Edwards, also welcomed the change, saying: ‘As a trans person who still experiences periods, I dread the days when my supplies start running low.

‘I run through a million scenarios of people staring at me, questioning me, laughing behind my back. Now I can confidently walk into a Superdrug and if anyone challenged me I could point to the packet and say “look, this is made for me”.

‘For many, changes like this might seem pretty small – insignificant even – but for trans people, it can help them feel safe and seen.

‘Periods have so much stigma and shame attached to them, especially for trans people.

‘For trans men and non-binary people it can be a reminder of something deeply upsetting so anything that combats that can only be a good thing.

‘When young trans men are experiencing their first period, making sure they’re acknowledged will bring huge relief. At Mermaids, we applaud Superdrug!’ 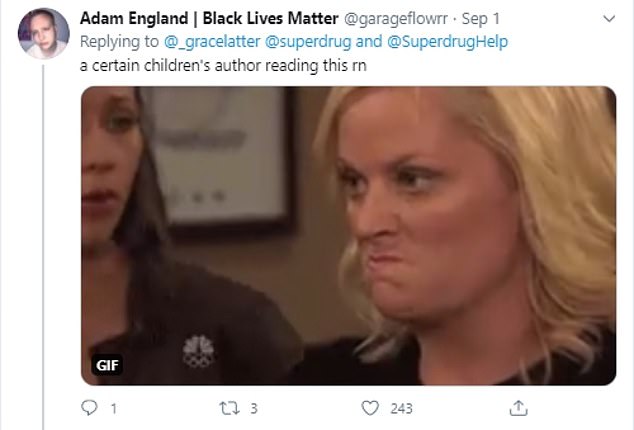 A spokesman for Superdrug explained that the product was created to help them ‘champion inclusivity and diversity’ as they are ‘committed to ensuring all of our employees, communities and customers feel seen and included’.

‘When writing the copy for the products we were aware that there could be customers of this range who are currently transitioning from one sex to another or who identify as Non-Binary but will still be menstruating, alongside the women that use the products,’ they said.

‘We therefore felt ‘person’ was a more inclusive noun to use than “woman”.

‘We are continuing to review all new products and the language we use throughout the business, to ensure we are being as inclusive as possible.’

Each packet of Luna contains 14 towels. It has achieved a rating of 3.7 stars on their website since it was launched. 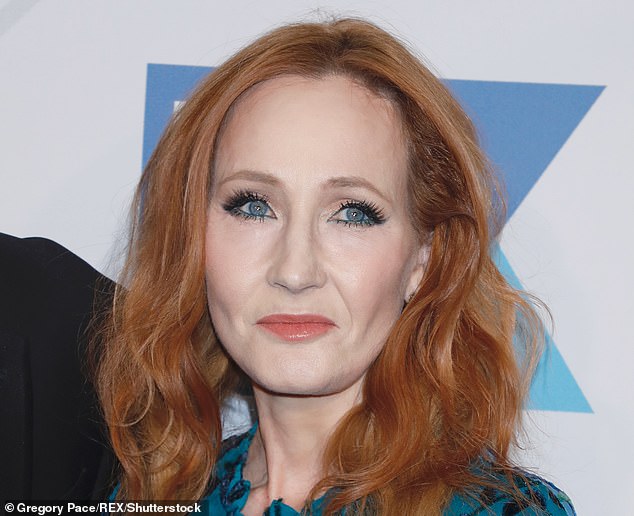 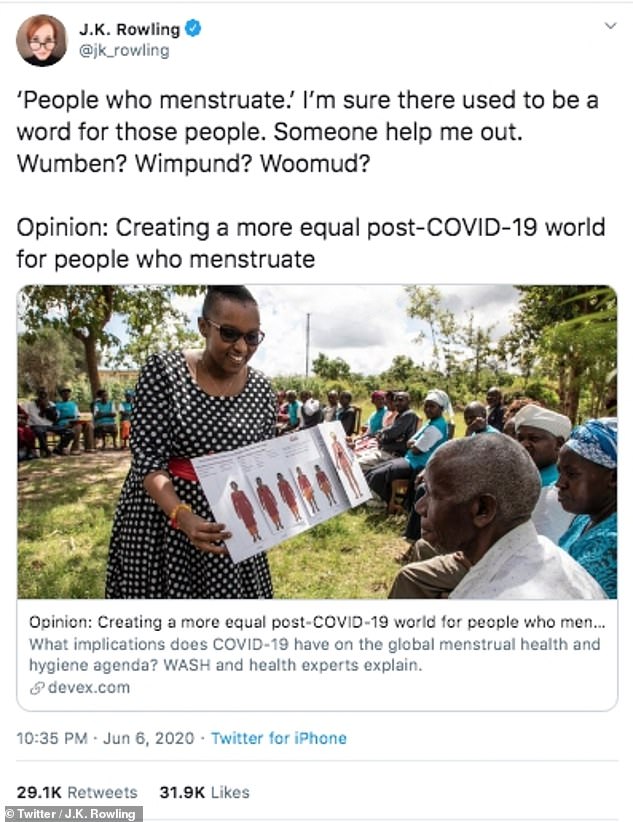 The Harry Potter author faced a barrage of criticism for questioning the phrase ‘people who menstruate’. In tweet this June, Rowling wrote: ‘I’m sure there used to be a word for those people. Someone help me out. Wumben? Wimpund? Woomud?’

JK Rowling sparked controversy in June after tweeting about an article that said ‘people who menstruate’ instead of ‘women’.

She faced widespread criticism which led to her handing back a human rights award that she was given by the US Kennedy family after one of its members also criticised her views.

Rowling responded on her website: ‘Kerry Kennedy recently felt it necessary to publish a statement denouncing my views.

‘The statement incorrectly implied that I was transphobic, and that I am responsible for harm to trans people. I absolutely refute the accusation.

‘In solidarity with those who have contacted me but who are struggling to make their voices heard, and because of the very serious conflict of views between myself and (The Kennedy Foundation), I feel I have no option but to return the Ripple of Hope award.’