New supercomputer simulations show how the Moon may have formed through the collision of Earth with a Mars-sized planet called Theia about 4.5 billion years ago.

UK scientists have produced several animations of simulation scenarios, each showing a different amount of spin ‘wandering planet’ Theia may have had as it approached Earth.

Each simulation depicts various explosive patterns of rocky detritus emanating from the point of impact, which may have eventually clumped to form the Moon.

The simulations are based on what’s generally known to astronomers as the ‘Big Splash’ theory or ‘giant-impact hypothesis’.

According to the theory, Theia, which was around 3,792 miles in diameter, smashed into Earth with a diameter of 7,917 miles, created a ring of debris around our home planet that eventually came together to form the Moon.

The event – about 4.45 billion years ago and 150 million years after the Solar System formed – is the most pervasive idea for explaining how relatively large the Moon is compared with other rocky bodies.

‘Collision animation’ shows the impact with a non spinning Theia. It’s the same as ‘Impactor without spin’ but from a different point of view.

‘By adding different amounts of spin to Theia in simulations, or by having no spin at all, it gives you a whole range of different outcomes for what might have happened when the early Earth was hit by a massive object all those billions of years ago,’ said study author Sergio Ruiz-Bonilla at Durham University.

‘It’s exciting that some of our simulations produced this orbiting clump of material that is relatively not much smaller than the Moon, with a disc of additional material around the post-impact Earth that would help the clump grow in mass over time.

‘I wouldn’t say that this is the Moon, but it’s certainly a very interesting place to continue looking.’

In partnership with the University of Glasgow, the Durham scientists ran their supercomputer simulations on the DiRAC High-Performance Computing facility.

DiRAC’s computing resources – a vast collection of processors, wires and other hardware – are distributed over four university sites including Durham.

Researchers tracked the rocky material that would have exploded from the source of the collision and possibly formed to create the Moon.

The simulated collision with the early Earth produced different results depending upon the size and direction of Theia’s initial spin, from no spin at all to ‘spinning like a pool ball’, both clockwise and anti-clockwise.

At one extreme, with a maximum spin in a clockwise direction, the collision merged the two objects together.

With a maximum spin going anti-clockwise, meanwhile, there was a grazing ‘hit-and-run’ impact.

Graphic from the research paper. The yellow planet is Theia and the black arrows represent their different spinning rates. The two left ones (l=-1/2 and l=-1/4) resulted in mergers. The middle box (showing a simulations involving no spin) and the right one next to it resulted in orbiting clumps or moon candidates. The simulation depicted in the far right box resulted in a ‘hit-and-run impact’

And the simulation where no spin was added to Theia produced a self-gravitating clump of material with a mass of about 80 per cent of the Moon.

When a small amount of spin was added to the simulations, another Moon-like object was created.

The resulting clump, which was shown to settle into an orbit around the post-impact Earth, would’ve grown by sweeping up the disc of debris surrounding our planet.

The simulated clump also had a small iron core, similar to that of the Moon, with an outer layer of materials made up from the early Earth and Theia. 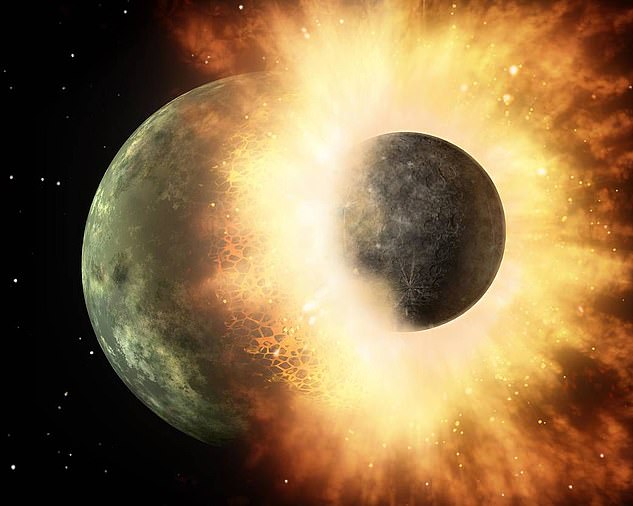 ‘We get a number of different outcomes depending upon whether or not we introduce spin to Theia before it crashes into the early Earth,’ said study author Dr Vincent Eke at Durham University.

‘It’s particularly fascinating that when no spin or very little spin is added to Theia, the impact with the early Earth leaves a trail of debris behind, which in some cases includes a body large enough to deserve being called a proto-Moon.

‘There may well be a number of possible collisions that have yet to be investigated that could get us even closer to understanding just how the Moon formed in the first place.’

While the simulations are not definitive proof of the Moon’s origin, the experts add, they represent be a promising stage in understanding how our nearest neighbour might have formed.

Research in March this year claimed to prove the Big Splash theory, based on traces of Theia in lunar rocks.

Researchers from the University of New Mexico examined the oxygen isotopes in Moon rocks brought back to Earth by Apollo astronauts.

They discovered differences in oxygen isotopes – an indicator of the origin of the material – between the Moon rocks and Earth rocks, which may have come from the remains of Theia after the impact.

However, another study in May reported the discovery of carbon ions from the Moon’s surface. 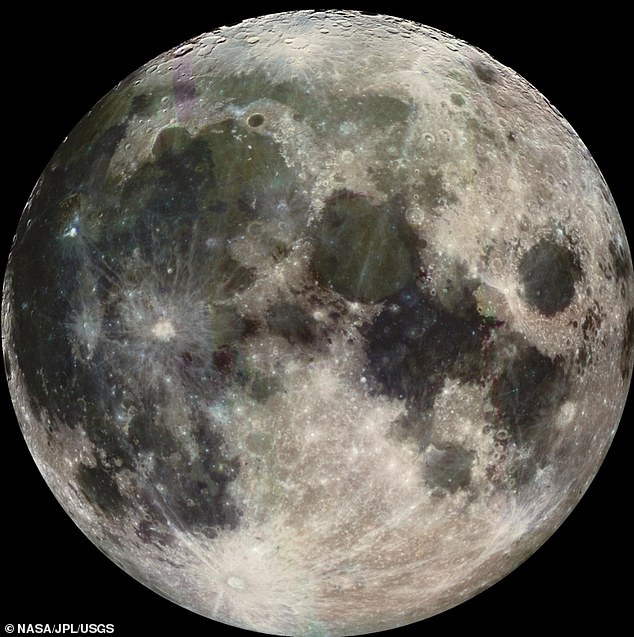 The NASA Galileo spacecraft took this image of the Moon on December 7, 1992 on its way to explore the Jupiter system in 1995-97

Carbon should have been utterly vaporised by the intense temperatures generated in the colossal impact event.

The findings of this new study have been published in the journal Monthly Notices of the Royal Astronomical Society.

The research team now plan to run further simulations altering the mass, speed and spinning rate of both the target and impactor to see what effect this has on the formation of a potential Moon.

Many researchers believe the moon formed after Earth was hit by a planet the size of Mars billions of years ago.

This is called the giant impact hypothesis.

The theory suggests the moon is made up of debris left over following a collision between our planet and a body around 4.5 billion years ago.

The colliding body is sometimes called Theia, after the mythical Greek Titan who was the mother of Selene, the goddess of the moon.

Many researchers believe the moon formed after Earth was hit by a planet the size of Mars billions of years ago. This is called the giant impact hypothesis

But one mystery has persisted, revealed by rocks the Apollo astronauts brought back from the moon: Why are the moon and Earth so similar in their composition?

Several different theories have emerged over the years to explain the similar fingerprints of Earth and the moon.

Perhaps the impact created a huge cloud of debris that mixed thoroughly with the Earth and then later condensed to form the moon.

Or Theia could have, coincidentally, been chemically similar to young Earth.

A third possibility is that the moon formed from Earthen materials, rather than from Theia, although this would have been a very unusual type of impact.